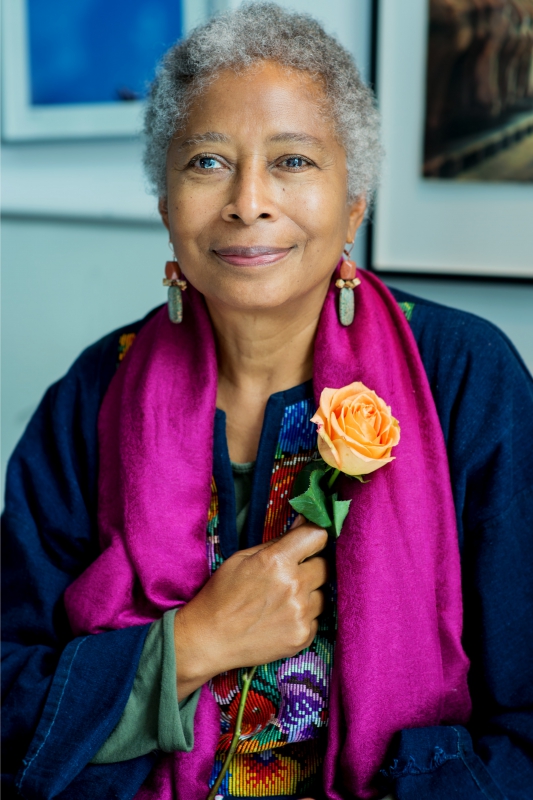 An Evening with ALICE WALKER
“The Cushion in the Road: Meditation and Wandering as the Whole World Awakens (Essays) & “The World Will Follow Joy: Turning Madness Into Flowers” (New Poems)
Hosted by Brian Edwards Tiekert

Alice Walker is an internationally celebrated author, poet and activist whose books include seven novels, four collections of short stories, four children’s books, and many volumes of essays and poetry. She’s best known for The Color Purple, the 1983 novel for which she won the Pulitzer Prize—the first African American woman to win the Pulitzer Prize in Fiction—and the National Book Award. The award-winning novel served as the inspiration for Steven Spielberg’s 1985 film and was adapted for the stage, opening at New York City’s Broadway Theatre in 2005, and capturing a Tony Award for best leading actress in a musical in 2006.  Walker has written many additional best sellers; among them, Possessing the Secret of Joy (1992), which detailed the devastating effects of female genital mutilation and led to the 1993 documentary “Warrior Marks,” a collaboration with the British-Indian filmmaker Pratibha Parmar, and We are the Ones We Have Been Waiting For: Inner Light in a Time of Darkness.(2009). Her work has been translated into more than two dozen languages, and her books have sold more than fifteen million copies. Along with the Pulitzer Prize and the National Book Award, Walker’s awards and fellowships include a Guggenheim Fellowship and a residency at Yaddo. In 2006, she was honored as one of the inaugural inductees into the California Hall of Fame. In 2007, her archives were opened to the public at Emory University. In 2010 she presented the key note address at The 11th Annual Steve Biko Lecture at the University of Cape Town, South Africa, and was awarded the Lennon/Ono Peace Grant in Reykjavik, Iceland. (Walker donated this latter award to an orphanage for the children of AIDS victims in East Africa.) She served as jurist (2010 and 2012) for two sessions of The Russell Tribunal on Palestine. In Cape Town, South Africa, and New York City, New York. Recent works include: Overcoming Speechlessness: A Poet Encounters the Horror in Rwanda, Eastern Congo and Palestine/Israel; Hard Times Require Furious Dancing; The World Has Changed: Conversations with Alice Walker. .
An activist all of her adult life, Walker believes that learning to extend the range of our compassion is activity available to all. She is a staunch defender not only of human rights, but of the rights of all living beings. She is one of the world’s most prolific writers, yet tirelessly continues to travel the world to literally stand on the side of the poor, and the economically, spiritually and politically oppressed. She also stands, however, on the side of the revolutionaries, teachers and leaders who seek change and transformation of the world.

When she returned from Gaza in 2008, Walker said, “Going to Gaza was our opportunity to remind the people of Gaza and ourselves that we belong to the same world: the world where grief is not only acknowledged, but shared; where we see injustice and call it by its name; where we see suffering and know the one who stands and sees is also harmed, but not nearly so much as the one who stands and sees and says and does nothing."

http://www.brownpapertickets.com/event/412879
Add Your Comments
Support Independent Media
We are 100% volunteer and depend on your participation to sustain our efforts!