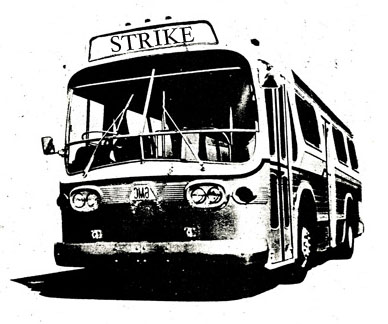 We stand in solidarity with striking city, BART, and AC Transit workers in the bay area. In the past several years, corporations and the ruling elite have racked up massive profits while wages have fallen or stagnated, benefits and pensions have been attacked, and working conditions have worsened. People are working more hours for less money.

At the same time, fares on both BART and AC have gone up incredibly in the last several decades. These increases have pitted riders and operators against each other when in reality we have the same enemies, the transit bosses and corporations cashing in on poor and working people. More police on transit lines and buses won't make us safer. We need only look to the recent police murders of Oscar Grant in Oakland and Kenneth Harding, Jr. in San Francisco to see that the racist policy of fare enforcement leads to further repression of communities of color in particular and the working class as a whole in general.

STOP THE FARE INCREASES!
THROW THE BOSSES UNDER THE BUS!
RIDERS DON'T PAY, DRIVERS DON'T COLLECT!
Add Your Comments
LATEST COMMENTS ABOUT THIS ARTICLE
Listed below are the latest comments about this post.
These comments are submitted anonymously by website visitors.