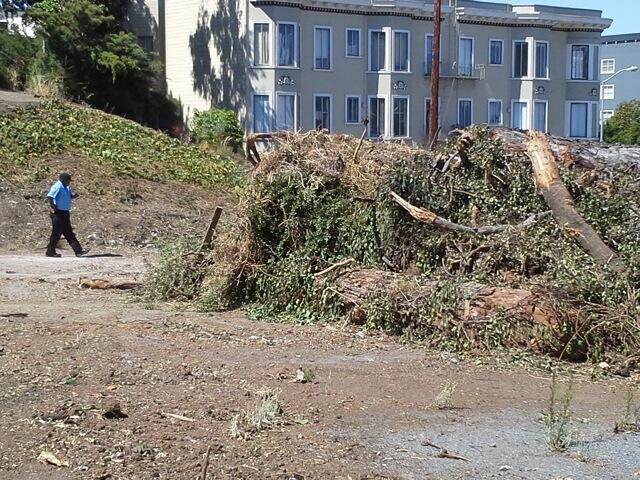 As with many things, I was stuck at work when friends, neighbors, and those brave enough to face down the San Francisco Police tried to re-take Gezi Gardens last Friday. In between breaks at work I attempted to check the twitter stream and see how the march was doing and texted friends to make sure that they weren't in jail. After talking to several participants who attended the march and attempted to re-occupy the garden I feel on one hand great admiration for those brave enough to risk a nightstick to the back of the head but also great sadness for the destruction of Gezi Gardens. Many of the youth that helped occupy the park were some of the same people that squatted and kept open the SF Commune, which was likewise evicted by the SFPD in a huge raid with automatic weapons. I hope these youth will not lose hope. I hope that they will not leave the bay area and leave the struggle, fed up with the police repression and constant attacks.

While degraded in the media as 'outsiders' and often written off by some revolutionaries for being homeless and not up on the latest revolutionary theories, the homeless kids who made up the backbone of the encampment were the foot soldiers that made the space possible. Many were radicalized and politicized during Occupy SF and the wider Occupy movement and have continued to involve themselves in ongoing struggles. Occupy was the most important recent political event because of this; it pulled in many people on the bottom of American society, outcasted, rejected, and from the gutter. This came with warts and all. Many kids I met at Gezi Gardens came from hard lives and the streets, but in Occupy they found a family and a community. They found a commune. The bourgeois media overlooked this and tried to play on middle-class fears, but in doing so they missed out on what was most subversive thing about Occupy. That it created an event that brought so many of us together and united us in a project. One part resistance, one part simply living. In doing so, we came up against the state, it's repression and surveillance and police, as well as it's media, and also the Left, which attempted to channel us back into political parities and non-profits.

According to various people interviewed and internet reports, people gathered close by Gezi Gardens and attempted to march on the space. With police surrounding the entrance, people then tried to get into the garden from the side only to find that another swarm of police were already inside the garden. Marchers then took to the streets, shooting fireworks and blocking traffic. Several arrests occurred. According to the People's Record:

Gezi Gardens organizers & supporters marched around the farm, shutting down two intersections during rush hour. The National Park Service was also called to the space after hummingbird carcasses were found, as well as nesting crows in the eucalyptus trees, so the construction & demolishing has been halted (for now)! An archaeologist has also been called to go into the land to confirm that it is a sacred indigenous burial ground.

While writing this report, I drove by Gezi Gardens, but only saw several police vehicles around the space and the front of Laguna blocked off. Talking with a friend on the phone, I also learned that the plot of land in Albany most recently occupied by Occupy the Farm has recently had a fence placed around it. Likewise, a vacant lot in Richmond that high school youths and Occupy gardeners that was being worked on has likewise had a fence and lock placed around it by police. It's disgusting that in an area torn apart by violence and shootings that when people do come together to plant food and start a garden the land is fenced off by police. This move by the state is the essence of white supremacy and the naked violent nature of the state and the police that serve it. More interested in control and suppression of community power, it is willing to keep people off land that is unused than allow them to take control of one small aspect of their lives. It is fear of black people rising up and it is fear that others will link up with them in this struggle.

At Gezi Gardens, the trees have been cut down and the crops plowed over, but the spirit of the SF Commune remains. For all of us who took part in the occupation of this land for two weeks the experience of living together and fighting together will not dissipate anytime soon. The seed of revolt that has been planted inside so many of us continues to grow. The fight against gentrification and displacement must and will continue. The battle for a new relationship to the land outside of capitalism and against the state will go on. Because quite simply, we have no other choice.
http://baywaters.blogspot.com
Add Your Comments
LATEST COMMENTS ABOUT THIS ARTICLE
Listed below are the latest comments about this post.
These comments are submitted anonymously by website visitors.