Add an Event
Newswire
Calendar
Features
Home
Donate
From the Open-Publishing Calendar
From the Open-Publishing Newswire
Indybay Feature
Publish to Newswire
Add an Event
Related Categories: Santa Cruz Indymedia | Health, Housing & Public Services
Strongly Biased Public Safety Survey
by Brent Adams
Monday Jun 10th, 2013 11:29 AM
The Mayor's Public Safety Task Force has come up with a survey that they'd like you to fill out.
But that survey is loaded with inappropriate, imprecise, unprofessional, and inflammatory
language that enables blame instead of real solutions.
Following the hysterical syringe fear fest that has masqueraded as the Public Safety Committee, Mayor Hilary Bryant has appointed a Public Safety Task force to "go to the root" of problems we're seeing in our community.

The Task Force has come up with a survey that is posted on the City of Santa Cruz's website. Here is the text of that survey:

"The City of Santa Cruz’s Citizen Public Safety Task Force consists of 15 volunteers appointed by the City Council. Task Force members will serve for six months and examine the root causes of local public safety issues. Made up of a diverse cross section of the community, from law enforcement and drug addiction specialists to small business owners and community organizers, this group is working to develop a set of specific policy recommendations for the City Council to guide the City’s response to anti-social and illegal behavior in our parks, open spaces, beaches and neighborhoods.
As part of that process, the Task Force invites your participation in this informal poll. Results of the poll will help to inform the Task Force when developing its priorities and recommendations to the City Council. Please rank your top three concerns with local public safety.


The survey is loaded with inappropriate, imprecise, unprofessional, and inflammatory
language that enables blame instead of real solutions - language such as,
"enabling" and "inappropriate activity".

I encourage you to NOT CHECK ANY of the offered selections but to go straight to the open field at the bottom where you may enter a comment of your own. Please do mention Sanctuary Camp as a proven solution. 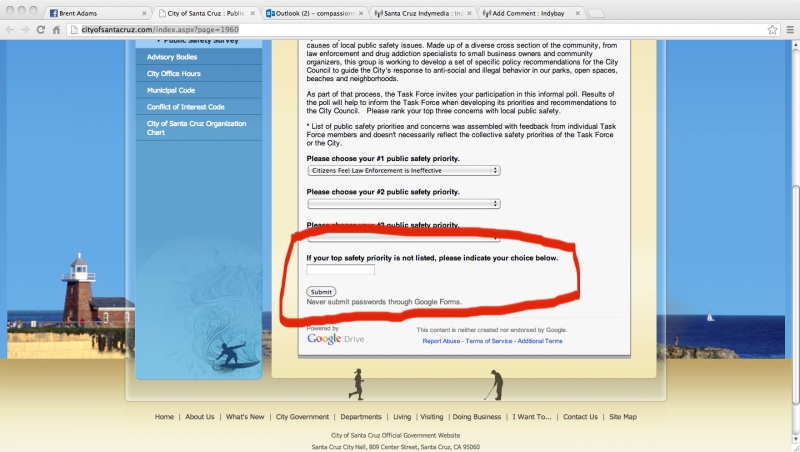 original image (1440x814)
Again, I encourage you to not check any of the boxes but to go straight to the open comment field at the bottom and offer the Task Force a comment. 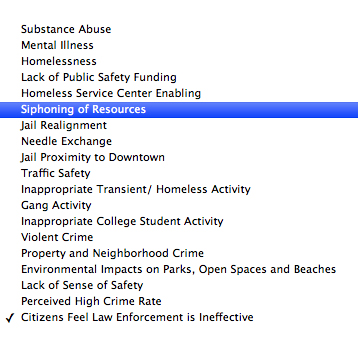 This is the Public Safety Task Force's list of "Safety Priorities"..

http://cityofsantacruz.com/index.aspx?page...
Add Your Comments
LATEST COMMENTS ABOUT THIS ARTICLE
Listed below are the latest comments about this post.
These comments are submitted anonymously by website visitors.