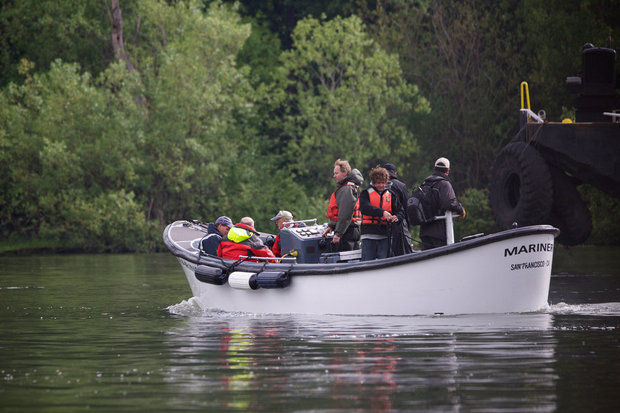 The EGT contract was a chumming for sharks, and now they smell blood. In September 2012, all the other grain handlers demanded similar concessions in a laundry list of non-negotiable demands. That’s when Christmas cargo is peaking, the East Coast dockworkers’ contract of the International Longshoremen’s Association (ILA) had expired and grain elevators were brimming full. It was the time to strike together.
However, ILA President Harold Daggett gave the USMX employers what they wanted, an extension of the contract past Christmas, abandoning the best chance for solidarity between the two longshore unions. After the Christmas holiday, ILWU longshoremen voted to reject the PNGA demands by 94%. But they stood alone now.
ILWU president “Big Bob” McEllrath and Coast Committeeman Sundet got busy with their nationalistic campaign and negotiated a temporary agreement with Cargill/TEMCO containing many of the same giveaways as in the EGT contract. They hailed it as a “win-win” contract and sold it to the membership. But ILWU’s press releases failed to report that the largest grain port on the West Coast, Portland Local 8, voted “no”!
The day after ratification United Grain locked out longshoremen and hired scabs of the Gettier (strikebreaking) Services in February. Columbia Grain followed suit in May. This is the same strikebreaking outfit that was used in ILWU’s Boron lockout in 2010. According to ILWU miners, scabs are still in the Boron mine today!
Portland Leads The Way For ILWU And All Of Labor!
Portland longshoremen voted to hold a rally in a park near Columbia Grain June 1. Seven different union locals in the Portland area voted motions to help build the rally as a show of labor solidarity and power. But the ILWU International officers loudly opposed any such rally. It could lead to an injunction or fines, they argued, and the time to picket is at harvest time. Yet they didn’t do it last year when the time was ripe, and if they wait until next fall to react, the union may not be able to flex its muscle.
Already, these union bureaucrats have had over three months since the lockouts began to organize mass picketing to stop the scabs and haven’t. Meanwhile, there’s simmering anger amongst the rank and file longshoremen. Members of Los Angeles Local 13, the largest local on the Coast with 60% of the longshore membership, came up to Portland for the rally, though it was cancelled, and joined the picket line. Any gain in maritime has been made by the workers themselves taking the bull by the horn and taking care of business. It’s no different today.
The fate of hard-fought union gains and the future of the ILWU is in their hands. It’s either business unionism and defeat, or class-struggle unionism together with all of labor and its supporters. Which road will it be? It’s up to the membership to decide.
Jack Heyman was a seaman in the National Maritime Union and member of the Militant-Solidarity Caucus. In 1980, he joined ILWU, worked on barges and later longshore. Now retired, he chairs the Transport Workers Solidarity Committee. (TWSC) http://www.transportworkers.org and continues to write on labor and politics. This article first appeared on the TWSC website.
http://www.transportworkers.org/node/486
Add Your Comments
LATEST COMMENTS ABOUT THIS ARTICLE
Listed below are the latest comments about this post.
These comments are submitted anonymously by website visitors.