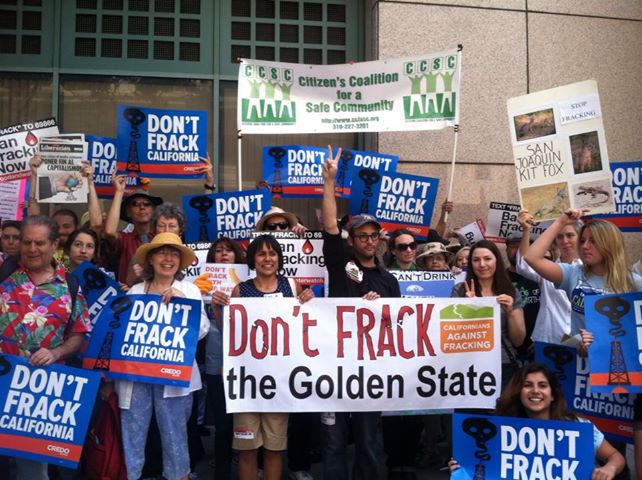 The power of the oil industry in California was demonstrated on Thursday, May 30 when the State Assembly voted 35-24 to kill a bill originally designed to halt fracking throughout the state.

If passed as initially drafted, Assembly Bill 1323, introduced by Holly Mitchell (D-Culver City), would have halted fracking and mandated a review of the risks it poses to the environment and public health.

State legislators first weakened and then voted down this bill, which would have placed a moratorium on the controversial method of oil and gas extraction - even as a new poll shows few Californians support fracking!

"We applaud Assembly Members Richard Bloom, Holly Mitchell and Adrin Nazarian for fighting for a moratorium on fracking in the face of oil industry pressure to put profits ahead of public health," said Brian Nowicki of the Center for Biological Diversity. "Lawmakers haven't passed a fracking moratorium yet, but public opinion is on our side, and a growing number of courageous legislators are determined to fight fracking pollution."

The oil industry claims fracking is environmentally sound and already regulated. In an op-ed in the San Francisco Chronicle on May 12, Reheis-Boyd claimed, “In truth, hydraulic fracturing has been used in California for 60-plus years, is not destructive and has never been linked to any environmental harm here. The process is and has been closely regulated. California's well construction and testing regulations that protect our groundwater are the strictest in the nation." (http://www.sfchronicle.com/opinion/article/Fracking-has-viable-future-in-California-4506267.php)

On the other hand, fracking opponents say hydraulic fracturing is environmentally destructive, since it uses huge volumes of water mixed with sand and dangerous chemicals to blast open rock formations and extract oil and gas, as exposed in the film documentaries Gasland and Gasland II. They note that the controversial technique has been used in hundreds and perhaps thousands of California oil and gas wells, but it's currently unregulated and unmonitored by state officials.

Nowicki said oil companies are gearing up to use "dangerous new techniques" to frack massive deposits of oil in the Monterey Shale, a formation that stretches from Northern California to Los Angeles. These techniques threaten to pollute groundwater supplies and already polluted streams throughout California.

Many fracking opponents believe that Governor Jerry Brown's Bay Delta Conservation Plan (BDCP) to build the peripheral tunnels will be used to provide water to increased fracking operations in Kern County and coastal areas. If built, the tunnels would divert massive quantities of water from the Sacramento-San Joaquin River Delta, the largest estuary on the West Coast of the Americas, to corporate agribusiness and oil companies. The construction of the tunnels is expected to hasten the extinction of Central Valley Chinook salmon, Delta and longfin smelt and other fish species.

Nowick cited a new poll released Wednesday, May 29, by the Public Policy Institute of California that found that fewer than half of Californians – just 39 percent – favor increased use of fracking.

The same poll found that an overwhelming 70 percent of likely voters believe the state government is "pretty much run by a few big interests looking out for themselves" rather than for the benefit of all Californians. These "few big interests" are headed by the Western States Petroleum Association, the largest and most powerful corporate lobby in California.

"Californians' strong concern about fracking is striking given how new this issue is to the state," Nowicki said. "But unless Governor Brown and state legislators take action soon, fracking is going to ramp up dramatically. People in California understand that fracking pollution could dramatically change our state, causing irreparable damage to our air, water and public health."

As the Western States Petroleum Association and oil companies gear up to frack for oil, a new coalition, Californians Against Fracking (http://www.facebook.com/CaliforniansAgainstFracking), launched a massive statewide campaign on May 30 to pressure Governor Jerry Brown to ban fracking in California.

Brown has yet to take a stand for or against fracking, but the governor recently claimed that fracking would be a “fabulous economic opportunity.” He has been very supportive of Big Oil's policies in general, including fast-tracking the Bay Delta Conservation Plan to build the peripheral tunnels in order to deliver massive quantities of Delta water to corporate agribusiness and oil companies in the San Joaquin Valley.

The coalition, including Food and Water Watch, CREDO, the Center for Biological Diversity, Environment California and Democracy for America, held protests that day at Governor Brown’s offices in San Francisco and Los Angeles. Californians Against Fracking is a "new statewide coalition of 100 environmental justice, health, agriculture, and labor organizations working for a statewide fracking ban," according to a joint press release from the groups.

At the protests, hundreds of activists delivered petitions signed by more than 100,000 people urging the governor to ban fracking in California. In Los Angeles, activists were joined by Gasland Part ll Director Josh Fox who helped deliver the petitions to the governor’s office.

"I'm proud to be involved with the launch of Californians Against Fracking and stand next to environmental leaders, advocates and ordinary people fighting to protect the Golden State from the dirty and dangerous processes of fracking and drilling," said Josh Fox, the day after speaking at the premiere of Gasland II to a big crowd at the Crest Theatre in Sacramento.

"I look forward to meeting, educating and being inspired by Californians as I travel across the state with 'Gasland Part II' over the coming weeks. If any state can stand up to the influence that the oil and gas industry wields over our elected officials and government agencies and demand a cleaner, renewable energy future, I have hope California can," he added.

“Californians are waking up to the fact that the industry-touted financial gains that fracking may bring to the state are limited, temporary and primarily for the industry itself, while the damage could be long lasting and potentially irreversible,” said Food & Water Watch Pacific Region Director Kristin Lynch. “No amount of regulation can change the fact that fracking and drilling jeopardizes California’s communities, natural resources and public health, and Californians across the state are speaking out for a ban.”

Background: the increasing power of big oil in California

The drive by the oil industry to frack California is highlighted by recent disturbing developments that reveal the enormous power of Big Oil in the state.

In a classic example of the revolving door between government and huge corporations that defines politics in California now, State Senator Michael Rubio (D-Bakersfield) on February 22 suddenly announced his resignation from office in order to take a “government affairs” position at Chevron.

In a huge scandal largely ignored by the mainstream media, Catherine Reheis-Boyd, the President of the Western States Petroleum Association, not only chaired the Marine Life Protection Act Blue Ribbon Task Force to create so-called “marine protected areas” on the South Coast, but also served on the task forces to create “marine reserves” on the North Coast, North Central Coast and South Coast.

The current push by the oil industry to expand fracking in California, build the Keystone XL Pipeline and eviscerate environmental laws was facilitated by state officials and MLPA Initiative advocates, who greenwashed the key role Reheis-Boyd and the oil industry played in creating marine protected areas that don’t protect the ocean.

Reheis-Boyd apparently used her role as a state marine “protection” official to increase her network of influence in California politics to the point where the Western States Petroleum Association has become the most powerful corporate lobby in California. (http://www.californiaprogressreport.com/site/lawsuit-filed-against-fracking-oil-lobbyist-says-its-safe)

As the oil industry expands its role in California politics and environmental processes, you can bet that they are going to use every avenue they can to get more water for fracking, including taking Delta water through the twin tunnels proposed under the Bay Delta Conservation Plan.

For more information about fracking, go to:
http://www.foodandwaterwatch.org
http://www.biologicaldiversity.org
http://www.cleanwater.org
Add Your Comments
Latest Comments
Listed below are the latest comments about this post.
These comments are submitted anonymously by website visitors.
TITLE
AUTHOR
DATE
Supermajority Democrats Support Fracking
Register Peace & Freedom or Green
Support Independent Media
We are 100% volunteer and depend on your participation to sustain our efforts!