Capitalism and the disaster of hydraulic fracturing ("Fracking") 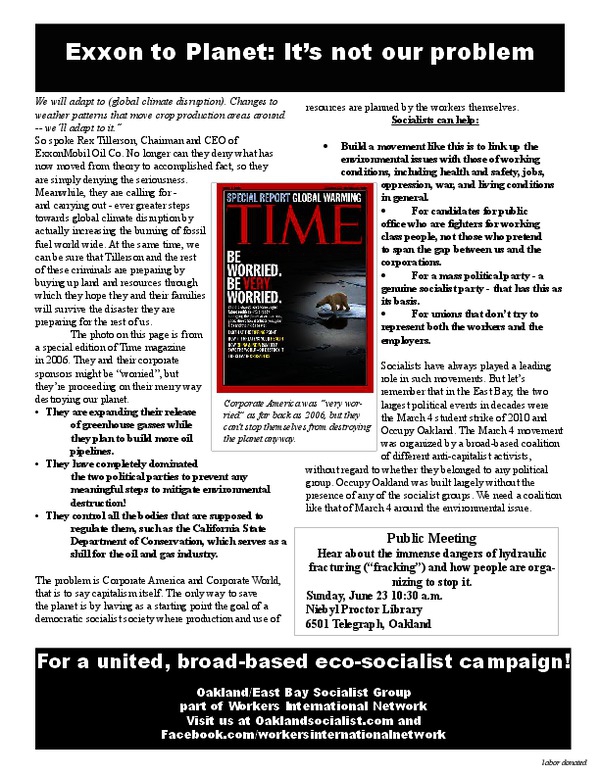 Capitalism and the disaster of hydraulic fracturing ("Fracking")
Flames coming out of the water faucet? Drinking water smelling of chemicals or turned brown? Cancer clusters? Increased birth defects? Air and noise pollution? These are just some of the effects of hydraulic fracturing ("fracking") and horizontal drilling of shale deposits to get at the natural gas or oil these deposits contain. As the easiest to reach oil deposits dry up, fracking is spreading all around the world, and the results threaten to be disastrous. Far from lessening the emissions of greenhouse gas (due to substituting burning of natural gas for coal), it is increasing these emissions. The process of fracking has stirred up communities from Pennsylvania to Colorado, and now it's headed for California in a big way. The presenter, having recently returned from a visit to "fractivists" in Colorado, and having read widely on the issue, will dispel the industry myths on the subject. We will also discuss how this issue and those surrounding it are a direct manifestation of the crisis of capitalism itself as well as discussing how socialists can involve themselves in the environmental movement. John Reimann will speak and lead our discussion of this important topic.
For those wishing to do a little research in advance, here is an article on fracking written by the speaker: http://oaklandsocialist.com/2013/05/20/us-energy-independence-and-hydraulic-fracturing/
Also, this online video by the extremely thoughtful scientist Theo Colborn is very worthwhile watching:
http://www.endocrinedisruption.org/chemicals.video.php

About the Institute
The Institute for the Critical Study of Society at the Niebyl Proctor Marxist Library (ICSS-NPML) was formed to further the Library's goals of preserving our written heritage, as well as supporting emerging struggles for racial and gender equality, and for Socialism. The members of ICSS are active in different aspects of people’s struggles in the Bay Area and globally. Some are affiliated with specific political parties and tendencies, others are not. We respect one another, but we do not necessarily agree on all issues. Accordingly, the opinions expressed in our lectures, workshops, and publications are those of the authors only and do not represent a group consensus on the issues discussed. We are united, however, in our respect for the work of Karl Marx and our belief that his work will remain as important for the class struggles of the future as they have been for the past. As a group, we continue to draw inspiration from the work of Karl Marx, including his Eleventh Thesis on Feuerbach: “The philosophers have only interpreted the world, in various ways; the point is to change it.”
END_OF_DOCUMENT_TOKEN_TO_BE_REPLACED
Added to the calendar on Mon, Jun 3, 2013 10:22AM
Add Your Comments
Support Independent Media
We are 100% volunteer and depend on your participation to sustain our efforts!