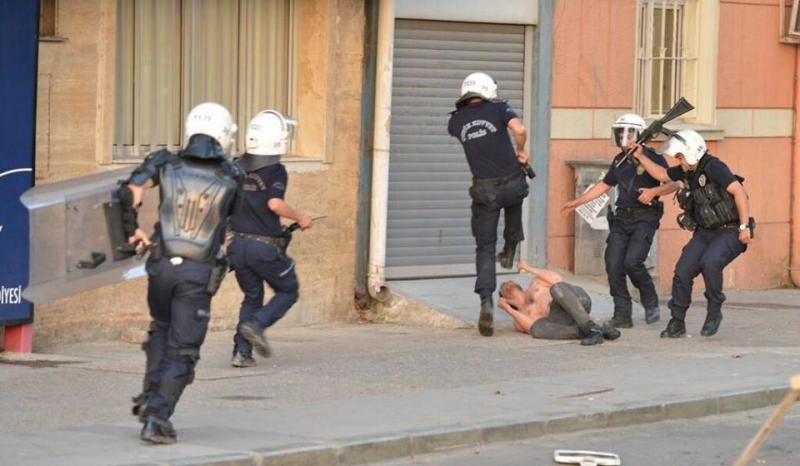 On Saturday night, June 2nd, the Turkish police continued their brutal repression. People in the streets of Turkey have reported to this author that last night the police killed five people in Antayla and many more were murdered in Adana and Istanbul. This is on top of 27-30 people murdered by the Turkish police Friday night. I have seen photographic evidence of some of these murders. Here is video the Turkish police driving into a crowd in a police truck called a “troma” and murdering people:

Despite 5 million people taking to the streets on Friday and murderous police violence against the people, on Saturday the headline in Sabah, one of Turkey’s main capitalist newspapers was on Prime Minister Erdogan’s campaign to get people to quit smoking.

The New York Times, instead of reporting the facts, reports police violence as perception or criticism. For instance, in their article this morning (Sunday) without mentioning a single death they say:

“The departure of the police, who had been widely criticized for violent tactics on Friday, set off scenes of jubilation and destruction, as some drank and partied while others destroyed police vehicles and bulldozers.”

This is typical of the imperialist corporate media where the destruction of police vehicles and bulldozers gets priority over the lives of human beings.

Likewise, the corporate media has remained silent for decades as the Turkish government has violated every basic human right of the Kurdish people and, in a war against Kurdish communities, slaughtered 30,000 people.

There is a reason for the silence of the international capitalist media on the crimes of the Turkish state. It is the fact that the government of Turkey is one that prioritizes capitalist profit over human needs. This allows the capitalists who run the powerful imperialist countries of Europe and the United States to profit from its resources and labor unhindered in any meaningful way by the demands of the Turkish people for the rights of labor and the environment. Those who do make such demands face the cruelty of the Turkish national police. In addition, the international capitalist press stays silent on the crimes of the Turkish state also because the Turkish government, for the most part, plays along with the geo-strategic interests of U.S. and European imperialism.

So when the New York Times promises “all of the news that’s fit to print”, it should be clear that they are talking about censoring the most troublesome information for their system.

My friends in Turkey don’t want more people to die. Around the world we should do what we can for them by spreading information blacked out in the corporate media, because sometimes if the oppressors in power know they're being watched, it helps. Ultimately though, it will take a proletarian revolution to stop the brutality of this evil system, both in Turkey and in the imperialist centers of the United States and Europe.

The uprising in Turkey has some of the ingredients needed for proletarian revolution. Brave and rebellious people have taken to the street and have even driven the cops out of certain areas. And that rebellion has even driven cracks into the capitalist state itself, shown by the fact that there have been soldiers of the Turkish military who are siding with the protesters against the police. This has included soldiers handing out gas masks to protesters to use in their battles with the police.

A key question, however, is always the question of leadership. A revolutionary proletarian party is always needed to drive any revolutionary uprising forward to the seizure of proletarian power. Where such a leadership is lacking, the repressive capitalist state remains and there is no actual revolution, despite great sacrifice, as was the case in Egypt. If any organization in Turkey today fits the bill of what is needed, or if a new organization needs to be built, such a discussion would go beyond the scope of this article which needs to be distributed immediately. I will say, however, that every protester in the streets of Turkey should be taking this question seriously. For the awake, leadership should never just be left to someone else. Everyone in the streets should be developing their own abilities and knowledge to cultivate themselves as leaders, whether or not they decide to use those abilities to build existing organizations or in building something new. Revolution is built on an awakening of consciousness that sees the only road to liberation flowing from smashing the capitalist state, overthrowing the capitalist system of exploitation, ending nationalist oppression and standing up for all of the most oppressed, and establishing a system of workers democracy. Whatever the immediate outcome of the current uprising, the organization and building a revolutionary proletarian party that fights to carry out these objectives will be critical.

End U.S. Imperialist Attacks on Liberated Syrian Kurdistan! (This article actually goes into detail about the Kurdish question in Turkey, Syria, Iraq, Iran, and the USSR and former USSR)
http://www.indybay.org/newsitems/2013/03/03/18733059.php

U.S. Backed Genocide of Christians, Alawites, and other Minorities in Syria (The Turkish government is a key player in backing the genocidal Islamist war in Syria, and demands of ending Turkish aid to the Islamic extremists of the FSA have been a component of the current uprising.)
http://www.indybay.org/newsitems/2013/05/30/18737666.php 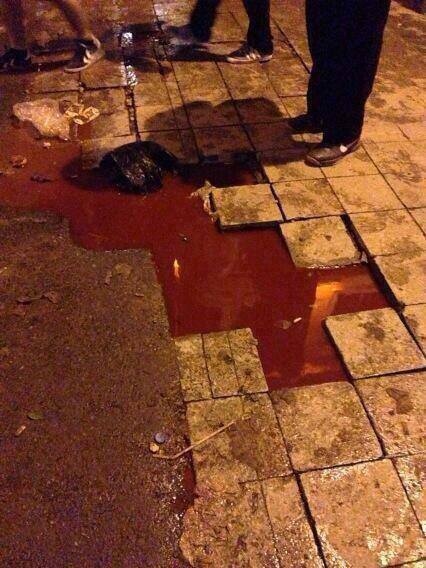 Taksim, Istanbul
Add Your Comments
Comments (Hide Comments)
§Aljazeera as Bad As New York Times
by Steven Argue
Aljazeera, like the New York Times and the rest of the capitalist media also fails to mention the extent of the violence discussed in my article. Here is part of their coverage this morning, without mention of a single murder by the police:

"Interior Minister Muammer Guler said more than 1,700 people had been detained in protests that have spread to 67 cities, though most have since been released.

""A large majority of the detainees were released after being questioned and identified," he said in remarks carried by the state-run Anatolia news agency.

"Erdogan has admitted there may have been some cases of "extreme" police action.

""It is true that there have been some mistakes, extremism in police response," he said."
Add a Comment
§CNN: Another Example of Terrible Coverage in the Corporate Media
by Steven Argue
Here is some more terrible coverage from the capitalist media. Pure lies completely reliant on government reports. They report that there have been no deaths. This is a blatant lie that they admit comes from the government as do all of their casualty and arrest numbers. It is the duty of journalists to investigate these things. This is like how the New York Times has reported atrocities carried out by the U.S. backed Free Syria Army, directly printing the lies of the FSA that blame the Syrian government for FSA crimes. In Turkey, the corporate media directly reports the lies of the U.S. backed Turkish government as it carries out crimes against its people.

In addition, the number of cities they report protesting is half of actual numbers reported elsewhere as 67 cities this morning. Again, CNN admit they get their information from the government.

They also suggest there is a contradiction between Kurdish parties and secular protesters. This is absurd. One of the main Kurdish parties, the PKK, is fully secular, far more secular than the ruling government.

CNN Report
https://www.facebook.com/photo.php?v=10151438794482742
Add a Comment
§Additional deaths in Akura
by Steven Argue
I am hearing additional reports on the ground in Turkey that the police have murdered 4 people and injured 400 in Ankura.
Add a Comment
§The blackout on news coverage of Erdogan's police murdering Turks in the street
by Cynthia Allaire (CLALLAIRE [at] yahoo.com)
On the day of Bradley Manning's trial where the case against him centers on his "arrogance" in thinking he should let people know about the bloody crimes of empire, the corporate news here chose to ignore that tear gas canisters were being used like bullets to the heads of peaceful protesters in Turkey, as was done in Oakland California. Stomping and beating protesters was seeming to be a sports activity for the police, like they are on a soccer team and the protesters' heads are the balls.

What was it that so angered the power base in the US over Bradley Manning's release of documents and the video "Collateral Murder"? Unbelievably, NPR interviewed a Bush appointee regarding this who tried to dispute that the killers heard in the video were gleeful with their production of carnage. Both the US troops in Iraq and Erdogan's police in Istanbul demonstrated their perverse pleasure in inflicting pain and death and it is recorded. The elites don't feel these actions are crimes, but that making others aware of these actions is the crime.

It was reported that internet with Twitter and Facebook were throttled in the period when a reported 10,000 Turks were streaming across the Bosphorus bridge. Amazingly, I heard some declare this was a "fringe" group that was angry with Erdogan. At the same time the police were withdrawn, apparently the throttling of the internet ceased. I also saw reports that Erdogan and his two sons are billionaires with multiple Swiss bank accounts, and their was consideration that the original impetus for this protest, the destruction of the last major park within Istanbul to be replaced with a shopping mall was a project that would personally profit Erdogan who is still hell bent on pursuing this despite the fracture it has caused in the country he presides over. Maybe not for long.

From Wikileaks released diplomatic cables, denounced by Erdogan as "slander": "A 2004 dated cable by then-U.S. ambassador Eric Edelman said: "We have heard from two contacts that Erdogan has eight accounts in Swiss banks; his explanations that his wealth comes from the wedding presents guests gave his son and that a Turkish businessman is paying the educational expenses of all four Erdogan children in the U.S. purely altruistically are lame."

Erdogan has denied he has any money in Swiss bank accounts and threatened to file a lawsuit over the charges.

The diplomatic messages at times show concerns that European Union candidate Turkey is shifting its allegiances from the West and Israel toward Iran and other Muslim countries since Erdogan took office in 2002.

Edelman's cables also portray Erdogan as an authoritarian, distrustful leader of his ruling AK Party and say that he believes God appointed him to lead Turkey.

The AK Party traces its roots to a banned Islamist movement, but denies its a religious grouping. It is gearing up for a general election planned for June, in which Erdogan is seeking a third term."
http://www.reuters.com/article/2010/12/05/us-turkey-wikileaks-idUSTRE6B407420101205

http://www.youtube.com/watch?v=ZKUXSZVvHGU In the description of this video is a listing of some of the corrupt actions of Erdogan and his party, that includes his son purchasing a cargo container for $2.5 million. Profiting immensely on food items is another area of corruption with price manipulation. This would serve to hurt the majority of Turks and increase deprivation to the working class.
Add a Comment
§YouTube Removed the Video of the Murders
by Steven Argue
Oh, I see You tube removed the video of the Turkish police brutally murdering people with the troma. More censorship from the capitalist owned media.
Add a Comment
§YouTube Of Police Squashing Woman
by Steven Argue
YouTube has removed far more brutal video of a whole crowd of protesters being run over at extremely high speed by a Turkish police truck Friday night. That incident caused many casualties and is likely a big part of protester’s estimates of 27-30 people being murdered by the police that night. Here, however, is video of a woman being run over by a similar truck. This is probably the account I've heard of Aylin, 25, being squashed by a toma.

http://www.youtube.com/watch?v=FvEdT4fWSR4
Add a Comment
Support Independent Media
We are 100% volunteer and depend on your participation to sustain our efforts!