Add an Event
Newswire
Calendar
Features
Home
Donate
From the Open-Publishing Calendar
From the Open-Publishing Newswire
Indybay Feature
Publish to Newswire
Add an Event
Related Categories: International | Santa Cruz Indymedia | Environment & Forest Defense | Global Justice & Anti-Capitalism | Police State & Prisons
Despite Brutal Crackdown, Uprising in Turkey Continues
by Steven Argue
Saturday Jun 1st, 2013 5:59 AM
The demonstrations began a few days ago against plans to turn a loved and historic city park into a shopping mall. The struggle is now much bigger than that. 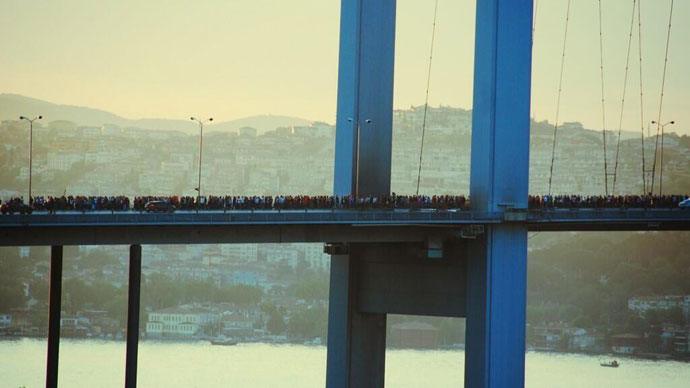 Photo: Tens of thousands of people crossing the Bosphorus Bridge this morning to get to Istanbul's Taskim Square, starting another day of protests that are engulfing Turkey. Protesters have been attacked once again this morning already with police tear gas and water cannons. There are reports in the corporate media of a woman being killed in last night's clashes and of an elected Kurdish MP being brutally assaulted by police along with many others. True casualties appear to be much higher, estimated by protesters at 27-30 people dead.

An estimated 5 million people took to the streets last night.

The demonstrations began a few days ago against plans to turn a loved and historic city park into a shopping mall. Police of Prime Minister Recep Tayyip Erdogan brutally attacked the peaceful protesters. Protests have also erupted this month in opposition to Erdogan's military backing of the genocidal Islamists of the Free Syria Army fighting in Syria as well as his crackdowns on political freedom and moves by Erdogan's semi-Islamist government to limit alcohol sales and to outlaw signs of affection in public.

Turkish Kurds in the Kurdistan Workers Party (PKK) also issued a warning that the current cease fire with Turkey's violently anti-Kurdish government may be suspended if the government violates its agreements. The Turkish government has long kept the Kurdish language illegal and banned it in the schools. The Turkish government has only recently somewhat lifted some of those restrictions, but in very limited and unsatisfactory ways. Kurdish political organization has also long been banned and, with U.S. military assistance, Kurdish communities have been the target of brutal warfare that has killed 30,000 people.

Yesterday (Friday), there were Turkish soldiers who sided with protesters against the police and handed out gas masks. Today, protesters in Ankura have already been hit with tear gas and water cannons. Prime Minister Erdogan is still vowing to go ahead and rip up trees to create a mall. Protesters are now saying that the struggle is much bigger than just saving the trees. Their chants in the street are against fascism and for the ouster of Erdogan's brutal government.

The Revolutionary Tendency condemns the repression of the Erdogan government and advocates the overthrow of Turkey's brutal capitalist and pro-imperialist government in a proletarian revolution that smashes the capitalist state, abolishes capitalist exploitation, and works to establish a federation of socialist republics of the Middle East that include Kurdish, Turkish, and Arab speaking republics that guarantee the language and other rights currently denied the oppressed Kurdish people. Essential in that struggle to smash the capitalist state will be splitting the rank and file of the military from the military brass and the police. Photos last night of the military handing out gas masks to be used in the struggle against the police is a hopeful sign.

Why The Russian Revolution is Still Important
http://www.indybay.org/newsitems/2012/03/03/18708611.php
Add Your Comments
LATEST COMMENTS ABOUT THIS ARTICLE
Listed below are the latest comments about this post.
These comments are submitted anonymously by website visitors.