“Let’s make it clear Jerry – you tried to cram the canal down the throats of Californians and you lost,” said Garamendi. “The tunnel project will destroy the largest estuary on the west coast of the Americas and not deliver one new single gallon of new water.”

Photo of John Garamendi speaking at the podium at the press conference on the Sacramento River opposing Governor Brown's peripheral tunnel plan. 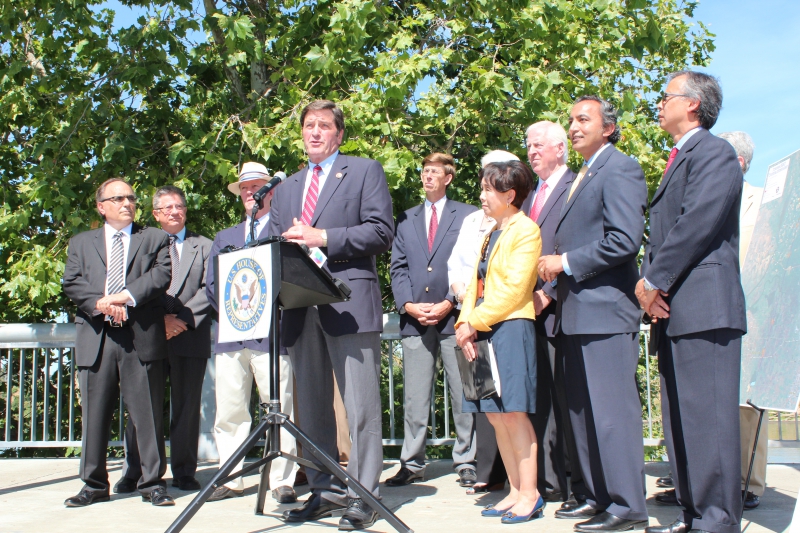 On the banks of the Sacramento River less than a mile from the State Capitol on May 30, five Members of Congress from the Sacramento-San Joaquin River Delta region blasted the current Bay Delta Conservation Plan (BDCP) to build the peripheral tunnels and the lack of input afforded their constituents at a press conference.

As the Representatives spoke, adult spring run Chinook salmon and American shad, fish whose very existence is threatened by the peripheral tunnels, migrated up the system to their spawning grounds. Meanwhile, juvenile fall run Chinook salmon, including 3 million released into the river by the Nimbus Fish Hatchery in May, made their way downriver to the ocean.

The press conference took place a day after Chapters 8-12 of the Bay Delta Conservation Plan’s administrative draft, which include the financing mechanism, were released. The documents estimate the total costs of the project to be $24.5 billion during its 50-year implementation, while opponents of the project, including noted economists, say the total cost could be well over $50 billion.

Rep. Doris Matsui began the press conference by introducing the speakers and tracing the history of the BDCP, along with discussing her background as the daughter of a Sacramento area fruit farmer.

BDCP is a disaster for northern California

“For more than six years the BDCP has ploughed its way ahead led by a very small group of individuals, none of whom represent northern California,” she stated. “Our constituents and stakeholders in the Bay-Delta region have been shut out of the process.”

Matsui said the plan will provide her constituents in Sacramento County with no benefits while the 10 years of construction of the project, 24 hours a day, will take “an enormous toll” on the economy of the County.

She emphasized the massive scale of the project, noting that the intake facilities on the water treatment plan at Freeport currently take 300 cfs, while the proposed BDCP intakes will have the capacity to divert 9,000 cfs and possibly more, nearly the entire flow of the Sacramento River, 12,000 cfs, through downtown Sacramento as she spoke.

“To find a long-term solution all of the stakeholders, not just the beneficiaries of the project, must have a seat at the decision-making table. We can and we must do better for California. Unfortunately, the current BDCP falls far short,” she stated.

Rep. Mike Thompson said the BDCP is “a good deal for the South of Delta contractors. If you care about the Delta, it is an absolutely bad deal.”

He drew a comparison on what is happening in the BDCP process and the fishery disaster that took place on the Klamath River in 2002.

“You can’t take an unlimited amount of water and grant it to the most powerful group in the area. The Bush administration did just that on the Klamath River in 2002 and 80,000 salmon died as a result,” said Thompson.

“The proposed BDCP is not a workable solution,” said Thompson. “It puts the interests of South-of-Delta water contractors ahead of the Delta’s and North-of-Delta’s farmers, fishers and small business owners. Livelihoods are at stake.”

“Until we have a plan that is transparent, based on sound science and developed with all stake-holders at the table, then any process that moves us closer to building these tunnels will recklessly risk billions of California tax dollars and thousands of jobs. Let’s take the time to get this right,” he stated.

“Let’s make it clear Jerry – you tried to cram the canal down the throats of Californians and you lost,” said Garamendi. “The tunnel project will destroy the largest estuary on the west coast of the Americas and not deliver one new single gallon of new water."

Garamendi outlined his strategy, an alternative plan to the BDCP, that “would add to our water supply through conservation, recycling, storage, and improvements to our levees while respecting water rights and using the best science.”

Garamendi said his alternative would take advantage of water conservation to produce an additional 2 to 4 million-acre feet of water. It would also take advantage of the fifth largest virtual river in the state – recyled water from sanitation plants in Southern California.

He also recommended increased water storage in aquifers in both northern and southern California, as well as at off stream sites, such as Sites Reservoir.

Rather than the proposed peripheral tunnels, he suggested studying a smaller facility.

“The California water system is under enormous stress from a growing population and climate change,” said Garamendi. “The proposed peripheral tunnel plan fails to deliver a real solution for this fundamental problem. The tunnels would deliver massive amounts of water from Northern to Southern California, destroying the Sacramento Delta in the process.”

Garamendi added, “Instead of wreaking havoc on the Delta region with a massive, expensive plumbing system, we need a cost-effective, comprehensive water plan. It’s time for a midstream correction to the BDCP: let’s bring everyone to the table and develop a plan that meets the needs of all Californians.”

In a similar vein, Rep. Jerry McNerney said, "The Governor recently released additional information on his deeply-flawed plan for the Delta region, which further proves he is intent on forcing this plan forward without any regard for the farmers, families and small business owners who rely upon a healthy Delta for their livelihoods, or for the incredible environmental damage that will result.

“As it stands, the plan will cost billions of dollars, devastate the most valuable water resource we have in California, and ultimately create no new water. There is a better way forward, and it must include the input of the people who stand to lose the most if the Delta is destroyed,” he concluded.

Rep. Ami Bera (CA-7), a recreational salmon angler who reported good fishing last season as the fishery recovered from the collapse of 2008-2009, said, “Let’s slow down the process and look at all of the alternatives. There is no reason to go ahead with a multi-billion dollar project that pits one community against another.”

“All of us here understand that water is critical in our state and that there needs to be a bay delta solution that does not put south-of-delta water contractors ahead of everyone in or north-of-delta,” he stated. “ It’s vital for our health, our environment, and our wallets that we have a comprehensive, long-term plan for securing water access and storage that’s based on sound science.

“The livelihoods of our local farmers, anglers, and small business owners are at stake, and the potential risk to jobs and billions of California tax dollars is too big to ignore. Continuing with this plan, without getting input from all stakeholders, and without considering other alternatives is a bad idea for Sacramento County families,” said Bera.

Rep. George Miller (CA-11), the co-author of the Central Valley Project Improvement Act of 1992 that mandated the doubling of naturally spawning Central Valley salmon and other anadromous fish populations by 2002, wasn’t able to attend the conference, but released a statement criticizing the Governor’s tunnel plan.

“Governor Brown and his administration officials have failed to demonstrate that they are taking into account the real physical and financial harm that can come to Bay-Delta communities if a BDCP plan is pushed through without the proper cost benefit analysis of alternatives, an adequate finance plan, or without acknowledging the best available science—science that has pointed to the real possibility that this plan could overtax our water resources and devastate the Bay-Delta region,” he said.

“Without doing so the BDCP is further than ever from a sustainable policy. It is time to seriously reevaluate this plan to ensure it fulfills the co-equal goals that it is mandated to adhere to, and takes into consideration the concerns of the businesses, families and communities that rely on a viable, healthy Bay-Delta region for their livelihoods,” Miller said.

Jane Wagner-Tyack, policy analyst for Restore the Delta, commented about the event, “It’s interesting that the Representatives focused so closely on the money. They clearly understand that the cost-benefit analysis for the project is greatly inadequate. It was very reassuring.”

Ron Stork, senior water policy analyst at Friends of the River quipped, “It would be good to see the Metropolitan Water District to become a friend of the river. I’m not sure they’re there yet.”

While Northern California Representatives are strongly opposed to the current BDCP process, thirteen California members of the U.S. Congress from Southern California and the southern San Joaquin Valley on May 22 sent a letter to U.S. Secretary of the Interior Sally Jewell and Governor Brown expressing “continued strong support” for the Bay Delta Conservation Plan, adding “we cannot go in with half measures."

To read the letter, go to: http://baydeltaconservationplan.com/Libraries/Dynamic_Document_Library/5-22-13_Congressional_letter_of_support_for_BDCP.sflb.ashx