National Day of Action on Social Security, Medicare, and Medicaid 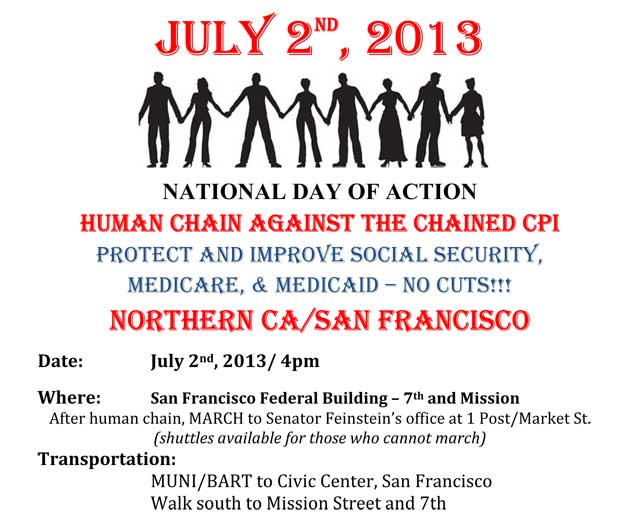 Human Chains to Break the Chained-CPI.
A National Day of Action to Protect and Improve
Social Security, Medicare, and Medicaid.

We will form a human chain around the Federal Building, and then will march to Senator Feinstein’s office on Market and Post Streets. (Shuttles provided for those in need.)

Our most precious and popular social programs – Social Security, Medicare, and Medicaid are under attack – and not just by the far right. President Obama, along with Democratic leaders, are proposing huge changes – from the Chained CPI (which is a cut, changing the way the COLA is calculated), to increases in Medicare premiums, rate reductions for Medicare and Medicaid providers, and even raising the beneficiary age for Medicare and Social Security. THESE CUTS MUST BE STOPPED. Actions across the country will involve making human chains to break the chained CPI and other cuts to our essential programs.

This National Day of Action on Social Security, Medicare, and Medicaid is initiated by the Alliance for Retired Americans and the AFL-CIO and will be joined by hundreds of groups around the country.

The next planning meeting for the SF event is Friday, June 21, 10 AM, at the Dorothy Day Community Center, 54 McAllister, SF. (Near 7th/Market, Civic Center BART/MUNI, map at http://tinyurl.com/c8ehjaf . Please come and represent your group.

Added to the calendar on Thu, May 30, 2013 9:24AM
Add Your Comments
Support Independent Media
We are 100% volunteer and depend on your participation to sustain our efforts!