“From the food that California farmers grow today to the long-term future of our state’s water resources and air, California’s economy and vital resources hang in the balance if we allow fracking to continue in California,” stated Lynch. 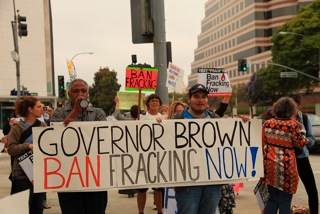 Fracking opponents fear that increased water diversions destined for the peripheral tunnels proposed under the Bay Delta Conservation Plan (BDCP) will be used for expanding fracking in Monterey Shale deposits in the San Joaquin Valley and coastal areas. The construction of the tunnels is expected to hasten the extinction of Central Valley Chinook salmon, Delta smelt and other fish species.

The three bills were referred to the Appropriations Committee suspense file on May 15. (http://leginfo.legislature.ca.gov/faces/billNavClient.xhtml)

"We are extremely optimistic that these bills will keep moving forward," said Kassie Seigel of the Center for Biological Diversity. "They can do so as one year or as two year bills. We're doing everything we can to push them forward and we'll know more on the status of the legislation at the end of this month."

Richard Bloom’s A.B. 1301, Holly Mitchell’s A.B. 1323 and Adrin Nazarian’s A.B. 649 would place a moratorium on fracking while threats posed by the controversial practice to California’s environment and public health are studied, according to a news release from Food and Water Watch.

The Appropriations Committee is deciding on these three bills and four other fracking-related bills by Friday, May 24. You can contact your legislator by going to: http://org.salsalabs.com/o/2155/p/dia/action3/common/public/index.sjs?action_KEY=13490

In an op-ed in the San Francisco Chronicle on May 12, Reheis-Boyd disputed claims by environmental and consumer groups that fracking in California is “destructive and unregulated.”

“In truth, hydraulic fracturing has been used in California for 60-plus years, is not destructive and has never been linked to any environmental harm here. The process is and has been closely regulated. California's well construction and testing regulations that protect our groundwater are the strictest in the nation,” she wrote. (http://www.sfchronicle.com/opinion/article/Fracking-has-viable-future-in-California-4506267.php)

"Fracking operations have skyrocketed throughout the country and in California as new technologies have enabled the extraction of oil and natural gas deposits from previously unreachable geological formations," said Bloom. "However, fracking uses and produces highly toxic chemicals that can pose serious threats to public health and the environment." (http://asmdc.org/members/a50/news-room/e-newsletters/legislative-update)

"The threat is significant enough that 14 states have now enacted legislation restricting or banning the practice until safeguards are in place. Currently, California does not regulate or monitor fracking despite holding the largest oil reserve in the continental United States, the Monterey Shale," he explained.

“Oil and gas wells have been fracked in at least nine California counties without fracking-specific regulation or even monitoring by state oil and gas officials,” according to Food and Water Watch. “Fracking, also known as hydraulic fracturing, employs huge volumes of water mixed with sand and toxic chemicals — including known carcinogens — to blast open rock formations and release previously inaccessible fossil fuels.”

Kristin Lynch, Pacific region director for Food & Water Watch, said the Natural Resources Committee “sided with the people of California” when it voted to advance legislation that places a moratorium on fracking.

“From the food that California farmers grow today to the long-term future of our state’s water resources and air, California’s economy and vital resources hang in the balance if we allow fracking to continue in California,” stated Lynch.

“This is a huge win for Californians threatened by fracking pollution,” said Kassie Siegel. “These bills will protect the air we breathe and the water we drink from cancer-causing chemicals and other fracking pollutants. That’s why a fracking moratorium is supported by nurses, farmers and so many others concerned about our state’s health and environment.”

Siegel said fracking is linked to air and water pollution and releases large amounts of methane, a dangerously potent greenhouse gas. About 25 percent of fracking chemicals could cause cancer, according to scientists with the Endocrine Disruption Exchange.

“This vote is an important step in the effort to protect California from the dangers of fracking,” said Grinberg. “This committee gets it that the state needs to slow down and assess the many threats to our air, water, climate and communities of extreme oil extraction.”

Grinberg said fracking pollutes the air by releasing dangerous petroleum hydrocarbons, including benzene, toluene and xylene. It can also increase levels of ground-level ozone, a key risk factor for asthma and other respiratory illness.

According to a Colorado School of Public Health study, air pollution caused by fracking contributes to the risk of asthma, cancer, and other health problems in people living near fracked wells, A.B. 649, A.B. 1301 and A.B. 1323 will next go to the Assembly Appropriations Committee.

The huge volume of water used and contaminated by fracking is a critical issue for California, especially when Governor Jerry Brown is rushing the construction of the peripheral tunnels to export water from the Sacramento-San Joaquin Delta to corporate agribusiness and oil companies.

Lynch cited a new report from the Western Organization of Resource Councils that estimates that fracking consumes about 7 billion gallons of water in four western states where fracking has become widespread.

The report, titled “Gone for Good,” warns that water consumption by the oil and gas industry “simply cannot be sustained.”

The current amount of water used for fracking in California is not currently known. In a post on the Bay Delta Conservation Plan (BDCP) website on March 210, Richard Stapler, Deputy Secretary for Communications of the California Natural Resources Agency, claimed that only 8 acre feet of water is used every year for hydraulic fracturing in California, in an apparent attempt to minimize the amount of water employed for fracking. (http://baydeltaconservationplan.com/blog/blog/13-03-20/Oil_Water.aspx_)

Yet in a footnote at the bottom, Stapler states, "For reference, you could multiply the average of 87,375 gallons with every injection well in the state (about 25,000) and still come up with a relatively small amount of water -- 6,721 acre feet, or water for about 27,000 average families for a year."

Stapler never responded to my email inquiry over the enormous discrepancy in the water he claims is used for fracking per year– 8 acre feet of water in one section of his article and 6,721 acre feet in another.

One thing is for certain - oil companies use big quantities in their current oil drilling operations in Kern County, although the amount specifically used in fracking operations is hard to pinpoint. Much of this water this comes through the State Water Project's California Aqueduct and the Central Valley Water Project's Delta-Mendota Canal, spurring increasing conflicts between local farmers and oil companies over available water. (http://yubanet.com/california/Dan-Bacher-Water-for-fracking-8-acre-feet-6-721-acre-feet-or-much-much-more.php)

"In the time since steamflooding was pioneered here in the fields of Kern County in the 1960s, oil companies statewide have pumped roughly 2.8 trillion gallons of fresh water—or, in the parlance of agriculture, nearly 9 million acre-feet—underground in pursuit of the region's tarry oil," according to Jeremy Miller's 2011 investigative piece, "The Colonization of Kern County," in Orion Magazine. "Essentially, enough water has been injected into the oil fields here over the last forty years to create a lake one foot deep covering more than thirteen thousand square miles—nearly twice the surface area of Lake Ontario." (http://www.orionmagazine.org/index.php/articles/article/6047)

Background: the increasing power of big oil in California

In a big scandal largely ignored by the mainstream media, Catherine Reheis-Boyd, the President of the Western States Petroleum Association, not only chaired the Marine Life Protection Act Blue Ribbon Task Force to create so-called “marine protected areas” on the South Coast, but also served on the task forces to create “marine reserves” on the North Coast, North Central Coast and South Coast.

The current push by the oil industry to expand fracking in California, build the Keystone XL Pipeline and eviscerate environmental laws was facilitated by state officials and MLPA Initiative advocates, who greenwashed the key role Reheis-Boyd and the oil industry played in creating marine protected areas that don’t protect the ocean.

Reheis-Boyd apparently used her role as a state marine “protection” official to increase her network of influence in California politics to the point where the Western States Petroleum Association has become the most powerful corporate lobby in California. (http://www.californiaprogressreport.com/site/lawsuit-filed-against-fracking-oil-lobbyist-says-its-safe)

As the oil industry expands its role in California politics and environmental processes, you can bet that they are going to use every avenue they can to get more water for fracking, including taking Delta water through the twin tunnels proposed under the Bay Delta Conservation Plan.