Illustration by Finley Coyl
http://www.sexworkerfest.com/
§from Dance Against Violence
by Carol Leigh Thursday May 16th, 2013 3:34 PM 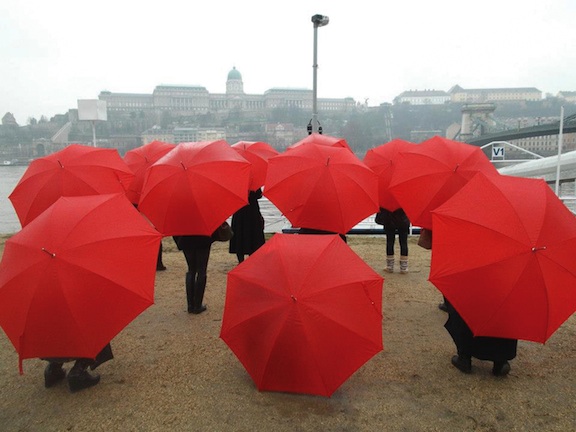 The San Francisco Sex Worker Film and Arts Festival has screened close to 300 movies, challenged stereotypes, resurrected archetypes and provided a forum for the accomplishments of sex worker performers, artists and filmmakers from San Francisco and around the world. The Festival runs from May 18th-26th at various locations.

“The many films that deal with prostitution reflect a culture’s unease and obsession with sexuality. They are the realization of the fantasies that surround the act of exchanging money for sex.”
--Encyclopedia of Prostitution and Sex Work

An affirmation of this community’s strength and creativity, the Festival highlights work such as “Global Sex Workers on the March!” the latest from the extensive body of videos by Asia Pacific Network of Sex Workers (http://www.blip.tv/sexworkerspresent). Michael Kasino’s “Pay It No Mind’” memorializes co-founder of Street Transvestite Action Revolutionaries (S.T.A.R.). Marsha P. Johnson, activist, sex worker and Stonewall instigator, who “threw the shot glass heard around the world.”

While recognizing the courage of these artists and activists, much of work addresses repression, stigma and violence. In Kristen DiAngelo’s “American Courtesans,” many of the women featured relate a past of family or professional victimization, and pull the viewer through the trauma and catharsis stories to bear witness to eventual claiming of spaces of radical empowerment as whores, writes festival curator, Laure McElroy. “American Courtesans” debuted at Women International Film & Arts Festival and is heralded as a passionate film as well as a game-changing tool for therapists to “educate our community about sex and sex work in order to abate and abolish the misunderstandings and violence against sex workers.” (Natalie Mills, LMFT) (http://www.indybay.org/newsitems/2013/05/16/18736911.php)

Victims, survivors, workers, Alex Perlman’s "Lot Lizard" does not take any easy ways out by simplifying the stories of the featured or making them pithy. “A brilliant and moving documentary, Lot Lizard looks closely at figures in the shadows of the nighttime truck lots, and allows the participants in this hidden economy to speak for themselves,” writes Southern Methodist University Film Professor Kevin Heffernan, “...over the course of the film, we come to see them in their fully complex humanity and as participants in an equally complex and interlocking economy of which we all are a part.” (http://www.indybay.org/newsitems/2013/05/16/18736915.php)

When it gets too tough, these artists revert to satire ala former stripper Gina Golds’ hilarious “Stripper Damage,” (http://www.youtube.com/watch?v=cpwG4u_ofjY) as well as Festival favorites “Whore Logic” with The incredible Edible Akynos by PJ Starr and “Last Rescue in Siam” by EMPower in Thailand. (http://www.youtube.com/watch?v=70rPAxLFFKU)
Other highlights include events and performances such as Oral Services (a spoken word event) with Amber Dawn, Brontez Purnell, Laure McElroy, Juba Kalamka, Rhiannon Argo, Ckiara Rose, Lola Sunshine, Jacques La Femme, editors of Dear Dawn and Doug Upp.

Activist and educational highlights include “Anti-Trafficking and The Carceral State” with Emi Koyama; “Privilege, Oppression and InterseXionality,” an innovative four day social justice training for sex workers and allies; and “The Institute of Sexworkology with classes with Lambda Award winning author Amber Dawn, Alice in Bondage Land, The Incredible Edible Akynos and Mission SRO Collaborative exploring “how Housing Justice can be used as a powerful framework for building solidarity with street-based sex workers.”

On Friday, May 24th Mariko Passion presents the “Whorrific Cabaret and Popcorn Theatre Bus Tour,” a long running San Francisco tradition, encouraging audience participation, costumes and performances at mystery locations around San Francisco. “This sex worker 'show and tell' edition visits the haunts and landmarks of SF whoredom (like City Hall) where sex workers dish the dirt about what really goes on in ‘the city that knows how.’ ”

The culmination of the festival is back by popular demand, Whores’ Bath, a day of pampering and “magical healing” by and for sex workers as newly defined in the Urban Dictionary. (http://www.urbandictionary.com/define.php?term=whores%20bath)

Sex work had never lacked for social stigma. The names pinned on us, like the images and ideas of us in the scholarly and popular media, are rarely created by us and our opinions are not sought. But we know who we are, we will TELL YOU who we are: whores of color making our money and flashing our titties in a sea of stereotypes; females-to-males-to-females-to pro/dommes; punk-rock trans*brats; drug addicts who do not deign to repent using OR whoring; workaday prostitutes out there in the lot trying to function under a police state that criminalizes our livelihoods and shames the lives that we have, sometimes out of necessity of poverty and sometimes out of a vocation to provide pleasure...
--Laure McElroy, Film Curator

The San Francisco Sex Worker Film and Arts Festival will be presented at locations in San Francisco and the Bay Area including the Roxie Theater, the Center for Sex & Culture, Faithful Fools, Hospitality House, the St. James Infirmary and CAL-PEP. from May 18th-26th. Co-directors/producers: Carol Leigh & Erica Fabulous; Sponsors include The San Francisco Bay Guardian, Media Alliance, Good Vibrations, Vixen Creations, the Sisters of Perpetual Indulgence, Inc., Rainbow Grocery and many more. (http://www.sexworkerfest.com/swfestprograml.pdf)

http://www.sexworkerfest.com/
§The Incredible Edible Akynos
by Carol Leigh Saturday May 18th, 2013 9:57 AM 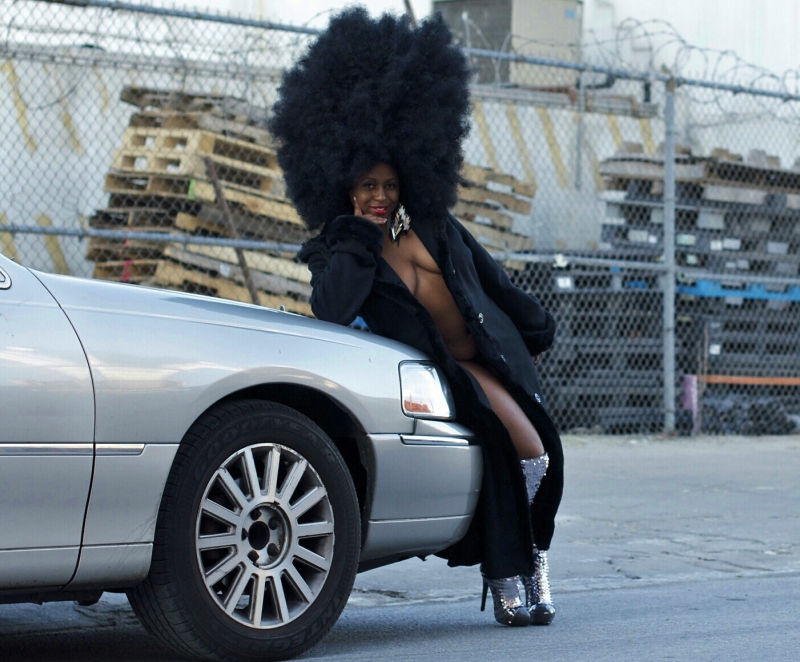 original image (1401x1160)
The Incredible Edible Akynos appears throughout the week, on May 24th at the Institute for Sexworkology and at Mariko Passion's Whorrific Popcorn Theatre Bus and Cabaret; on May 25th in Whore Logic by PJ Starr at 10:30 PM at the Roxie.
http://www.sexworkerfest.com/
§Mariko Passio in personna as Ana May Tong
by Carol Leigh Saturday May 18th, 2013 9:57 AM 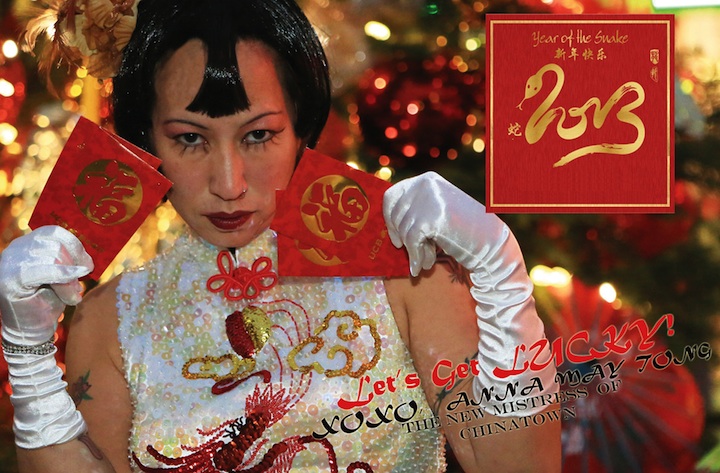 More about Ana May Tong by Mariko Passion

Anna May Tong is a character inspired by the Chinese American actress Anna May Wong, but with a Chinese Tong gangstress edge. The Tongs were notorious for running gambling and prostitution houses in San Francisco and other parts of the U.S in the 1800s and were the feared power in charge of trafficking Chinese girls into sex slavery during that time in history. Many Chinese girls paid off their debts and married Chinese men who were former railroad workers opening Chinese laundries or went on to continue life in the sex trade as independent and voluntary sex workers. Anna May Wong spoke Chinese but did not have an accent and was born in Los Angeles. She was known for playing stereotypical Asian characters in Hollywood in the 1920-30s such as the villainess, the prostitute (Shanghai Express with Marlene Deitrich) or girl who does not get the guy (because he is white and anti-misegenation was iLLEGAL til the 1960s). As an actress, she earned respect by film studios like Paramount. She was a trailblazer in Hollywood, enjoying a life of privilege beyond the imaginations of most Asian-Americans at the time and is one of the few American born Asians that has a star on the Hollywood walk of fame. 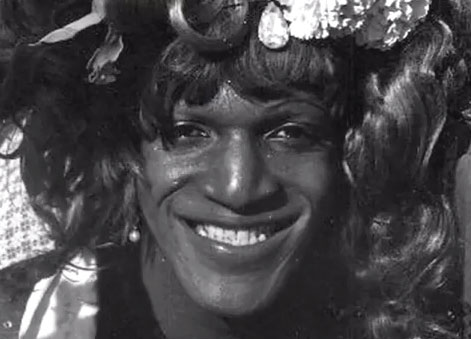 “All of us are created equal-- is the star that guides us still; just as it guided our forebears through Seneca Falls, and Selma, and Stonewall...”

As President Obama followed that star of justice in his 2013 inauguration speech, so we continue on that path. Our festival proudly presents “Pay it no Mind:The Life and Times of Marsha P. Johnson,” memorializing Marsha, Stonewall instigator, the woman who threw "the shot glass that was heard around the world"
http://www.sexworkerfest.com/
Add Your Comments
Support Independent Media
We are 100% volunteer and depend on your participation to sustain our efforts!