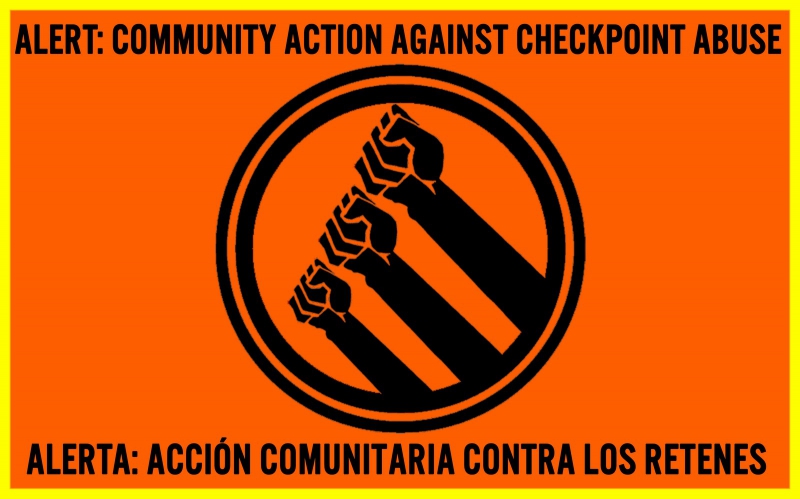 STATEMENT OF POSITION: Our Community Can Challenge and Resist Police Checkpoint Abuse
http://todopoderalpueblo.org/2011/07/16/statement-of-position-our-community-can-challenge-and-resist-police-checkpoint-abuse/

A random checkpoint (also known as a "flying checkpoint", "mobile checkpoint" or "hasty checkpoint") is a military and police tactic involving the setup of a hasty roadblock primarily by mobile truck-mounted infantry or police units in order to disrupt unauthorized or unwanted movement and/or military activity.

The Santa Cruz Police Department is hosting a driving under the influence sobriety checkpoint from 11 p.m. to 3 a.m. Saturday on the Ocean Street corridor.

Officers will be contacting drivers passing through the checkpoint for signs of alcohol and/or drug impairment. Drivers caught driving impaired can expect possible arrest, license suspension and insurance increases, as well as fines, fees, DUI classes and other expenses that can exceed $10,000.

The primary purpose of a DUI checkpoint is to increase awareness, deter impaired driving and to arrest those drivers who are found to be under the influence, according to the Santa Cruz Police Department.

The Santa Cruz Police Department urges the community to report DUI drivers by calling 911.
END_OF_DOCUMENT_TOKEN_TO_BE_REPLACED
Added to the calendar on Thu, May 16, 2013 10:17AM
Add Your Comments
Support Independent Media
We are 100% volunteer and depend on your participation to sustain our efforts!