Add an Event
Newswire
Calendar
Features
Home
Donate
From the Open-Publishing Calendar
From the Open-Publishing Newswire
Indybay Feature
Publish to Newswire
Add an Event
Related Categories: California | Central Valley | Environment & Forest Defense | Government & Elections
Bay-Delta salmon population just one fifth of mandated goal
by Dan Bacher
Wednesday May 15th, 2013 8:24 AM
“After two closed salmon fishing seasons in 2008 and 2009, and a token season in 2010, fishermen are fishing again, but we remain far below the abundant runs required by law,” said Zeke Grader, executive director of Pacific Coast Federation of Fishermen’s Association and GGSA board member. “Stronger Delta pumping restrictions are paying off but we have to finish the job and get these salmon runs rebuilt.”

Photo of commercial salmon fishing boat outside of the Golden Gate by Dan Bacher. 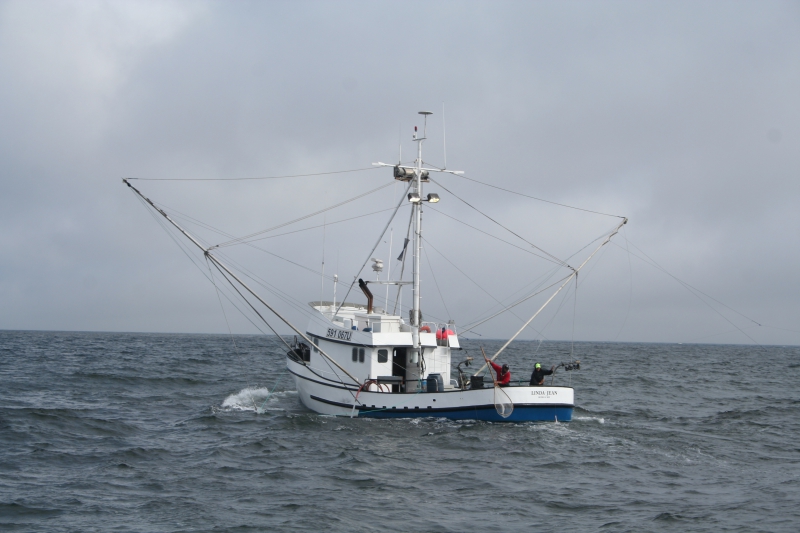 As Governor Jerry Brown continues to push for the construction of the peripheral tunnels under the Bay Delta Conservation Plan (BDCP) a new analysis released on May 13 by the Golden Gate Salmon Association (GGSA) and the Natural Resources Defense Council (NRDC) reveals that the salmon fishery is limping along at only 20 percent of the population goal required by state and federal law.

The landmark Central Valley Project Improvement Act (CVPIA), passed by Congress in 1992 under political pressure from a big coalition of recreational anglers, commercial fishermen and environmentalists, set a goal of rebuilding salmon runs to almost a million adult fish by 2002. It also mandated the doubling of other naturally spawning anadromous fish populations including green sturgeon, white sturgeon, Central Valley steelhead, striped bass and American shad by 2002.

For the first time, the CVPIA made fish and wildlife a purpose of the federal Central Valley Project. Unfortunately, the state and federal governments have failed to enforce the CVPIA and other laws mandating the restoration of Central Valley salmon and other anadromous species - fish that migrate from the ocean to spawn in the Sacramento and San Joaquin rivers and their tributaries.

"More than a decade past the law’s deadline, the salmon fishery continues to struggle due, in large part, to excessive pumping of fresh water from the Bay-Delta that deprives salmon of the cold, flowing rivers and healthy habitat they need to thrive," according to a joint release from GGSA and NRDC.

“After two closed salmon fishing seasons in 2008 and 2009, and a token season in 2010, fishermen are fishing again, but we remain far below the abundant runs required by law,” said Zeke Grader, executive director of Pacific Coast Federation of Fishermen’s Association and GGSA board member. “Stronger Delta pumping restrictions are paying off but we have to finish the job and get these salmon runs rebuilt.”

The groups say these results are only "marginally better" than the 12 percent of salmon produced in 2011, when NRDC and GGSA released the first analysis of the Central Valley Chinook salmon population goals.

The CPVIA specifically directs the U.S. Department of the Interior to protect, restore, and enhance fish in the Central Valley of California. That means rebuilding salmon populations from 495,000 to 990,000 wild adult fish by 2002, according to Grader.

“This year our industry will only get a fraction of what our state and federal governments are supposed to be producing," said John McManus, executive director of GGSA. “We’re having a hard time living on 22 percent of the legally required salmon population. Balance could be restored by reallocating a fairly small amount of water which would give us healthy salmon runs, healthy local food, healthy communities and a healthy economy.”

Central Valley Chinook salmon declined drastically from 2003 through 2010, reaching a record low of 7 percent of the required population level, according to McManus. This decline in the fishery corresponded with a 20 percent increase in water diversions from salmon habitat over levels from the preceding quarter century. The largest water exports from the Delta in California history took place from 2003 to 2006 and in 2011.

Although the Central Valley salmon numbers have increased since the unprecedented collapse of 2008-2009, forecasts suggest 2013’s salmon returns will again fall far below what the law requires.

Kate Poole, Senior Attorney with NRDC, said, “Many large agribusinesses in California will get 100 percent of their contract water supplies this year, despite the low snowpack and lack of rain. California’s struggling salmon population and the fishing industry will not be so lucky. The Interior Department and the State are providing fishermen only 22 percent of their promised yield. It’s possible to get salmon back on track, but federal and state agencies need to dramatically step-up restoration efforts in order to achieve it.”

Recommendations
State and federal agencies can step-up their efforts to restore salmon by acting on the following recommendations:
• The Department of the Interior should reform Central Valley Project water contracts and revamp its salmon rebuilding efforts in response to a scathing independent review. Specifically, Interior should better manage water and restoration funds dedicated to salmon recovery, incorporate the latest scientific information and appoint a manager to be accountable for the progress of the restoration program.
• The State Water Resources Control Board should set stronger standards to protect salmon in the San Joaquin River and the Bay-Delta ecosystem, in proceedings to revise these standards that are currently underway.
• The California Department of Water Resources should incorporate salmon doubling into the Bay Delta Conservation Plan process.
• The California Department of Fish and Wildlife should launch an ambitious state salmon restoration effort.
• The U.S. Department of the Interior should aggressively implement NRDC’s agreement to restore the salmon run on the San Joaquin River.

Meanwhile, the Brown and Obama administrations on May 8 set a formal deadline of October 1 for the release of the draft Bay Delta Conservation Plan to build the peripheral tunnels and accompanying environmental documents for public review and comment. The construction of the 35 mile long twin tunnels under the Delta could hasten the extinction of Central Valley chinook salmon, Delta smelt and other fish species, according to state, federal and independent scientists.