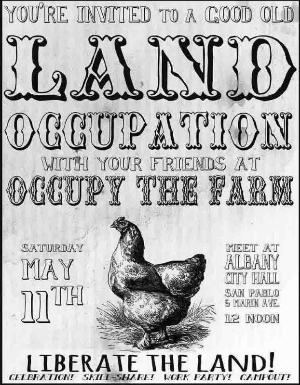 It was about this time last year that UC’s development project, slated to pave over much of the historic Gill Tract Farm, was brought to the forefront of public debate by our three-week land occupation.  The momentum continued into the summer with a campaign of direct action farming and guerilla food distribution, numerous public forums and speakouts in favor of the farm, a local referendum and two lawsuits against the UC’s plan.

All of this hard work helped establish a broad based coalition of grassroots groups, and it also secured two huge victories: control of the northern half of the Gill Tract was transferred from UC’s Capital Projects back to the UC College of Natural Resources, and the anchor tenant on the southern half of the Farm, Whole Foods, pulled out of the UC’s development project entirely.

We are encouraged to see the north side of the Farm under the administration of the College of Natural Resources (CNR), even if the reprieve from development is temporary (the UC’s arrangement is only for 10 years).  We have begun work with fellow urban farmers and allies on campus to engage in meaningful dialogue around what a community partnership with the UC could look like.  This diverse group of stakeholders recognizes the Farm as an icon of the structural challenges facing communities all over the world, as they struggle for land access and food justice.  OTF is committed to maintaining these positive, collaborative relationships, even as we call for another direct action on May 11th.

Our call to action is spurred by UC Capital Projects’ recent unveiling of a renewed development plan for the Farm, which aims to replace Whole Foods with a smaller grocery store called Sprouts. At first glance that might sound like a win for farm supporters, but a closer look shows that the new development will have the same footprint as the old ones, with a large parking lot that would blanket most of the south side of the farm.

It is inspiring to see Albany residents rally to protect the Farm, joining a larger community that is not restricted to geographic proximity.  Every resident of California is a stakeholder in the UC: it is up to us to ensure that the UC’s stewardship of the Gill Tract does not sacrifice our interests in public land and public education in favor of corporate interests and a quick profit.  Each of you receiving this email, no matter where you are in the world, is a critical constituent in the battle for an Urban Farm at the Gill Tract, and it in turn reflects and magnifies the struggles of every other community that is fighting for the highest and best use of our planet’s food system and natural resources.

The southern portion of the Gill Tract Farm that is under threat has not been cultivated for years, but the soil remains some of the most fertile in the bioregion.  Fed by the rising and receding cycle of the two creeks that have run through the land for millennia, and subject to comparatively little development or contamination since World War II, the remaining portion of the Farm is irreplaceable in its capacity to build local resiliency through the cultivation of food, knowledge, and community.

On Saturday, May 11th, we will launch an action that manifests the highest and best use of the Gill Tract farmland!

Be prepared to farm and occupy!

Can you help? RSVP to occupythefarmrsvp@gmail.com if you can:

END_OF_DOCUMENT_TOKEN_TO_BE_REPLACED
Added to the calendar on Fri, May 10, 2013 11:48AM
§Occupy the Farm to Plant on Gill Tract
by Occupy the Farm 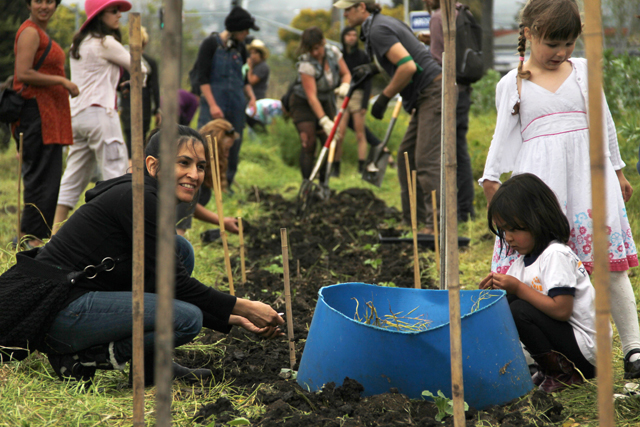 On May 11th, farmers, students, and local residents will peacefully march onto the Gill Tract and re-establish a public urban farm, challenging the UC’s renewed plans for private, commercial development of this public agricultural resource.

Last year, Occupy the Farm hosted a three-week occupation of the Gill Tract, creating an urban farm that produced several tons of organic produce that the group distributed for free at pop-up farmstands in Albany, Oakland and Richmond. As a result of this direct farming action, control of the northern half of the Gill Tract was transferred from UC’s Capital Projects back to the UC College of Natural Resources, at least for 10 years.

However, last week the University announced that it had found a new developer to pave over the Gill Tract and build another chain grocery store on the site. This was announced despite fifteen years of resistance from Albany residents and East Bay community members, including a successful grassroots voter referendum in Albany, two lawsuits, and numerous direct action campaigns and public protests. With nearly two-thirds of those present speaking against the proposed development at Wednesday’s Planning and Zoning Commission public hearing, local opposition to the development is still strong.

“This is really about highest and best use of the land,” says local elder Sally Sommer. “40 years ago, when my daughter was a preschooler in Albany, the Gill Tract was a working farm and we'd often visit together. I would love to do that again.”

As land administered by a publicly-funded institution with a mandate for public education, it is in the public’s interest for this land to be returned to that highest and best use as a source of local food production and agricultural education. Occupy the Farm envisions a future in which East Bay communities make use of all available land - occupying it when necessary - to create urban agriculture alternatives and meet local needs in the face of economic and environmental crisis. The long term goal on the Gill Tract is to establish a productive and democratically-run urban farm, with open access and participation by the larger East Bay community, and to preserve this rich natural resource in perpetuity.

“As the last large piece of ag land left in the East Bay, the Gill Tract is a crucial piece of the vision for food sovereignty in this area,” says Lesley Haddock, current UC Berkeley student. “The south side of this historic farmland is part of the whole, and also irreplaceable.”

Since last April, Occupy the Farm has continued to work with fellow urban farmers, community organizations and allies on campus to engage in meaningful dialogue around what a community partnership with the UC could look like. This diverse group of stakeholders recognizes the Farm as an icon of the structural challenges facing communities all over the world, as they struggle for land access and food justice. Occupy the Farm is committed to maintaining these positive, collaborative relationships, even as they call for another direct action on May 11th.


What: Occupy the Farm -- Spring into Action
When: Saturday, May 11th at 12 p.m.
Where: Albany City Hall - corner of San Pablo and Marin

###
END_OF_DOCUMENT_TOKEN_TO_BE_REPLACED
Add Your Comments
Support Independent Media
We are 100% volunteer and depend on your participation to sustain our efforts!