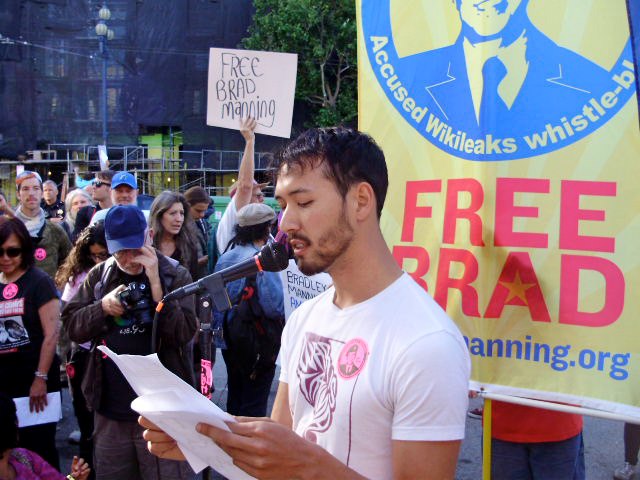 The beginnings of San Francisco’s gay liberation movement were deeply tied up with mass mobilizations against the Vietnam war, alongside thousands of GI resisters, like B. Manning. Iraq Veterans Against the War San Francisco is disappointed that the board of SF Pride has betrayed the strong anti-war roots of San Francisco’s LGBT community by deciding to unseat B. Manning as 2013 grand marshall, and to further publicly malign Manning.

SF Pride has broken with its own tradition of appointing controversial community leaders and freedom fighters as grand marshalls, and has instead capitulated to the interests of its funders and lowest common denominator politics by making the profoundly undemocratic decision to reverse Manning’s election. SF Pride’s recent statement also makes several false assertions about the nature and effects of Manning’s actions.

As veterans of the Iraq and Afghanistan wars (both queers and allies), we strongly object to the hyberbolic assertion made by Lisa Williams, president of SF Pride’s Board of Directors, that Manning’s election as grand marshall is an “insult to every one, gay and straight, who has ever served in the military of this country,” or that Manning committed “actions which placed in harms way the lives of our men and women in uniform.”

Indeed, US servicemembers are placed in harm’s way--not by whistleblowers and human rights defenders--but by the policies carried out by the Bush and Obama administrations in Iraq and Afghanistan, and by the broken veteran care system we return to. As veterans, we have witnessed the effects of U.S. occupations on civilian populations in Iraq and Afghanistan. As violence racks communities throughout Iraq this month, we note with sadness that today’s Iraq is less safe for gay men--as well as women of all sexual orientations--than it was a decade ago when the U.S. invaded.

Like us, Manning saw the effects of years of U.S. occupation in Iraq. PFC Manning has been homophobically maligned by the mainstream press as having impulsively leaked documents in an attempt to “get back at” the Army following relentless homophobic harassment. In fact, Manning’s statements reveal an extremely sophisticated analysis of military racism and the U.S. military’s role in undermining democracy in Iraq and around the globe. If Manning is guilty of releasing wires to Wikileaks, then Manning is guilty of actions that have played a role in catalyzing some of the largest democratic uprisings in recent history. Meanwhile, these “crimes” pale in comparison to the laundry list of unethical and illegal activities perpetrated by a number of SF Pride’s funders, including Wells Fargo, Bank of America, and AT&T.

B. Manning is currently languishing in a military prison in conditions that the UN and Amnesty International have described as torturous. After nearly three years, Manning is facing a trial without basic tenets of due process. B. Manning has risked a great deal on account of the belief that information mattered--that we, as a public, would do something if we knew the truth about actions being taken by the U.S. government. Now, it is up to us to prove Manning right.

Publicly maligning Manning one month before what could be the biggest court martial proceeding our country has ever seen has broad negative implications for the future of truth-telling from within the military ranks, and accordingly for the US population to be informed on the actions of our nation.

We would like to respectfully call on members of the wider LGBT community to demand Bradley Manning’s reinstatement as a 2013 SF Pride Grand Marshall [info [at] sfpride.org], to take this time to renew commitments to anti-war politics and solidarity with political prisoners, and to visibly support B. Manning throughout the ensuing court martial, as well as the upcoming Pride season.

San Francisco Chapter of
Iraq Veterans Against the War and
Civilian-Soldier Alliance
END_OF_DOCUMENT_TOKEN_TO_BE_REPLACED
Related Categories: San Francisco | Anti-War | LGBTI / Queer
Add Your Comments
Latest Comments
Listed below are the latest comments about this post.
These comments are submitted anonymously by website visitors.
TITLE
AUTHOR
DATE
There will be a Bradley Manning contingent
Stephen
L,G,B,T, Bradley Manning [leaks] for me!
Stephen Funk
What government giveth...
Dan Waterhouse, Newslink
re: Manning is a terribly diversive figure
certainly
A bigger issue: no TG people on staff or Board
a TG person
Where is Bradley Manning Contingent in Parade for Us to Join?
Support Bradley Manning
Not a valid canidate
PS
No to Bradley Manning
Dan Waterhouse, Newslink, Fresno
Support Independent Media
We are 100% volunteer and depend on your participation to sustain our efforts!