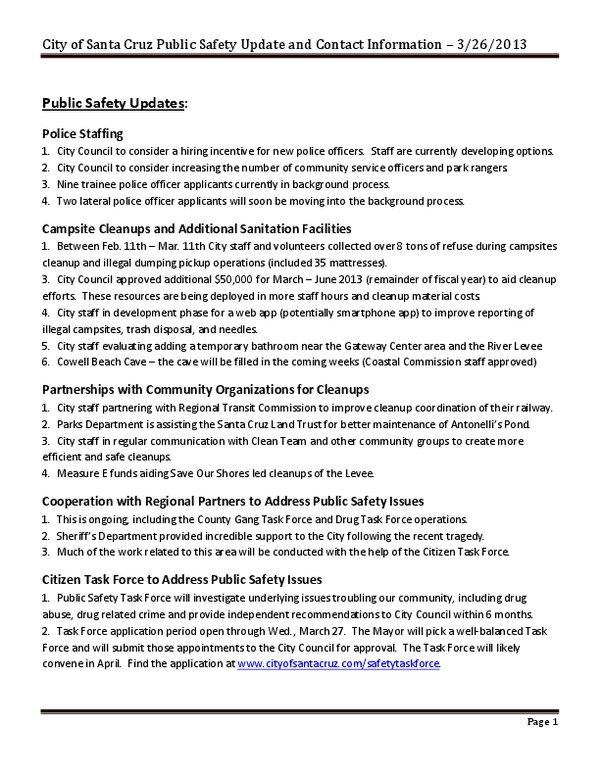 Download PDF (125.1KB)
According to the City's website and posting, the Terrazas-Mathews-Comstock Police Job Enablement Committee (if you'll pardon the truth-in-advertising substitution) meets the day after the Homelessness "Study" Session.

The third item on its agenda is Progress Report of the City Council’s Safety Action Plan, as adopted on February 12 2013 Presentation from City Manager’s Office Staff.

Public Comment on real Public Safety issues "not on the agenda" is, of course, at the end of the meeting, which some will not have the patience or endurance to sit through.

I have repeatedly requested this meeting be audioed at least for those who can't attend it, since it usually creates reports that then get largely rubber-stamped by City Council, in spite of public input. Terrazas had declined to do so without explanation, a sunny smile on his face with the assurance that "he'll consider it for a future meeting". Bring your own audio (or video) equipment to be sure.

The meeting may be held in City Council chambers or in the conference room behind it.

Real Public Safety issues for homeless people such as police violence and vigilante attacks, of course, are not on this committee's agenda (and have never been to my knowledge). Nor is there any move to reopen accessible Needle Exchange in the City, nor set up Sharps Containers nor public bathrooms.

It looks like needle distribution and Public PooPoo will continue in the nighttime hours. But then, that'll give Take Back Santa Cruz, the Clean Team, the SCPD and Councilmembers Robinson and Comstock something to mount a bogus political campaign around--won't it?
§Flyer & Mini-Update
by Robert Norse Tuesday Apr 30th, 2013 9:14 PM 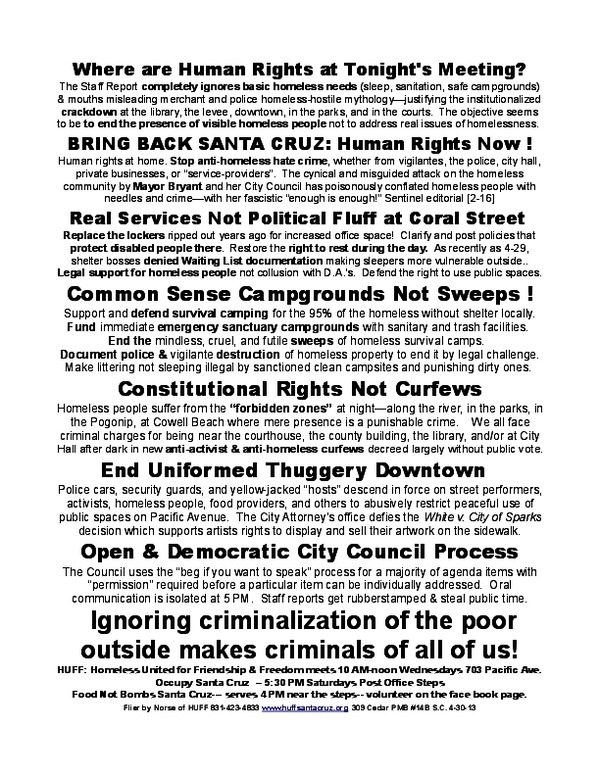 Download PDF (74.8KB)
City Council chambers were packed. Jumbogumbo Joe Schultz showed up with cistern of kale soup as well as home-made baklava and special garlic pizza. I passed out some flyers to most friendly or neutral folks with about 20 rebuffing the flyers, some with hostile comments. Councilmember Terrazas assured me the proceedings were being televised. He also noted tomorrow's Public Safety Committee meeting at 6 PM would be audio taped.

The first hour was taken up with Assistant City Manager Tina giving an endless- llne-by-line reading of the staff report. I asked, but the Council apparently declined to turn out the outdoor speakers so the few outside the packed chambers could hear the proceedings. There were no signs among the audience members.

I had to leave early to take home a weary woman who'd undergone dental surgery earlier in the day. Having handed out half a hundred flyers, I called it a night.

Thanks to Joe Schultz for the tasty food.

If I nerve myself up to view the video (assuming it was televised), I'll pass on my comments.

I'm including a flyer that I made but was unable to download because my printer went down and Fed-Ex Kinko's would not take the format.
Add Your Comments
LATEST COMMENTS ABOUT THIS ARTICLE
Listed below are the latest comments about this post.
These comments are submitted anonymously by website visitors.