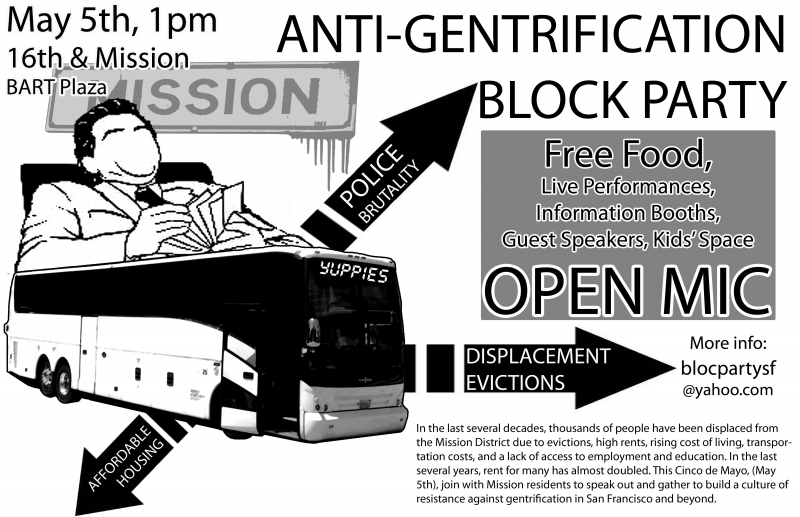 In the last several decades, thousands of people have been displaced from the Mission District due to evictions, high rents, rising cost of living, transportation costs, and a lack of access to employment and education. In the last several years, rent for many has almost doubled. This Cinco de Mayo, (May 5th), join with Mission residents to speak out and gather to build a culture of resistance against gentrification in San Francisco and beyond.

Rally Support for In the Works Facing Eviction!

Our friends at ITW (intheworkssf.wordpress.com) are currently facing eviction from their building, after a new landlord, Rick Holman, has purchased the property. As they stated recently, “Rick Holman, a previous Bank of America executive, and his wife, Toby Levy, are long time gentry…Rick is a financier and businessman and Toby owns Levy Design Partners, an architectural firm. Rick finds, finances, buys, then evicts, and Toby comes in to design the new street level commercial and 2nd and above level condominiums.” They went on to state in another statement: “Rick Holman is currently collecting soil samples from 60 feet under the building, indicating that he is interested in building a parking garage for a new condo development. We cannot allow another block in the Mission to be gentrified.” Please come out to the block party to rally support for ITW and let them know they are not alone as they begin their fight to save their home.

Add yourself to the facebook event!:
http://www.facebook.com/events/165110990318440/
Added to the calendar on Thu, Apr 25, 2013 9:35PM
Add Your Comments
Latest Comments
Listed below are the latest comments about this post.
These comments are submitted anonymously by website visitors.
TITLE
AUTHOR
DATE
After Party! Punk Show!
Bay Area Antifa
Support Independent Media
We are 100% volunteer and depend on your participation to sustain our efforts!