Add an Event
Newswire
Calendar
Features
Home
Donate
From the Open-Publishing Calendar
From the Open-Publishing Newswire
Indybay Feature
Publish to Newswire
Add an Event
Related Categories: U.S. | Animal Liberation
Bat World Sanctuary loses USDA permit. Animal Welfare Act violations found.
by Animal Welfare Act
Wednesday Apr 24th, 2013 2:30 PM
A USDA veterinarian reviewed video of Amanda Lollar of Bat World Sanctuary trying to perform surgery on a bat. Ms. Lollar is not a veterinarian and has not gone past the ninth grade. The USDA veterinarian stated "This mother bat clearly experienced pain and suffering at Ms. Lollar's hand, so much so that it appeared to lose consciousness during the procedure." "I believe the mother bat could have survived if it had been properly anesthetized and the pup delivered using proper surgical techniques." Mom and pup died at the hands of Amanda Lollar. 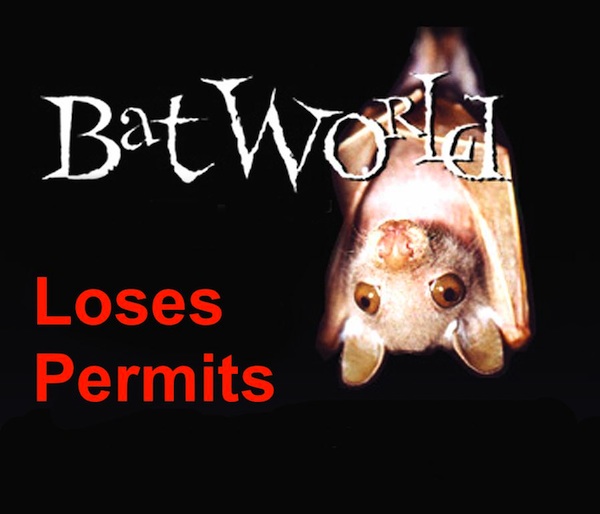 From the communication, "I have reviewed the U-Tube footage and looked at the complaint about the bat that was mishandled by Ms. Amanda Lollar of the Bat World Sanctuary. This is indeed a violation of the AWA (Animal Welfare Act). Ms. Lollar should have sought veterinary assistance for the bat with the dystocia. It would be one thing if she were only assisting a birth, but the moment Ms. Lollar realized this was a dystocia requiring an episiotomy, she should have taken the bat to her attending vet or a local veterinarian. Apologizing in the video to the bat does not solve the problem. This mother bat clearly experienced pain and suffering at Ms. Lollar's hand, so much so t hat it appeared to lose consciousness during the procedure No anesthesia was given to the bat and no pain management was offered. I believe the mother bat could have survived if it had been properly anesthetized and the pup delivered using proper surgical techniques. It is possible the pup could also have survived if this case had been properly managed by a veterinarian." This was signed by Dr. Laurie Gage USDA veterinarian.

Amanda Lollar and Randy Turner then lie to the USDA and state the video of the episiotomy was altered. The video was not altered. Lollar and Turner continue to make false and defamatory statements to the USDA about the complainant to try to cover up the acts of animal cruelty and neglect. Randy Turner an animal rights attorney was aiding and abetting someone who committed animal cruelty. Video and photographic evidence is here. Attorney Randy Turner told the USDA that he wants them to change the word "investigation" to "fact finding" in regard to his client's investigation. Bat World Sanctuary was investigated.

Fortunately the USDA was able to see through their charades. The USDA informed Amanda Lollar that her permit would not be renewed March 12, 2012. Ms. Lollar decided to refuse the letter from the USDA. BWS's USDA inspector Cynthia Digesualdo replied via email to the USDA "Can we send this regular mail? She's a little far for me to hand deliver. Anyway, I can promise you she knows she's cancelled. Not happy with us and very glad to be rid of us."

August 2011 Bat World Sanctuary got in trouble with the Texas Parks & Wildlife Department for not having proper permits. Here is that article. TPWD stated that Amanda Lollar and Bat World Sanctuary are not bat experts. They do not have a TPWD exhibitor permit, their unreleasable bats are not permitted, they cannot exhibit bats, they cannot have bats with White Nose Syndrome, they cannot move the bats and they cannot have an assurance colony of bats. TPWD went on to state that Fish & Wildlife and Bat Conservation International are the true bat experts in these matters.

After Bat World Sanctuary lost their USDA permit Amanda Lollar decided to report other people with bats with USDA permits October 2012. The USDA inspector responds to the false complaint to the USDA, "It seems that a licensee in Texas (Amanda Lollar of Bat World Sanctuary) is giving her grief over her having a bat. I've seen this before years ago when I covered a portion of the state of NM and inspected the New Mexico Bat Research Institute, don't let the name fool you, there was no research being conducted. The individuals in Texas (Amanda Lollar) are under the impression that they are the definitive experts on bats. Apparently part of that expertise is that no one other themselves should be the ones to obtain and own bats of any kind." The USDA finished their investigation and concluded there were no violations. Nonetheless Amanda Lollar continues to tell her Facebook fans to keep filing reports, sending emails and signing petitions against the licensed individual who gives her bat proper care.

Currently Bat World Sanctuary is supposedly supported by the American Sanctuary Association and the Global Federation of Animal Sanctuaries. Perhaps they do not know that BWS lost their USDA permit, violations of the Animal Welfare Act were found and they are currently in trouble with the TPWD.

Add Your Comments
§Bat rescuer awarded $6.1 million in libel suit
by more importantly
Thursday Apr 25th, 2013 9:57 PM
http://www.star-telegram.com/2012/06/15/4036067/bat-rescuer-awarded-61-million.html
Add a Comment
§Case is in Appeal
by Truth & Honesty
Friday Apr 26th, 2013 11:40 AM
The case is in the Second Court of Appeals of Texas. Mary Cummins never defamed Amanda Lollar or Bat World Sanctuary. They did not prove the elements of defamation, breach of contract, admitted there were no damages and there was no proof of causation. The court order is unenforceable as it is unconstitutional.

In the meantime Amanda Lollar of Bat World Sanctuary has been stalking Mary Cummins. Four police reports have been filed. Amanda Lollar hired someone to pretend to serve documents on Cummins. That person hit her with the documents and videotaped it. Amanda Lollar posted that in her YouTube channel. The video was deleted because it was the video of a crime being committed. A copy was saved.

Amanda Lollar then committed identity theft. She pretended to be Cummins to access bank accounts. One of the accounts was for Animal Advocates. The phone call was tape recorded. The police are investigating Amanda Lollar of Bat World Sanctuary.

During this same time Amanda Lollar sent many childish, juvenile and threatening emails to Cummins thinking she was anonymous. She has never been anonymous. In these ridiculous emails Amanda Lollar attacks Cummins' age and looks. Mind you, Lollar is ten years older than Cummins. Soon everyone will see what Lollar has been doing "anonymously."

Here is a copy of the email which Bat World Sanctuary's USDA inspector sent to the USDA about Amanda Lollar refusing her certified letter. Amanda Lollar, Bat World Sanctuary are still located at this same address. They just refused the letter.
Add a Comment
Support Independent Media
We are 100% volunteer and depend on your participation to sustain our efforts!