Stop the Cover Up: Kayla Moore died at the Hands of the BPD and the People want answers! 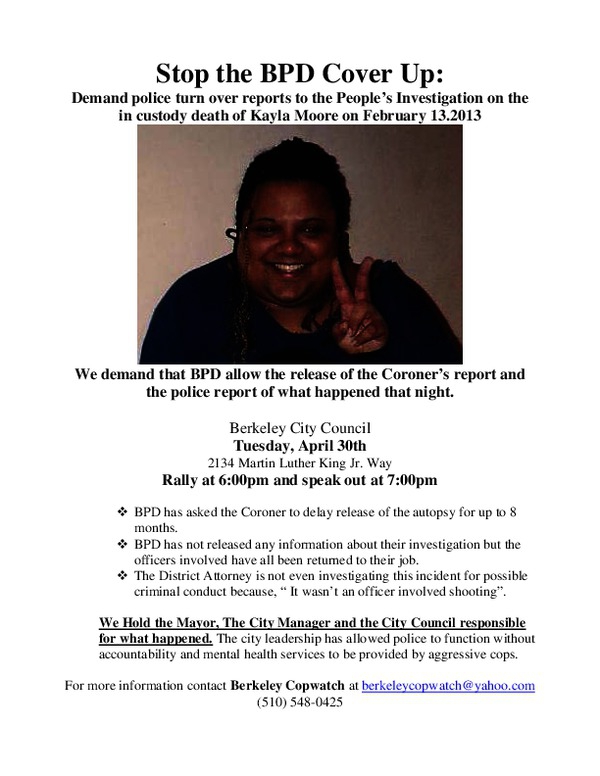 On February 13, 2013, Kayla (Xavier) Moore was killed in her home by the Berkeley Police Department.

Join us for a rally and speak out at City Council to demand that BPD allow the release of the Coroner’s report and the police report of what happened that night.

 BPD has asked the Coroner to delay release of the autopsy for up to 8 months.
 BPD has not released any information about their investigation but the officers involved have all been returned to their job.
 The District Attorney is not even investigating this incident for possible criminal conduct because, “ It wasn’t an officer involved shooting”.

We Hold the Mayor, The City Manager and the City Council responsible for what happened. The city leadership has allowed police to function without accountability and mental health services to be provided by aggressive cops.

For more information contact Berkeley Copwatch at berkeleycopwatch [at] yahoo.com
(510) 548-0425

END_OF_DOCUMENT_TOKEN_TO_BE_REPLACED
Added to the calendar on Tue, Apr 23, 2013 11:16AM
Add Your Comments
Support Independent Media
We are 100% volunteer and depend on your participation to sustain our efforts!