Add an Event
Newswire
Calendar
Features
Home
Donate
From the Open-Publishing Calendar
From the Open-Publishing Newswire
Indybay Feature
Publish to Newswire
Add an Event
Related Categories: Americas | International | U.S. | Government & Elections
Is Venezuela on the brink of civil war?
by Jonathan Nack
Friday Apr 19th, 2013 12:50 PM
"Here we don't negotiate with the bourgeoisie. Here there is revolution. And if [the opposition] continues with violence, I am ready to radicalize the revolution," said Nicholas Maduro, then President-elect, to a standing ovation at the headquarters of state oil company PDVSA. 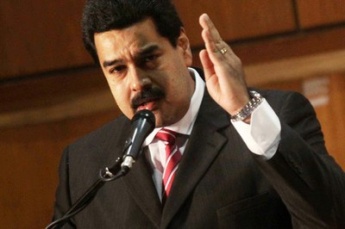 Is Venezuela on the brink of civil war?

In the wake of Nicholas Maduro's narrow victory in Sunday's election for President of Venezuela, the forces of reaction, backed by U.S. imperialists, are assessing whether they can use the moment to launch an overthrow of the Venezuelan government.

Today, Maduro was sworn in and took the official oath as President of Venezuela at a ceremony in the National Assemby attended by foreign dignitaries from over 60 countries. [ http://english.sina.com/world/2013/0419/583654.html ]

Prior to his inauguration, Maduro put the Venezuelan right, the old oligarchy, the wealthy and their supporters, along with the U.S. government and all others, on notice with this warning:

“"Here we don't negotiate with the bourgeoisie. Here there is revolution. And if [the opposition] continues with violence, I am ready to radicalize the revolution," said Nicholas Maduro, the President-elect, to a standing ovation at the headquarters of state oil company Petroleos de Venezuela SA,”” reported The Wall Street Journal. [ http://online.wsj.com/article/SB10001424127887324493704578428992329743764.html ]

Behind the calls for a manual vote recount by the opposition and it's candidate, Enrique Capriles, lurks the counter-revolutionary Venezuelan right. They have been relentlessly trying to overturn the Bolivarian Revolution led by the late President Hugo Chavez.

Behind President Barack Obama's refusal to recognize Maduro as the election winner, lurks the imperial interests of the U.S. government and of multinational corporate capitalism. [ http://mrzine.monthlyreview.org/2013/weisbrot150413.html ]

In response to a White House spokesperson who argued in support of the opposition's demand for a further vote recount, President Evo Morales of Bolivia, replied bluntly:

“ I am certain that behind those remarks, the United States is preparing a coup d’ Etat in Venezuela … I would like to express that this is a flagrant US interference in Venezuela’s democracy, as neither that spokesperson nor the US government has moral authority to question electoral results in any Latin American country or around the world.” [ http://www.plenglish.com/index.php?option=com_content&task=view&id=1318121&Itemid=1 ]

Maduro was named the winner of the election and certified as President-elect by Venezuela's National Electoral Council, CNE. The CNE reported that Maduro had won 50.8 percent to Caprile's 48.9 percent of the popular vote. The Venezuelan Supreme Court denied an opposition request to force the CNE to do a manual recount of votes. [ http://online.wsj.com/article/SB10001424127887324493704578428992329743764.html ]

Yesterday, the CNE announced that it has agreed to do an audit of 100 percent of the votes cast in the election in response to Capriles' official request. The CNE had previously said that, in response to Capriles' earlier request, it had audited 54 percent of the votes, and found no discrepancies, before it certified Maduro as the winner.
The CNE is an independent branch of Venezuela's government which is in charge of organizing, conducting, and insuring the transparency of the election process. [ https://en.wikipedia.org/wiki/National_Electoral_Council_of_Venezuela ]

The CNE has been widely praised by international observers for its outstanding performance in conducting past elections. The CNE uses a modern computer system which gives every voter a printed receipt so that they can check the accuracy of their recorded vote.

Former U.S. President Jimmy Carter, founder of The Carter Center, has said, “...of the 92 elections that we've monitored, I would say the election process in Venezuela is the best in the world.” [ http://therealnews.com/t2/index.php?option=com_content&task=view&id=31&Itemid=74&jumival=8935 ]

150 international observers were on hand to observe Sunday's vote at the invitation of the CNE. Once again international election observers certified the election was free and fair, and the vote counting process was clean and transparent.

A delegation of observers from MERCUSOR [ http://en.wikipedia.org/wiki/Mercosur ] wrote in their report, “the observers received information relative to the Venezuelan Constitution and the electoral legislation in a free and transparent form. At every point information was provided when it was requested or required, which confirmed the transparency and security of the Venezuelan electoral system.” The report concluded that, “All guarantees were provided so that Sunday’s elections were a success.” [ http://venezuelanalysis.com/analysis/8668 ]

At a ceremonial display of unity attended by high ranking government and military officials on April 16, the CNE officially certified Maduro as President-elect. In a long speech televised live by TeleSur, a 24 hour Spanish language news television network based in Caracas [ http://www.telesurtv.net/ ], Maduro repeatedly held up a copy of Venezuela's Constitution as he spoke to underscore the basis for the legality of his election.

Maduro invoked Pres. Chavez's name countless times in his speech, referred to himself as “Chavez's son” and described himself as “the first Chavista President.”

Maduro called on the opposition to respect the will of the majority and recognize the result of the election in accordance with the Venezuelan Constitution. He said he is against violence, and called for calm. He made clear that continued violence by the opposition against the government institutions will not be tolerated.

Maduro also gave a warning that if violent anti-government protests persist, or grow, “ I am ready to radicalize the revolution.”

The spooks of the U.S., and of other capitalist countries, the CIA and their ilk, are not known for respecting the laws of other countries, nor their national sovereignty, and are doubtlessly working around the clock trying to figure out ways to use the moment to foment the overthrow of the Venezuelan government.

Two U.S. embassy officials were expelled from Venezuela on March 5. Air Attaché David Delmonaco, and assistant Air Attaché  Devlin Costal of the US embassy in Caracas were expelled for being implicated in “conspiracy plans” said to include secret contacts with members of the Venezuelan military to gauge their loyalty to the regime. [ http://venezuelanalysis.com/news/8031 ]

Capriles has said that Maduro is not a legitimate president. Many in the opposition are enraged and are calling for rebellion. [ http://venezuelanalysis.com/news/8652 ] There are reports of anti-government street protesters closing off roads in parts of the country with burning tires and rock throwing. [ http://groups.yahoo.com/group/LASM/message/1 ]

Yesterday, Maduro accused Capriles of triggering the post-election violence and said, "we have stopped a coup in its first stage. They are beaten, but they are coming back with a new attack," reported Aljazeera [ http://www.aljazeera.com/news/americas/2013/04/201341912592409346.html ]

The stage is set for a further escalation of the conflict. If the Venezuelan rich, their right-wing backers, and their U.S. and other imperialist sponsors, think they're ready to launch an effort to overthrow the government, they could decide to move very soon. But are they really ready?

In short, are the Venezuelan right and U.S. government ready to start a civil war in Venezuela? Because that is what it will likely take to overturn the election result.

Even with the military and economic might of the U.S. behind them, the Venezuelan right has good reason to fear launching a civil war. Venezuela's wealthy still have a lot to lose. They still have their corporations, real estate, land holdings, servants, and luxury lifestyles.

The Venezuelan right, and its wealthy backers, remember how they were defeated when they tried to overthrow the government in April, 2002. The strategy they used then combined violent anti-government street protests and a military coup which included the arrest of Pres. Chavez. The coup leaders proclaimed a new President, Pedro Carmona, who immediately announced the dissolution of the Venezuelan National Assembly and the Supreme Court. [ http://en.wikipedia.org/wiki/2002_Venezuelan_coup_d%27%C3%A9tat_attempt ]

In response to the 2002 coup, workers and poor people flooded into the streets to defend the revolution. Many were armed. They militantly demanded the immediate return of President Chavez. They warned the rich that if their President wasn't returned immediately, they would take their protests, and their weapons, directly into the neighborhoods of the wealthy.

Faced with this extraordinary civilian defense of the revolution, as well as opposition from sections of the military that remained loyal to the Venezuelan Constitution and to Pres. Chavez, the Venezuelan right came to a startling conclusion. Restoring Pres. Chavez was preferable to facing an enraged revolutionary public.

Within two days of taking power, the right and the military coup leaders were defeated and they retreated, President Chavez was returned to power, the government was re-established, while Carmona fled the country. Restored as President, Chavez sacked the disloyal military officers involved in the coup and promoted revolutionary officers to take command in their places.

The Venezuelan right also remembers how they lost the so-called “general strike” they started later in 2002 that extended into 2003. It was another attempt to force the government to resign. This time, the strategy relied on the management of the state oil company, PDVSA, to shut down Venezuela's vital oil industry. The managers were told that the workers would be incapable of running the management side of the industry without them. Much to the dismay of the right and the imperialists, not to mention corporate management, revolutionary workers again rose to the occasion, learned to perform management tasks, and got the industry back up and running.

It was another epic defeat for the Venezuelan right. The corporate elite that used to manage PDVSA were dismissed from their positions. As workers fulfilled management functions, Pres. Chavez appointed revolutionaries to run the Board of Directors of PDVSA. [ http://en.wikipedia.org/wiki/Venezuelan_general_strike_of_2002%E2%80%932003 ]

President Obama and the U.S. government also have good reason to fear backing a rebellion that could well break out into civil war in Venezuela. Governments throughout Latin America, the Caribbean, and much of the world, would strongly condemn such a U.S. military intervention. A number of Latin American countries closely allied with the Venezuelan government might well offer it material assistance, perhaps even military support. The days when the U.S. could just throw its military weight around Latin America without resistance are over.

With the U.S. military already stretched thin and bogged down in the Middle East and South Asia, and with military tensions rising in the Korean Peninsula, no one can predict with any degree of certainty the outcome of the U.S. engaging in such a major confrontation in South America.

It's conceivable, of course, that the Venezuelan right, backed by U.S. power, could succeed in overturning the election result, or even of overthrowing the revolution, but such an outcome is far from assured.

It's also conceivable that people power, Venezuelan patriotism, armed self-defense, and international solidarity could combine to lead to yet another triumph by the forces of the Bolivarian Revolution.

Should the Venezuelan right and the U.S. government suffer another humiliating defeat, such as the defeats suffered in 2002 and 2003, they could well face the prospect of not only a more radically socialist Venezuelan government, but also of radicalizing all the various socialist and leftist governments, and radical and revolutionary social movements currently flourishing throughout Latin America.

There is no reason to doubt either the tenacity of the Venezuelan right in its quest to return to power, nor the relentlessness of U.S. and multinational corporate capitalist imperialism. On the other hand, the wealthy classes are always acutely aware of what they have to lose. The rich don't gamble recklessly with their wealth.

All things considered, as much as they may hate to, the Venezuelan right and U.S. government might reluctantly conclude that they are not really prepared for civil war and have no alternative, at least for the time being, but to accept that Maduro is now President.
§Poster in homage to President Hugo Chavez
by Jonathan Nack Friday Apr 19th, 2013 12:51 PM 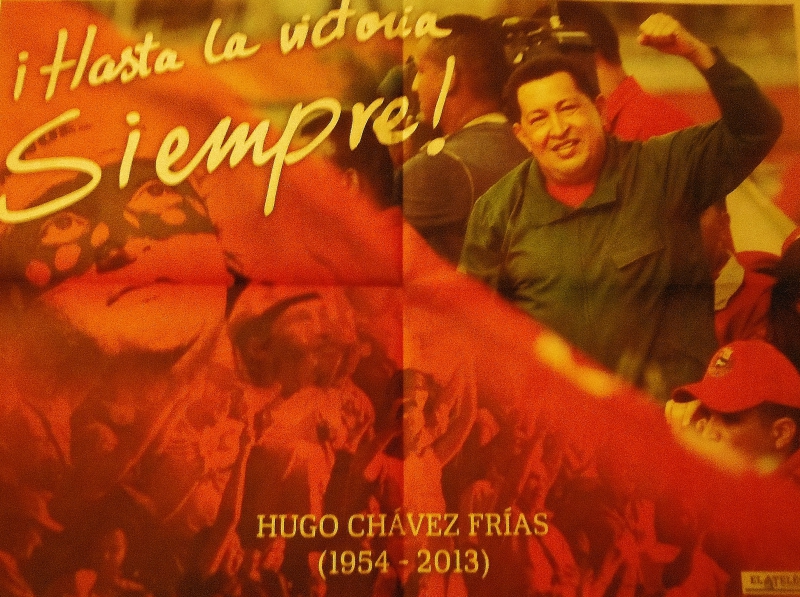 original image (3657x2733)
Photo by Jonathan Nack
Add Your Comments
Support Independent Media
We are 100% volunteer and depend on your participation to sustain our efforts!