All drums and dancers welcome!

Powwows are often cultural touchstones for American Indian peoples living far away from home, family, and community. The modern powwow was brought by American Indians to cities such as Los Angeles, New York, San Francisco, Minneapolis & St. Paul, Tulsa, Austin, and many others as a way to connect to one another culturally, socially, and spiritually.

With a population of just 1 percent of the total population of the United States, American Indians are often culturally isolated and experience ongoing colonial trauma as they move away from home, family, and community; powwows are a chance to be around other American Indians, share cultures, songs, dances, and regalia in someplace very far away from what they have known.

Sophia touched many lives during her 27-year career at UC Santa Cruz. She served as financial aid adviser, mentor, and advocate for many UCSC students. Prior to joining the Financial Aid and Scholarship Office staff, she was employed at Stevenson College. She also volunteered for well over 10 years as a residential preceptor at Merrill College and College Eight. A natural leader, Sophía was charismatic, powerful, genuine, and enormously generous. She dedicated her life to the education and well-being of others and to fighting hunger and poverty. At UC Santa Cruz, Sophía was responsible for training staff in the Financial Aid and Scholarship Office as well as for serving as an adviser for students. She was involved in the Chicano/Latino and American Indian communities, she served as a tireless advocate for AB 540 students, and she was a generous contributor to the UC Santa Cruz Food Pantry and to the Educational Opportunity Program Lending Library.

The American Indian Resource Center honors Sophia's life and her commitment to higher education and social justice by naming this annual event for her, an event that seeks to do what she did in her life: make a difference for people in need.
END_OF_DOCUMENT_TOKEN_TO_BE_REPLACED
Added to the calendar on Wed, Apr 17, 2013 5:00PM
Related Categories: Santa Cruz Indymedia | Arts + Action | Education & Student Activism | Racial Justice
§Sophia Garcia Robles Memorial Drum Feast
by Drum Feast 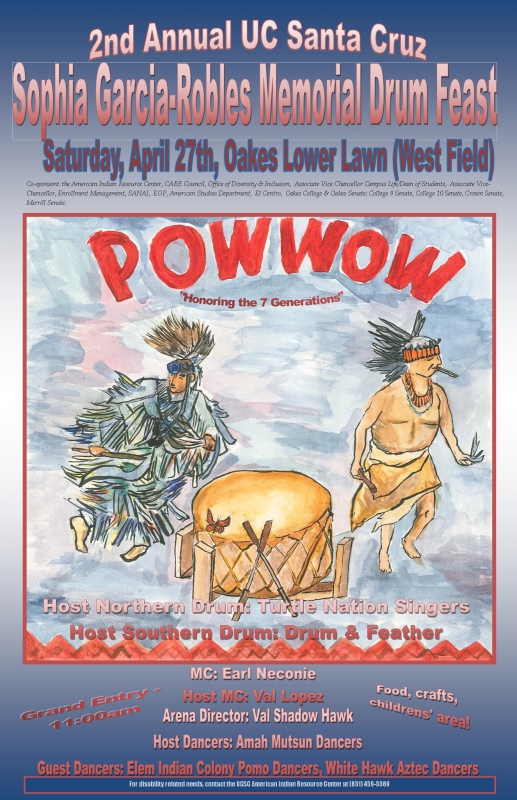 original image (1325x2048)
Sophia Garcia Robles Memorial Drum Feast
Add Your Comments
Support Independent Media
We are 100% volunteer and depend on your participation to sustain our efforts!