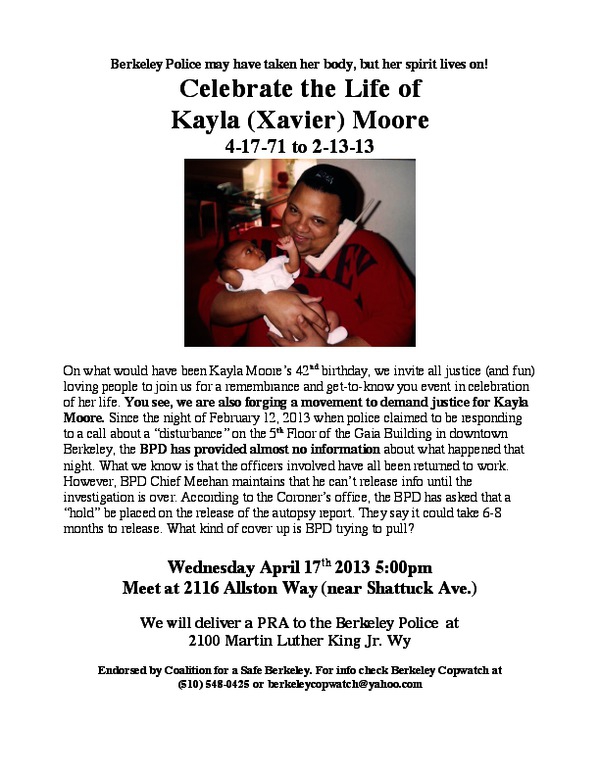 Where: 2116 Allston Way (near Shattuck Ave.) in Berkeley

Press Conference and delivery of the Public Records Act Request to the police station.

On what would have been Kayla Moore’s 42nd birthday, we invite all justice (and fun) loving people to join us for a remembrance and get-to-know you event in celebration of her life. You see, we are also forging a movement to demand justice for Kayla Moore. Since the night of February 12, 2013 when police claimed to be responding to a call about a “disturbance” on the 5th Floor of the Gaia Building in downtown Berkeley, the BPD has provided almost no information about what happened that night. According to the Coroner’s office, the BPD has asked that a “hold” be placed on the release of the autopsy report. They say it could take 6-8 months to release.

Quote by Elysse Paige- Moore, stepmother: “Xavier had a very difficult life, but an indomitable spirit. He suffered with mental illness from an early age, struggling throughout his life with paranoid schizophrenia and posttraumatic stress syndrome. He also had a near genius I.Q. and a photographic memory. He was a poet and a gifted singer and oh could he dance, even at 350 lbs! He was generous, and often took in homeless friends giving them shelter and cooking 3 course gourmet meals for them. Despite his challenges, he was resilient and resourceful. His spirit was unbreakable and served as an example to everyone he touched.”


Demands of the Berkeley Police Department:
Release the police reports on the incident that took place on February 12th, 2013.
Release the Coroner’s Report.
Publish the investigation results.

Background:
As details of the tragic death of 41 year old Berkeley resident Xavier Christopher Moore in police custody begin to emerge, residents are asking why this person died and why police are slow to release information in this case.

According to Berkeley Police, officers were dispatched for a mental health evaluation at about 11:50 pm on February 12, 2013, although neighbors on the same floor heard no disturbance until the police arrived.

After officers appeared at Moore's residence the situation escalated, and shortly thereafter Moore died in police custody. Neighbors observed officers carrying Moore on a gurney, unconscious and in restraints, out of the building. In a city that is known internationally for disability awareness, social consciousness and protection of civil liberties, it is unacceptable that a mental health evaluation should end in death. The District Attorney says that since this is not an officer involved shooting, they are not even investigating the case. We find all of this unacceptable.

We are calling on the Berkeley Police Department to release the police reports and the Coroner’s Report, and to publish the investigation results on the incident that took place on February 12th, 2013. If misconduct has occurred, officers must be disciplined. If it was a failure of policy and administration, the public must be allowed to analyze the case and to assist in addressing this breakdown in city services. In any case, we demand that the Berkeley Police Department comply with Public Records Act requests and that they make information about that night’s events available to the public as quickly as possible.

END_OF_DOCUMENT_TOKEN_TO_BE_REPLACED
Added to the calendar on Sun, Apr 14, 2013 3:46PM
Related Categories: East Bay | LGBTI / Queer | Police State & Prisons
Add Your Comments
Support Independent Media
We are 100% volunteer and depend on your participation to sustain our efforts!