by Dan Bacher
“Ours is not a speculative concern,” said Leonard Masten of the Hoopa Valley Tribe. “Last year federal, state, and tribal fishery agencies forecasted a potentially devastating fish kill in the Klamath River because of low Klamath basin water supplies and a record-high population of returning fall Chinook. Reclamation took action and set aside 92,000 acre-feet of Trinity River Division water and released nearly 39,000 acre-feet of additional water to avoid a disaster.” 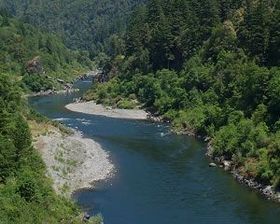 The Brown administration claims the Bay Delta Conservation plan will fulfill the “co-equal goals” of ecosystem restoration and water supply reliability, while fishermen, Indian Tribes, environmentalists, family farmers, elected officials and other plan opponents say the project will lead to the death of the Delta ecosystem and farming. The multi-billion dollar project proposes to divert a large proportion of the Sacramento River’s flow into two 35-mile tunnels beneath the Delta.

The Trinity River, the largest tributary to the Klamath River, is the only out-of-basin water supply diverted into the Central Valley. The legendary salmon and steelhead river flows though the Hoopa Valley Reservation and Humboldt County before joining the Klamath at Weitchpec.

“The Trinity River is vitally important to the North Coast economy,” stated Humboldt County supervisor Ryan Sundberg. “If the Bureau of Reclamation (BOR) and state agencies don’t make the decision to uphold our long-established right to Trinity River water, what confidence can other Californians have that their rights will be honored in the BDCP process?”

Sundberg said Humboldt County is expecting a decision from the Department of Interior regarding its water right and this could upset the BDCP process if the county water is not considered in modeling.

In 1964, the BOR, managed by the Department of Interior, began delivering Trinity River water to the Central Valley through tunnels. Federal and state law limited those deliveries by setting aside water for fisheries and making available an additional 50,000 acre-feet supply for economic development by Humboldt County and other users. The federal law was passed in 1955, while the state permits and Humboldt County contracts were negotiated in 1959.

“Thus far, the BOR has failed to honor this water right, and only recently began to honor fisheries commitments through implementation of the 2000 Trinity River Record of Decision,” according to a joint press release from the County and Tribe.

Humboldt County and the Hoopa Valley Tribe said they have repeatedly warned the Governor and BDCP planners that it is a mistake to assume that 50,000 acre-feet of Humboldt’s Trinity water is available even though federal and state lawmakers allocated it to the North Coast nearly 60 years ago.

They have been in discussions with Interior and are expecting a decision that upholds Humboldt’s water right. Last July, Interior said it would confer with them before any decision is made, but so far there has been only silence.

The Hoopa Valley Tribe, which depends on salmon for sustenance, says it is worried because Reclamation "has stated inadequate fishery water supplies in the Klamath River basin have become the new norm. That means heightened risk of conflict over competing uses due to the fact the salmon are increasingly depending on Trinity flows," according to the County and Tribe.

“Ours is not a speculative concern,” said Leonard Masten of the Hoopa Valley Tribe. “Last year federal, state, and tribal fishery agencies forecasted a potentially devastating fish kill in the Klamath River because of low Klamath basin water supplies and a record-high population of returning fall Chinook. Reclamation took action and set aside 92,000 acre-feet of Trinity River Division water and released nearly 39,000 acre-feet of additional water to avoid a disaster.”

This year another great return of fall run Chinook salmon is forecasted and already government agencies, such as the Pacific Fisheries Management Council, are considering asking for similar action. The Klamath River abundance forecast is 727,682 fall run Chinooks, not the record abundance forecasted last year, but still well above the long term average. A record run of 302,108 fall adult Chinook salmon returned to the Klamath River in 2012.

Humboldt County emphasized they are willing to use their water right to protect Klamath River fisheries.

“In the course of the last half-century, Humboldt County and the Hoopa Valley Tribe have stood fast for our rights and interests,” stated Supervisor Sundburg. “We all have a right and responsibility to protect this precious resource, and urge all Californians to oppose any form of a BDCP that takes more of our water. We also urge Interior to act to resolve this issue.”

“To the best of my knowledge the 50,000 AF of Humboldt County's water has never been considered in any plans for the Twin Tunnels,” said Stokely. “Historically, the Bureau of Reclamation has never indicated in any way that they would provide this water, even though it is a requirement of federal law, a contract between Humboldt County and Reclamation, as well as being a condition of each of the Bureau's 8 state water permits. The Bureau promised a final decision on this issue over 2 years ago but there is still deafening silence other than the turbines on the Trinity's way to the Sacramento River and Westlands Water District.”

“The Bureau was prepared to release over 80,000 acre feet in 2012 if it had been necessary. That water essentially is Humboldt County's 50,000 AF. The Bureau ought to just let Humboldt County have their water and then the county can participate as a full partner instead of a colony of the Westlands Water District,” concluded Stokely.

Richard Stapler, Deputy Secretary for Communications for the California Natural Resources Agency, responded to the warning by the County and Tribe. “We’ll take a look at this latest request, but we’ve also written letters on this issue several times in the past," he said.

He referred to a two year old response from Secretary Laird to Assemblyman Chesbro on this issue and a letter from earlier this year from Laird and the chairman of the State Water Quality Control Board to north state water users.

Along with the threat to Trinity River salmon and steelhead, Delta advocates fear the construction of the tunnels will lead to the extinction of Central Valley Chinook salmon, steelhead, delta smelt, Sacramento splittail and other imperiled fish species that have declined dramatically due to massive water exports to corporate agribusiness, the oil industry and Southern California water agencies.

The Sacramento River fall run Chinook salmon population, the driver of West coast ocean fisheries, declined to record low levels in 2008 and 2009, due to a combination of record water exports out of the California Delta, declining water quality and poor ocean conditions. Although the fall Chinook salmon runs have increased over the past couple of years, the number of fish still falls far short of the nearly 1 million fish mandated under the doubling goals of the Central Valley Project Improvement Act of 1992. (http://www.counterpunch.org/2012/11/23/salmon-on-the-brink)

Related Categories: California | Central Valley | North Coast | Environment & Forest Defense | Government & Elections
Add Your Comments
Support Independent Media
We are 100% volunteer and depend on your participation to sustain our efforts!