by Chris Rojas
Protesters held a demonstration yesterday in San Francisco in solidarity with Guantanamo Bay hunger strikers, culminating in a dramatic civil disobedience where demonstrators wearing orange prison jumpsuits blocked traffic. Police gathered and attempted to break up the protest, pushing protesters off the street, and arresting one. The hunger strike has garnered international media attention and public outcry as over 130 out of 166 detainees are refusing food, prompting prison officials to force feed them, which is considered torture by the UN and other bodies. More demonstrations are planned for this Thurday, April 11 in the Bay Area as well as across the US for a day of action. 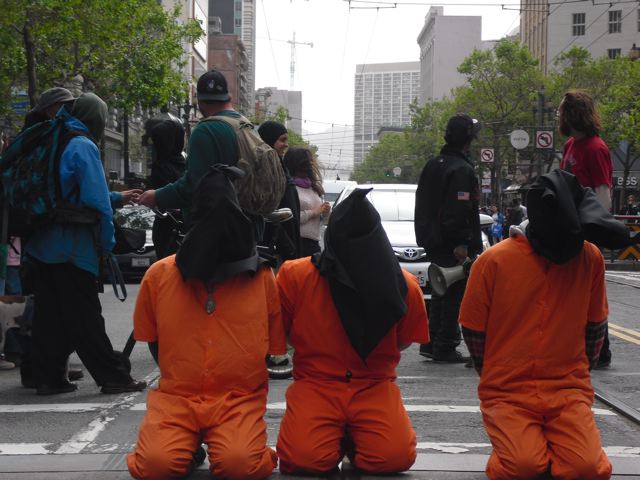 Downtown San Francisco near the Powell and Market St. intersection was the scene of a dramatic demonstration and act of civil disobedience yesterday afternoon as protesters held a vigil then blocked traffic to raise awareness of hunger striking detainees at Guantanamo Bay. About 50 demonstrators, many from the Muslim community, were soon joined by shoppers and passersby as a small contingent of activists dressed in orange prison jumpsuits decided to occupy the middle of Market St in civil disobedience. The demonstrators in prison garb, wore black hoods over there heads and knelt down on the ground while Hijab wearing Muslim women soon joined them on the street in a stunning and courageous act of solidarity, prompting others to swell into the street to protect the mock detainees from arrest.

As the demonstration began to march down Market St, police gathered and charged at the demonstrations pushing protesters and threatening to attack them with batons demanding the march move out of the street. One woman was targeted by a snatch and grab tactic, and brutally brought to the ground and arrested. Crowds gathered and passersby joined in the chant, "Let her go! Let her go!" as she was whisked away in a police cruiser. The protesters than marched to Union Square for a speak out, which ended with the Muslim contingent kneeling in prayer as the non-Muslims surrounded them, guiding pedestrians and tourists around the group invoking images of Christians protecting Muslims during prayer in Tahrir Square during the Egyptian uprising.

The vigil was held in solidarity with the 130 detainees out of 166 in Guantanamo Bay Detention Facility that are on hunger strike, refusing food as a protest against their brutal detention conditions. The strike has been growing in recent days garnering international media attention, prompting even the UN High Commissioner of Human Rights and the NY Times editorial board to call for a closing of the prison. A number of detainees are being force fed, in which they are shackled to metal chairs and a feeding tube is forced down their esophagus through the nostrils. This brutal and terrifying tactic is recognized as torture by international bodies. The detainees have not been charged with any crimes and held indefinitely, most over ten years. Eighty-six of the prisoners were approved to be released by a Federal task force, yet the government has still said they will not be released. Solidarity protests such as yesterday are spreading. Demonstrations have been held in Kuwait, Yemen, New York and Washington DC, and more are being organized across the U.S. for a day of action this Thursday April 11, including in San Francisco and Oakland.
§Protesters blocking Market St
by Chris Rojas 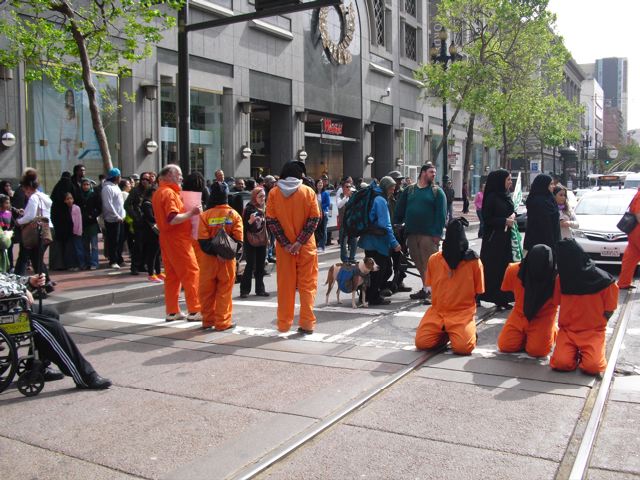 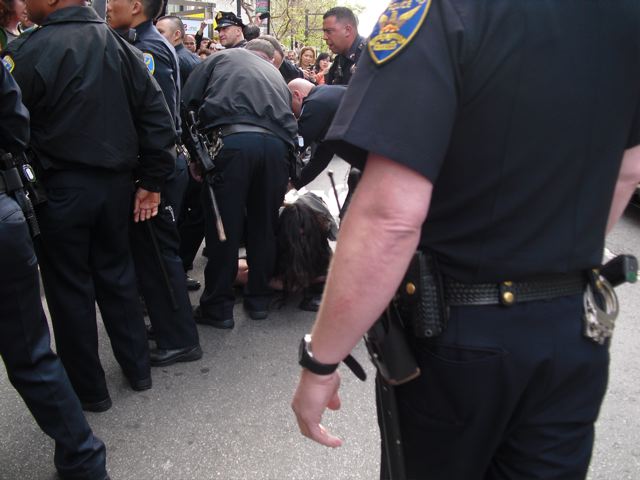 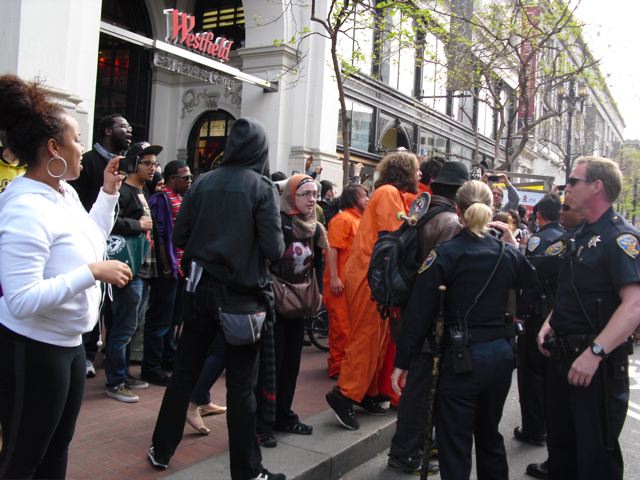 §Stand up
by Chris Rojas 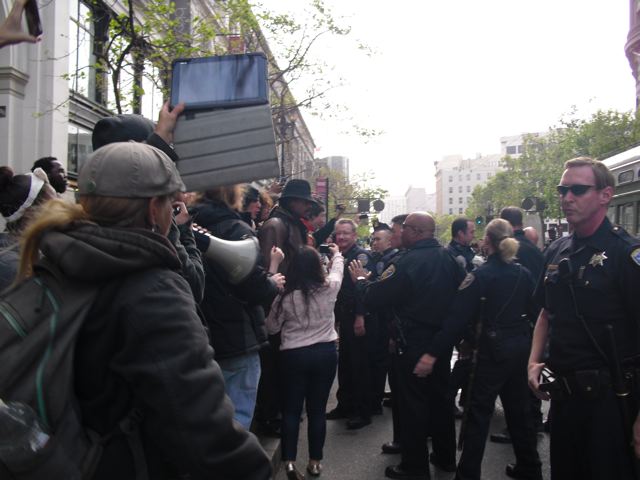 §speak out
by Chris Rojas 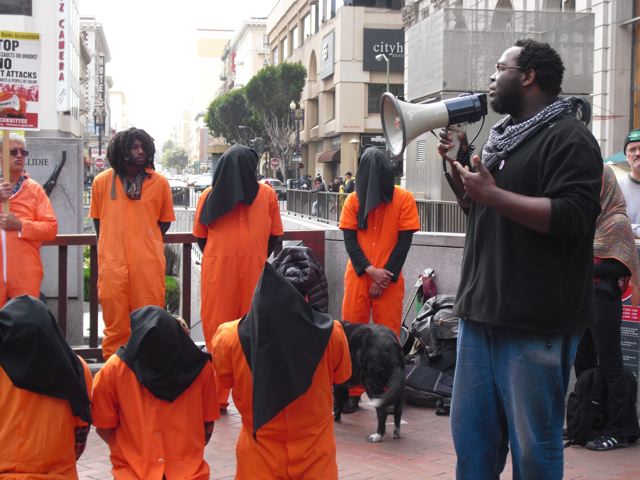 Add Your Comments
Latest Comments
Listed below are the latest comments about this post.
These comments are submitted anonymously by website visitors.
TITLE
AUTHOR
DATE
a call for action: don't let Guantanamo hunger strikers die
Curt Wechsler
Witness Against Torture
Matt
censorship
Graasroots
Instead of chanting "let her go"
no way
Well done, San Francisco
London Guantanamo Campaign
Support Independent Media
We are 100% volunteer and depend on your participation to sustain our efforts!