by QUIT! (info [at] quitpalestine.org)
Authors Alice Walker and Angela Y. Davis, along with prominent filmmakers Kim Klausner and Susan Stryker, have joined the call for Frameline, the LGBT International film festival, to stop partnering with the Israeli government. Palestinian LGBT organizations have demanded that international queer organizations respect the call for boycott, divestment and sanctions against Israeli institutions until Israel lives up to its international human rights obligations. Join their cry for freedom. 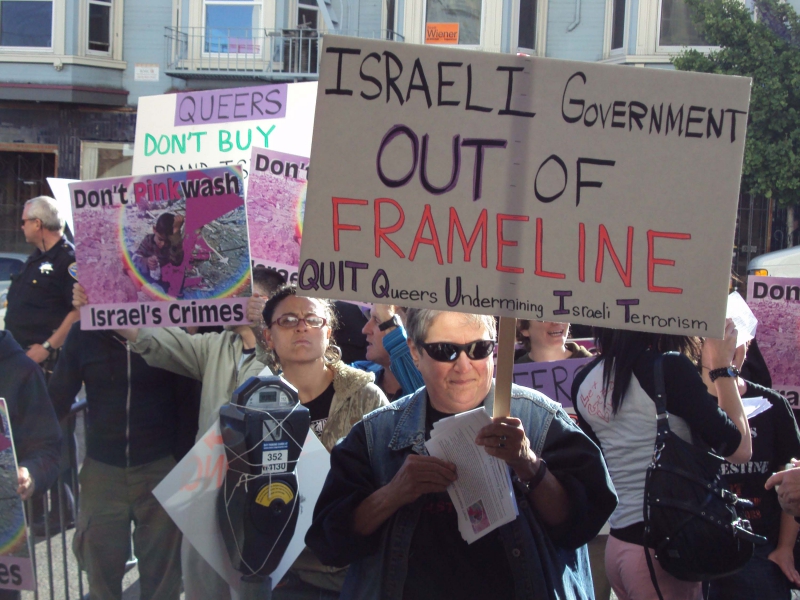 original image (3000x2250)
The San Francisco International LGBT Film Festival, Frameline, is the largest queer cultural event in the world. It has for many years had a partnership with the Israeli consulate, which is aggressive in promoting Israeli filmmakers around the world, including queers. Israel is trying to use its queer-friendly policies for Israeli Jews to pinkwash its continuing denial of Palestinian rights and theft of Palestinian land. For over five years, Queers Undermining Israeli Terrorism and other Bay Area queers have been pressuring Frameline to stop accepting money and sponsorship from the Israeli government. We are not asking them not to show Israeli films or bring Israeli filmmakers who actively oppose occupation and support Palestinian equality.

Dear Board of Directors of Frameline:

We are asking Frameline to discontinue its financial relationship with the state of Israel. After years of conversation behind the scenes, it is time for Frameline to stop taking money from the Israeli government and to join a growing international movement of artists, academics, filmmakers and writers who support the decades-long Palestinian struggle for self-determination and a viable political and economic state.

LGBTQI Palestinians have asked international queers to respect the cultural and academic boycott of Israel called by Palestinian civil society in 2005. Please read their statement. The call of Palestinian civil society makes it clear that any institution sponsored by or partnering with any agency of the Israeli government is a target of boycott by people who support a just peace in the region. Boycott, divestment and sanctions are time-honored nonviolent strategies for political and social change. Queer Palestinian groups and other queer organizations have urged Frameline to take a stand against the injustices suffered by the Palestinians under occupation by Israel.

The Israeli government is specifically targeting the LGBTQI community in a campaign to “rebrand” Israel as a progressive, queer-friendly democracy. We call this a “pinkwashing” of the brutal realities that Palestinians face under an illegal military occupation. In fact, the “pinkwashing” also covers up the fact that LGBTQI Palestinians suffer from injustices of occupation. Despite Israeli marketing tactics, support for the boycott is growing rapidly in the LGBTQI community, especially in San Francisco. Frameline’s continued willingness to use Israeli government money is divisive and counter to the values of freedom that Frameline claims to hold.

We recognize that the struggle for LGBTQI liberation must occur in the context of the liberation of all people, including Palestinians. Working against Israeli apartheid means refusing money or other sponsorship from the Israeli Consulate.