Add an Event
Newswire
Calendar
Features
Home
Donate
From the Open-Publishing Calendar
From the Open-Publishing Newswire
Indybay Feature
Publish to Newswire
Add an Event
Related Categories: Santa Cruz Indymedia | Police State & Prisons
Attorneys for 4 of the Santa Cruz 11 go to Status & Sanctions Hearing Monday
by Robert Norse
Friday Apr 5th, 2013 4:41 PM
The persecution and prosecution of Gabriella Ripply-Phipps, Brent Adams, Angel Alcantara, and Cameron Laurendeau grinds on Monday 8 AM in Department 6 in Santa Cruz Superior Court. The status hearing will schedule pre-trial motions and the trial itself, now slated for early May, but likely to be postponed because of one of the attorneys has a conflict. Meanwhile attorneys for the four have appealed to a higher court for a Writ to stop the proceedings and throw out the cases in a challenge to Judge Volkman's dismissal of a 995 Motion last month that itself challenged the forwarding of felony vandalism charges against the 4 to trial. If the trial proceeds, it's expected to take 2 weeks. 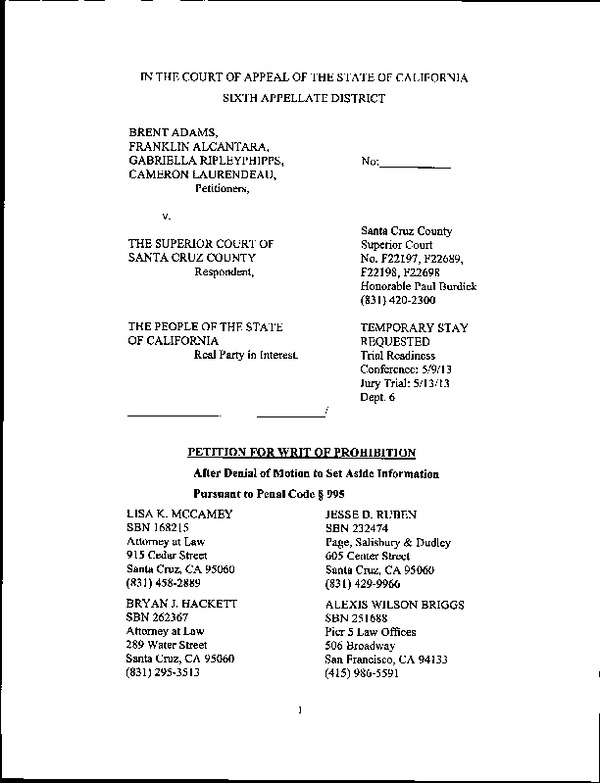 Download PDF (979.9KB)
These four defendants are the last of the Santa Cruz Eleven.

INCOMPETENT AND MENDACIOUS D.A. REBEKAH YOUNG--FIRED OR RESIGNED?
Several weeks ago, Bob Lee's District Attorney's office revealed that assistant D.A. Rebekah Young, who earned the dubious distinction of being the only D.A. in memory to be sanctioned by the court for misconduct in repeatedly failing to turn over police video and records to attorneys for the eleven defendants. Rumor had it that Young was headed for Texas to resume her career as a reporter in Austin or Dallas.

Some wondered why such a young and inexperienced lawyer was assigned to face eleven attorneys in court in such a high-profile case Considering defendants--if found guilty and given the maximum--could have faced seven years in prison--each. Defendants and their allies expressed both a sense of vindication that Young was gone from the department and apprehension that a more experienced team was likely to be taking over the prosecution.

EVEN TOKEN SANCTION IMPOSITION STALLED BY COLLUSIVE JUDICIARY?
The unprecedented $500 "slap on the wrist" fine leveled against the prosecution for misconduct had neither been paid nor formally appealed after the 60 day period ran out in March. The D.A.'s Office (or Young herself) reportedly asked the Court whether the fine was against her personally or the office of D.A. Bob Lee. No answer was forthcoming, and the time to appeal the sanction ran out after that 60 day period expired.

Scuttlebutt around the Superior Court Clerk's office had it that the issue might come up at this April 8th hearing. The actual costs to at least two of the attorneys involved ran into the tens of thousands of dollars for the dozen or so hearings and multiple motions and ignored discovery demands. These were disallowed by Judge Burdick in his token fine of Young. He also refused to dismiss the cases as a sanction for the abusive prosecution that has repeatedly concealed or failed to present evidence demanded by the defense (and ordered by the Burdick himself).

NO ACCOUNTABILITY FOR THE WITCH HUNTERS, NO VINDICATION FOR THE VICTIMS.
In spite of the fact that seven of the defendants after months of ordeal had their cases dismissed for lack of evidence, though none have yet demanded a factual innocence hearing (which reportedly is nearly impossible to win).

None have filed complaints of misconduct and malfeasance with the Bar Association and/or the Commission on Judicial Performance for the political prosecution and failure to turn over documents in repeated contempt of court orders to do so.


CASES DISMISSED BUT THE CARNIVAL OF CRUELTY CONTINUES:
The Final Four defendants face a possible four year sentence and a "restitution fine" to Wells Fargo Bank of $23,000 or more. There has been no evidence presented in the many hours of hearings that any of the four destroyed or vandalized any property. Rather the tangled theory of the discredited Young was that the mere presence of the four in the building was sufficient evidence of their vandalism under an "aiding and abetting" theory.

FANCIFUL VANDALISM CHARGE
Critics pointed out that though Young had presented some evidence that some were in the building (though no clear evidence that they had refused to leave after being warned), there was no testimony that they "aided and abetted" the trespass action--a requirement for the finding that they were also responsible for the "probable consequence" of felony vandalism by parties unknown.

CRIME OR CLARION CALL TO THE COMMUNITY?
The "trespass" is described by others as a First Amendment activity shared by hundreds as well as a form of direct action whistle-blowing against the acknowledged criminal bankster Wells Fargo, who leased the vacant building for the last 3 1/2 years prior to the occupation and continue to lease the vacant structure.

That building like other vacant banks downtown has become a squat refuge for some of the more desperate or audacious of the city's homeless population. Santa Cruz has legal shelter for less than 5% of its homeless population two-thirds of the year and a perpetual waiting list. One of the stated objectives of those who actively occupied the building and announced their intentions (none of whom are on trial) was to create a Community Center that might also serve to shelter those in need.

GRIM HISTORY IN DETAIL
For recent history of the case, see "Four Individuals to Stand Trial for 75 River Street Bank Occupation" at http://www.indybay.org/newsitems/2013/03/12/18733496.php .

For a transcript of the March 11th Hearing which sent the cases forward to trial and the legal papers challenging that misuse of legal power see below.

For a broader perspective of the occupation and subsequent legal history see http://www.thestreetspirit.org/the-santa-cruz-eleven-are-political-scapegoats/ . 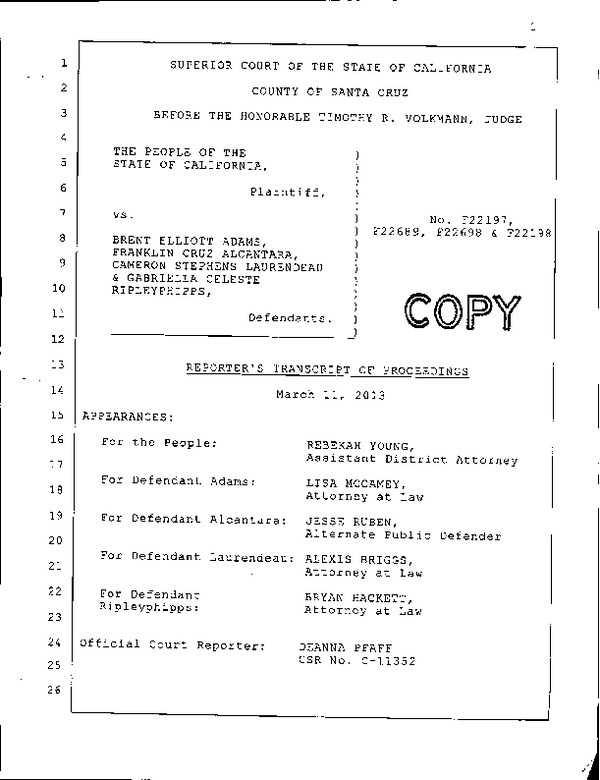 Download PDF (916.2KB)
Judge Burdick at this March 11th Hearing Forwarded the "Trespass" and "Felony Vandalism" Charges to Trial. The appeal document above seeks to have that judgment overturned.
Add Your Comments
LATEST COMMENTS ABOUT THIS ARTICLE
Listed below are the latest comments about this post.
These comments are submitted anonymously by website visitors.