by Global Action Against WTO!
Call to action of the Indonesian People's Movement Against Neocolonialism-Imperialism toward Bali WTO Ministerial meeting on 3-6 of December 2013 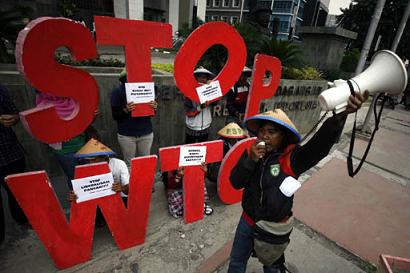 Deal a decisive blow to Neoliberalism. The time is now for Economic Justice!

The capitalist system is in a deep crisis. Since the 2008 financial crisis where the system nearly imploded, it has yet to fully recover. And instead, the crisis has spread and has deepened the food, economic, energy and climate crises. The deep systemic crisis is crystal clear evidence that the neoliberal regime must come to an end. However, instead of listening to the 99 percent, the governments, led by the G-20, have imposed austerity measures, cutting social services, making the people pay for the bailout of banks and corporations and doing nothing to curb the speculators who played a major role in the crises.

To make it worse, these same governments have been reviving international institutions that have long been delegitimized, such as the International Monetary Fund (IMF), the World Bank and now the World Trade Organization (WTO). Together with these institutions, there is a new push for further free trade liberalization, pushing a new wave of free trade agreements (FTAs) such as the Transpacific Partnership Agreement, the US-EU FTA, the EU FTAs with countries of Asia, Africa and Latin America, the Bilateral Investment Treaties and the Asia-Pacific Economic Cooperation (APEC) and a new model of capitalist exploitation of nature called the “green economy.”

Asia is no stranger to this crisis

The 1997 financial crisis that crippled the countries of Asia has left a deep scar. In a blink of an eye, currencies lost up to 70 percent of their value, local businesses suddenly had debts they could not afford and it plunged millions of people below the poverty line and into unemployment. Indonesia alone, by January 1998, had lost 75 percent of its currency value.

Years after the devastation, most analysts had come to the agreement that it was the liberalization of the economies of Asia, particularly its capital accounts, that had allowed for speculators to come in and out, taking billions of dollars with them, leaving crashing economies behind them. It was also the years of Structural Adjustment Programs imposed by the International Financial Institutions that had turned Asia into export-oriented economies, growing cash crops, becoming completely dependent on the international markets. Finally, the austerity measures that the IMF imposed in the wake of the crisis, did much more harm and wreaked the economies even further. These are the very same austerity measures that the G-20 governments are now imposing on their peoples.

Many years, after, we can still see the dependency of Asian economies on the international market. In Indonesia, the liberalization of its market led to the increasing dependency on the import of various goods. In 2012 alone, Indonesia imported around Rp125 trillion (13 billion USD) worth of food. It among others consisted of beef, wheat, rice, soybean, fish, salt, and potatoes. As a result of the high dependence on food imports, particularly in the fishery sector, the sector’s labor force has gone down. Furthermore, increased importation will further weaken the domestic sectors, impacting especially on the women whose role and contribution to agriculture will diminish.

Another factor that makes matters worse, is the increasing protection of foreign investors. Based on the Jakarta Stock Exchange data in 2012 alone, the value of foreign investment in Indonesia is around Rp 436 trillion (45 billion USD) or 70 percent of the total value of stock trading. In 2012, foreign direct investment in primary sector of food crops, plantation and mining was worth 4.8 million USD. This increasing trend of investment in primary sectors have led to escalation of agrarian conflicts, land and natural resource grabbing by corporations and investors.

In addition, the amount of foreign investment does not correlate with the enhancement of welfare for Indonesian workers. There is a decline in labor absorption. In the agriculture sector for example, during the past few years, 450,000 workers were not absorbed and this has increased the number of unemployment. These facts describe how the national sector, in particular the small economy, has been really hit by foreign companies. And that the government of Indonesia has been giving more guarantees to the foreign investors than its people.

However, this tale of dependency on the international markets and the protection of foreign investors and transnational corporations over the people, can be seen not only in Indonesia but across the region as well. In South Korea, local farmers who have been indebted and plunged into poverty because of trade liberalization, have been led to commit suicide. In the Philippines, the poverty incidence among the fishing population is now at 53 percent, several points higher than the national average of 30 percent. In India, welfare workers have very low wages in special economic zones as part of the privileges provided to investors that was in the investment deal in the Free Trade Agreements signed by India. In Thailand, because of trade related intellectual property rights, countless numbers of HIV and HIV/AIDS patients die as they cannot afford the patented anti-retroviral drugs they need to live.

We need to Change the System

Humanity and Nature will not have a future if we continue down this path paved by capitalism. This system of overproduction, overconsumption, and the over-exploitation of Nature must end. The capitalist principle of endless growth has pushed our planet to its limits and the people have been paying the price with their lives. Extreme weather, floods, droughts, typhoons – have all led to the displacement of millions of people, led to the loss of livelihoods and has led to the loss of lives. In the Philippines alone, the recent devastation by Typhoon Bopha left more than a thousand dead in its wake.

The WTO, FTAs and investment agreements only seek to protect the interests of transnational corporations and the 1 percent that profit out of the crises. We need to end the reign of neoliberalism and put a stop to the WTO and the new wave of FTAs threatening to sweep the world.

The time is Now for Economic Justice

We need to debunk the myth that without the WTO, there will be chaos. We need to demand an end to the free trade regime and fight for a world without the WTO. There are alternatives to free trade and dependency on international markets. Trade needs to be at the service of the people and not the other way around.

What we demand and propose is Economic Justice – a system where there is redistribution of wealth and the recovery of peoples’ control over vital sectors of our economy in order to better serve the people instead of the elites. The financial sector and the banking industry cannot speculate and gamble with the future of humanity. The extractive sector, the industries, the agri-business, the service sector cannot over-exploit our Mother Earth and treat humans as slaves.

The Roadmap to Bali

In this light, the Indonesian People’s Movement Against Neocolonialism-Imperialism (Gerak Lawan) would like to work hand in hand with other movements in Asia and around the world, to dismantle the ongoing efforts to revive the WTO in the upcoming Ministerial meeting to be held in Bali, Indonesia on 3-6 December 2013.

In this opportunity we would like to link and strengthen our struggle in Indonesia with other movements in our region and the world, with the following proposals:

1. Declare the WTO as illegitimate – The WTO has abused its legal mechanisms to constrain the sovereignty and rights of States to develop national policies for people and nature. This needs to end.

2. We want a world without the WTO – No matter how you reform the WTO or improve its agreements, it will never be fair or just, as it is built on the principles of free trade, endless growth and the capitalist exploitation of people and nature. And this includes changing the leadership of the WTO. Even if a new Director General is elected, the WTO will never have the peoples’ welfare in mind.

3. Revoke all FTAs and investment treaties and demand that our governments not sign on to any more FTAs or BITs –The push for further trade liberalization needs to be stopped immediately. Peoples and nature have endured enough abuse.

4. Formulate an alternative model of international trade based on Economic Justice – Social movements, peasants, fisherfolks, indigenous peoples, women, youth, workers, migrants, environmental and trade justice activists and organizations all have proposals of alternatives that are based on justice. Many have in fact been implementing their alternatives such as agroecology, food sovereignty and several other examples, all showing that it is possible to have a different kind of way of developing and co-existing with Nature. We can come together and reimagine an international trading system that promotes Economic Justice and is based on complementarity, cooperation and solidarity.

We will have a series of activities in the lead up to the mobilizations during the Bali Ministerial and we call on all of you to come join us as we deal a decisive blow to neoliberalism and push forward our alternatives.

We therefore call on all social movements, peoples organizations, trade unions, women, migrants, youth, and environmental and trade justice activists, occupy movements, indignados and other new movements, to all come to Bali, Indonesia this December 3-6, and together, stop the WTO and FTAs and push for Economic Justice. Let us bring back that fighting spirit we had in the streets of Hong Kong during the WTO Ministerial. Together, we can defeat the system and make another world possible.