Add an Event
Newswire
Calendar
Features
Home
Donate
From the Open-Publishing Calendar
From the Open-Publishing Newswire
Indybay Feature
Publish to Newswire
Add an Event
Related Categories: California | Central Valley | Environment & Forest Defense | Government & Elections
Water for fracking: How much does the oil/gas industry use?
by Dan Bacher
Saturday Mar 23rd, 2013 12:47 PM
So what is the actual amount of water now used for fracking for oil and natural gas in Califonia right now – 8 acre feet of water, 6,721 acre feet, or much, much more as fracking opponents contend?

One thing is for certain - oil companies use big quantities of water in their current oil drilling operations in Kern County, although the amount specifically used in fracking operations is hard to pinpoint. A good deal of this water this comes through the State Water Project's California Aqueduct and the Central Valley Water Project's Delta-Mendota Canal, spurring increasing conflicts between local farmers and oil companies over available water. 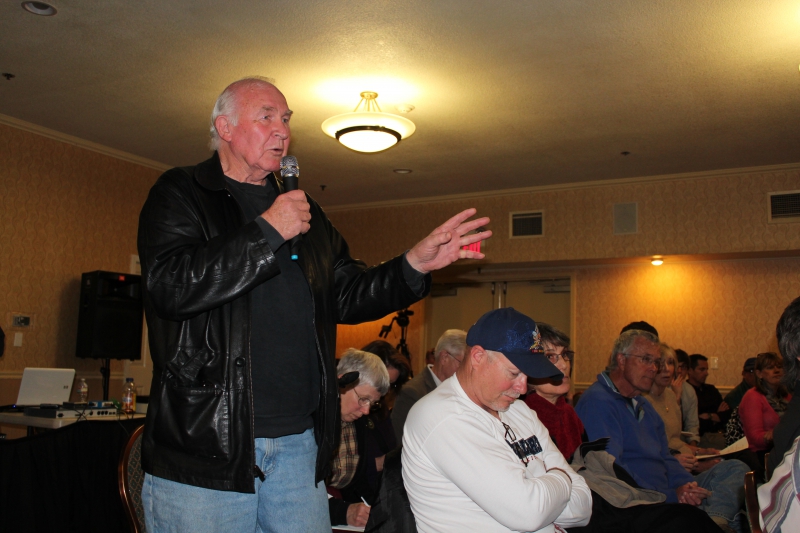 original image (5184x3456)
Water for fracking: How much does the oil/gas industry use?

However, in a post on the Bay Delta Conservation Plan (BDCP) website the same day, Richard Stapler, Deputy Secretary for Communications of the California Natural Resources Agency, claimed that only 8 acre feet of water is used every year for hydraulic fracturing in California, in an apparent attempt to minimize the amount of water employed for fracking. (http://baydeltaconservationplan.com/blog/blog/13-03-20/Oil_Water.aspx_)

Fishermen, environmentalists, tribal leaders, family farmers and others opponents of the peripheral tunnels fear that the water diverted from the Sacramento-San Joaquin Delta would be used for hydraulic fracturing in Monterey Shale deposits on the west side of the San Joaquin Valley and in coastal areas.

"With apologies to all the sci-fi fans out there, I have to say I deplore the term 'fracking,'" said Stapler. "It's shorthand for an important process called hydraulic fracturing used in the oil extraction business. The process uses water and a small mix of chemicals to fracture and prop open rock formations thousands of feet under the earth's surface to allow for pumping of crude oil."

"So, it's helpful to know that only 8 acre feet of water is used every year in California for hydraulic fracturing. That's enough water for 32 average families for a year. For additional context, the average amount of water we move through the Delta in a typical year is 4.8 million acre feet (though it varies by year)," he stated.

He cited information from the Department of Conservation’s Division of Oil, Gas, & Geothermal Resources as the justification for his figure.

“As for the total amount used, the best source of information currently is the voluntary reporting to the FracFocus site,” according to Stapler. “The site lists 728 hydraulically fractured wells in California. There's a PDF document attached to each of those wells that includes, among other things, the amount of water used to fracture the well.”

Stapler contrasted the amount of water he said is used by fracking operations in the eastern U.S. and California.

“In the eastern U.S., hydraulic fracturing tends to use significantly more water than in California,” Stapler contended. “That's because the most efficient way to get at natural gas trapped in shale is to drill horizontally for thousands of feet and then fracture stimulate the reservoir along the horizontal section using up to 13 million gallons of water. At least at present, most California wells are drilled vertically, with any fracture interval being much smaller.”

Yet in a footnote at the bottom, Stapler states, “For reference, you could multiply the average of 87,375 gallons with every injection well in the state (about 25,000) and still come up with a relatively small amount of water -- 6,721 acre feet, or water for about 27,000 average families for a year.”

Stapler hasn’t yet responded to my email inquiry over the enormous discrepancy in the water he claims is used for fracking per year– 8 acre feet of water in one section of his article and 6,721 acre feet in another.

Fracking opponents say amount of water used is much higher

Lynn Krug from the Stop Fracking California facebook page (http://www.facebook.com/StopFrackingCalifornia) and other fracking opponents say the water used by companies to extract natural gas and oil through fracking in California is much greater than Stapler or the oil industry claim it is.

“Each individual drilling of a well can use 1,000,000 to 5,000,000 gallons of water,” she said. “Each platform can have multiple drilled ‘wells’ in a 4 mile diameter, a 2 mile radius from the well platform. Each well can be fracked multiple times.”

She said the use and allocation of water is “dire to California,” given the shortages now and in a potential drought, for fresh water to Delta aquatic life, agriculture, drinking water and fire protection.

She also pointed out that not only will fracking operations need lots of water, but they will dispose of toxic fluid waste, furthering endangering water supplies and the environment.

“The disposal of the toxic fluid waste is a further endangerment to contamination of existing fresh water, human safety, and agriculture,” Krug stated. “Fracking is an insecure process as repeatedly proven by the national reporting of failures. California's own drilling history is lax by the failure to monitor these sites and makes it appear that the process is safe - it is not.”

Burt Wilson, a staunch opponent of the Delta tunnels and fracking, responded to Stapler's blog post, “There is no way to prove what Stapler is talking about, but in many cases the wells can't get the water yet! That's why the need for the tunnels! With the tunnels in, they can frack 'til their heart's content."

Describing the information voluntarily provided by the oil industry on water for fracking as “propaganda,” Wilson stated, “It is misleading as hell. I asked Occidental Oil--who plan 154 to create fracking jobs soon--where they get their water and they refused to tell me.”

“Stapler wants a person to believe that the ‘new’ fracking water is already being used, but it's not. Fresh water is still the staple and the tunnels will certainly supply it when the real fracking kicks in after the tunnels are built--if ever,” said Wilson.

So what is the actual amount of water now used for fracking in Califonia right now – 8 acre feet of water, 6,721 acre feet, or much, much more as fracking opponents contend?

One thing is for certain - oil companies use big quantities of water in their current oil drilling operations in Kern County, although the amount specifically used in fracking operations is hard to pinpoint. Much of this water this comes through the State Water Project's California Aqueduct and the Central Valley Water Project's Delta-Mendota Canal, spurring increasing conflicts between local farmers and oil companies over available water.

"What’s resoundingly clear, however, is that it takes more water than ever just to sustain Kern County’s ebbing oil production," according to Jeremy Miller's 2011 investigative piece, "The Colonization of Kern County," in Orion Magazine (http://www.orionmagazine.org/index.php/articles/article/6047/)

Miller's investigation has yielded some alarming data on how much water has been used by the oil industry in Kern County and statewide since the 1960s.

"In the time since steamflooding was pioneered here in the fields of Kern County in the 1960s, oil companies statewide have pumped roughly 2.8 trillion gallons of fresh water—or, in the parlance of agriculture, nearly 9 million acre-feet—underground in pursuit of the region’s tarry oil," said Miller. "Essentially, enough water has been injected into the oil fields here over the last forty years to create a lake one foot deep covering more than thirteen thousand square miles—nearly twice the surface area of Lake Ontario."

Miller also said he was surprised to learn from local water authorities that a "good deal of the water for steamflooding comes from the same source that supplies the region’s farms: the Central Valley and State Water Projects," although he said exact information on the amount of water used from the projects for oil drilling operations is not required by the state or federal governments.

"Oil companies call the fresh water they buy from outside sources 'makeup water," wrote Miller. "It’s difficult to gauge exactly how much of this makeup water comes from the State Water Project, since oil companies are not required to disclose the sources of their water, and no state agency tracks the fate of State Water Project water after it has been sent down the pipe."

As more information becomes available, I will report on the water used now, as well as the water that could potentially be used in the future, as the oil industry increases fracking operations in California.

Delta advocates and anti-fracking activists oppose the construction of Governor Jerry Brown's peripheral tunnels because the project will likely lead to the extinction of Central Valley Chinook salmon, Delta smelt, longfin smelt and other fish species, according to agency and independent scientists. They believe that the "dual conveyance" proposed under the Bay Delta Conservation Plan will make an already horrific ecosystem collapse even worse.

Between 2000 and 2011, more than 130,000,000 fish were "salvaged" in the massive state and federal pumps diverting water to corporate agribusiness and southern California, according to a white paper written by Bill Jennings, Executive Director of the California Sportfishing Protection Alliance (CSPA). Considering that recent studies point out that 5 to 10 times more fish are lost than salvaged, the actual number of fish lost could be 1.3 billion or higher. (http://www.restorethedelta.org/wp-content/uploads/2010/06/CSPA-BDCP-Fish-Screens-Revised.pdf)

In other fracking news, three California assembly members have introduced bills to halt hydraulic fracturing in the state and mandate review of the threats the practice poses to the environment and public health.

The legislation was introduced as the oil industry, represented by Catherine Reheis-Boyd, President of the Western States Petroleum Association and the former chair of the Marine Life Protection Act (MLPA) Initiative Blue Ribbon Task Force to create so-called "marine protected areas" in Southern California, is now pushing for increasing fracking for oil and natural gas in shale deposits in Kern County and coastal areas.

Reflecting growing concern about fracking’s threat to the environment and public health, Richard Bloom (D-Santa Monica), Holly Mitchell (D-Culver City) and Adrin Nazarian (D-East San Fernando Valley) have introduced three pieces of legislation — A.B. 1301, A.B. 1323 and A.B. 649 — that would halt fracking in California until the state determines whether and under what conditions fracking can be done without threatening human health and the environment.

The Center for Biological Diversity, Food & Water Watch, Environment California and Clean Water Action are supporting these bills to halt fracking in California.

"Given that fracking is inherently unsafe and poses a direct threat to our communities, we welcome legislation that provides for a comprehensive statewide moratorium,” said Food & Water Watch Pacific Region Director Kristin Lynch.

“We applaud these legislators for their leadership in working to protect Californians from a dangerous fracking boom that could be devastating for the state,” said Brian Nowicki of the Center for Biological Diversity. “State regulators have shrugged off fracking’s dangers, so it’s up to lawmakers to stop oil companies from polluting our air, contaminating our water and undermining our fight against climate change.”

The groups said fracking has been tied to water and air pollution in other states, and it releases huge quantities of methane, a dangerously potent greenhouse gas. More than 600 wells in at least nine California counties were fracked in 2011 alone, and oil companies are gearing up to frack oil deposits in the Monterey Shale, a geological formation that lies beneath some of the state’s most productive farmland and important wildlife habitat.

For more information, go to: http://www.biologicaldiversity.org/news/press_releases/2013/fracking-03-22-2013.html
Add Your Comments
LATEST COMMENTS ABOUT THIS ARTICLE
Listed below are the latest comments about this post.
These comments are submitted anonymously by website visitors.