Add an Event
Newswire
Calendar
Features
Home
Donate
From the Open-Publishing Calendar
From the Open-Publishing Newswire
Indybay Feature
Publish to Newswire
Add an Event
Related Categories: Santa Cruz Indymedia | Global Justice & Anti-Capitalism | Police State & Prisons
Four Individuals to Stand Trial for 75 River Street Bank Occupation
by Alex Darocy (alex [at] alexdarocy.com)
Tuesday Mar 12th, 2013 5:06 PM
Motions to dismiss trespass and felony vandalism charges against four individuals charged in association with the 75 River Street bank occupation in Santa Cruz were denied by Judge Timothy Volkmann on March 11. The judge set a trial date of May 13 for Gabriella Ripley-Phipps, Franklin Alcantara, Brent Adams, and Cameron Laurendau, but that date will most likely be changed due to a case conflict with one of the defense attorneys. 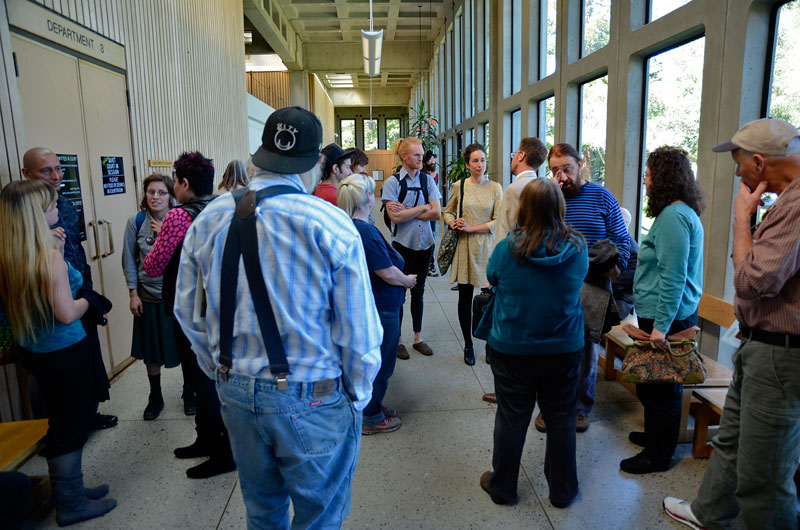 Judge Volkmann agreed with the previous ruling by Judge Burdick in January that there was enough evidence to hold the four for trial on trespass charges, stressing there was a, "relatively low threshold for holding an individual over for trial."

"I don't see direct evidence of vandalism," Volkmann stated, but he agreed with Burdick that the four were still to be held accountable for felony vandalism charges under an aiding and abetting legal theory that maintains the damage to the building was a reasonably foreseeable result of the trespass.

According to representatives of Wells Fargo, who is the leaser of building, nearly $30,000 in damage resulted from the three day occupation of the vacant bank, which began in November of 2011.

At the last hearing in January of this year, Judge Burdick dismissed all trespass and vandalism charges against three others charged in association with the occupation, finding that District Attorney Rebekah Young did not show that any of them had been on the property of the bank after the police had contacted the management of the building. After that, police claim they officially began to issue warnings for people to leave the premises.

Burdick found that the occupation of the bank at 75 River Street appeared to be "spontaneous" after the doorway was opened with a key following an "occupy" march to the building. For those remaining on the property after the so-called police warnings were issued, Burdick found that there were a variety of circumstances why they should be held for the vandalism charges.

Volkmann echoed Burdicks findings, stating that there was "globally recognizable" evidence submitted that showed the vandalism was a reasonably foreseeable outcome of the trespass. The reasons included the size of the crowd and that the building was locked; the amount of time individuals stayed in the building; that demonstrators did not leave immediately; the stacking of furniture and the covering of windows; and the "emotional state" of the crowd.

Before the March 11 hearing, community members placed signs in front of the court house in support of the "Santa Cruz Eleven", and two to three dozen supporters filled the courtroom, hoping the charges against the defendants would be dismissed.

Seven of the eleven originally charged in February of 2012 in association with the 75 River Street occupation have had the charges dismissed against them in previous hearings.

A status hearing will be held in court on April 8 for the four present defendants.


For more information about those charged, see:
http://santacruzeleven.org/


I was one of the eleven who were originally charged in association with the 75 River Street occupation, and all of the charges against me were dismissed in May of 2012. 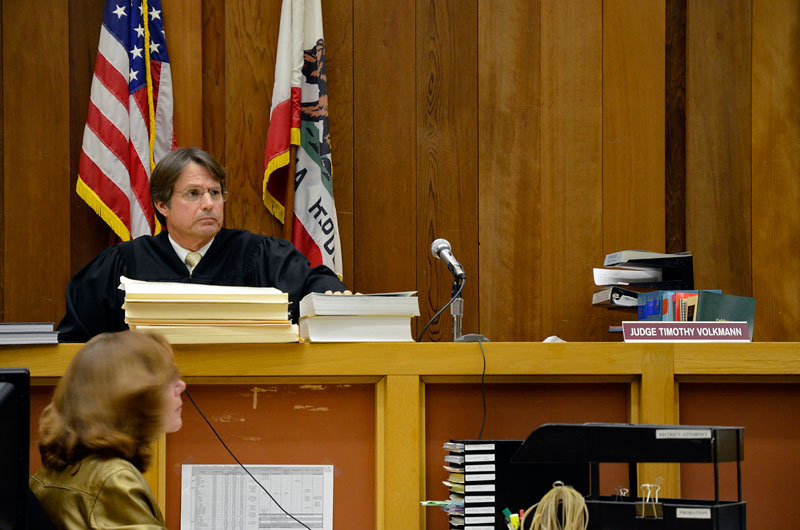 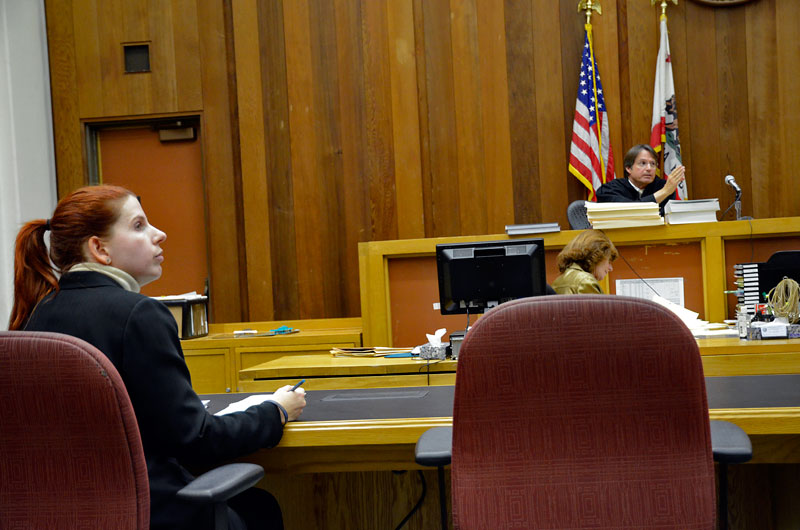 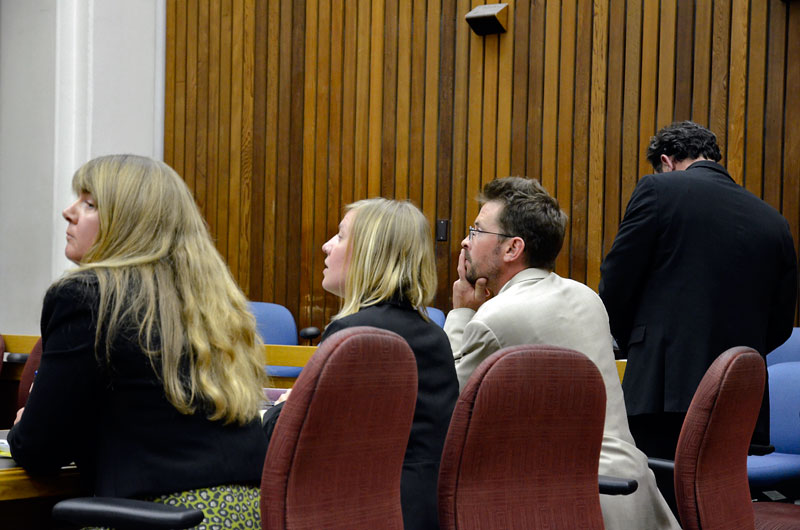 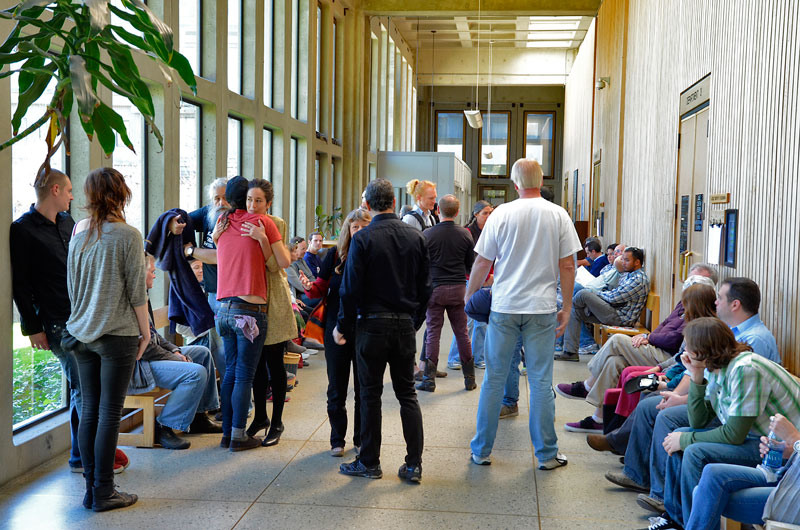 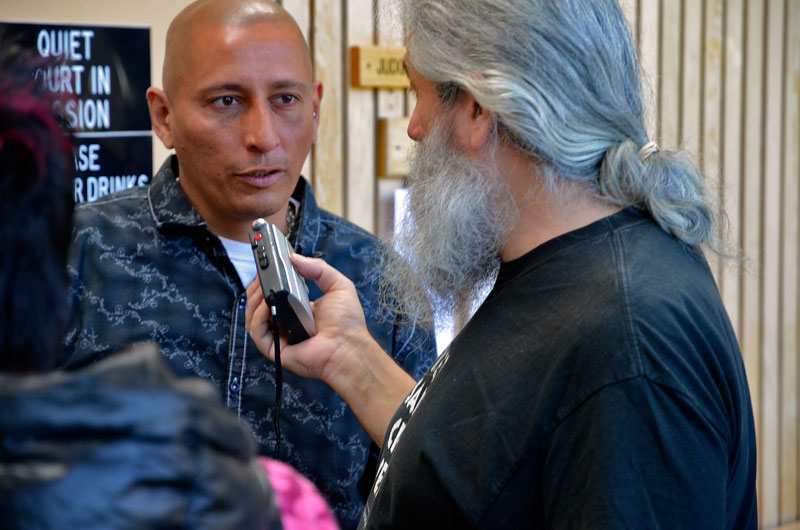 Franklin Alcantara is interviewed by Robert Norse, who had the charges dismissed against him in the same case during a hearing in January.
§
by Alex Darocy Tuesday Mar 12th, 2013 5:06 PM 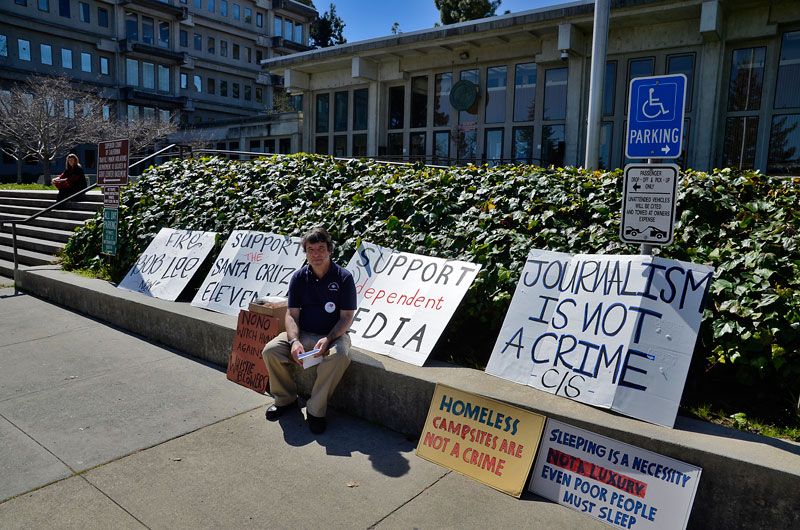 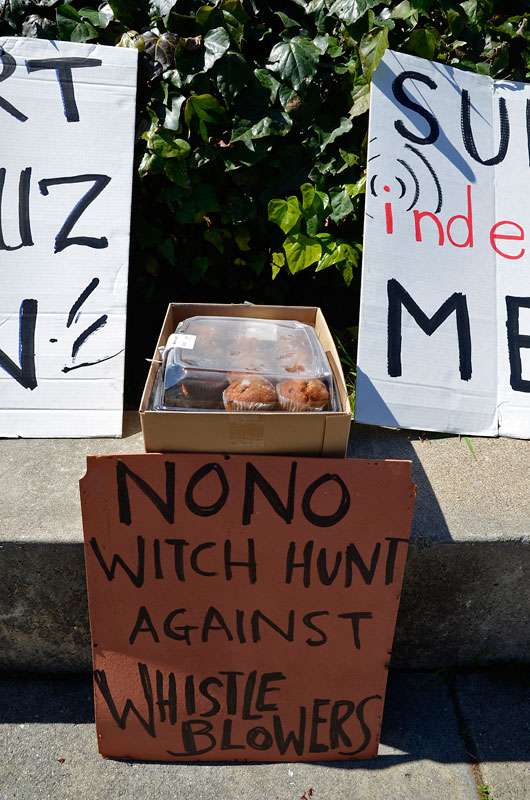 Supporters brought muffins.
Add Your Comments
LATEST COMMENTS ABOUT THIS ARTICLE
Listed below are the latest comments about this post.
These comments are submitted anonymously by website visitors.