Add an Event
Newswire
Calendar
Features
Home
Donate
From the Open-Publishing Calendar
From the Open-Publishing Newswire
Indybay Feature
Publish to Newswire
Add an Event
Related Categories: International | Environment & Forest Defense
ON FUKUSHIMA 2nd ANNIVERSARY, A RAISING OF ANTI-NUCLEAR VOICES
by Brian Covert / Independent Journalist
Tuesday Mar 12th, 2013 4:43 AM
Protesters in several cities across Japan, including in the ancient Japanese capital of Kyoto, marked two years since the 2011 Fukushima nuclear disaster by taking to the streets and urging the government of Japan to give up plans to push ahead with nuclear power. 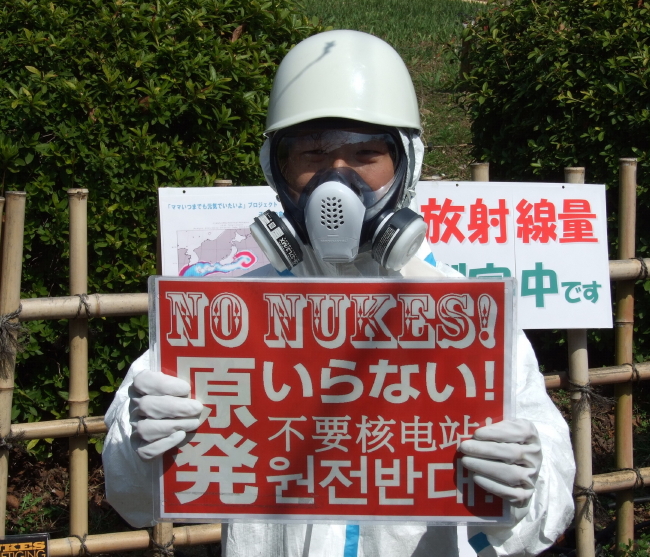 KYOTO, JAPAN — On the eve of the two-year anniversary of the Fukushima nuclear accident in Japan, an estimated 3,000 Japanese citizens here gathered for an anti-nuclear rally and later took to the downtown streets in a public show of opposition to nuclear power.

The “Bye-bye Genpatsu” [Bye-bye nuclear power] rally was held on the afternoon of Saturday, 9 March, at the Maruyama Park amphitheater, a traditional gathering place for concerts and various public rallies in the city. The estimated 3,000 persons who filled the amphitheater — members of various grassroots groups, as well as individuals and families — heard musical performances and guest speakers, all focusing on the sentiment of “no more Fukushimas” and no more nuclear power in Japan.

Kyoto resident Aileen Smith, a longtime campaigner against nuclear power in Japan and head of a local grassroots group called “Green Action,” told the crowd that now was a perfect time to raise their voices against plans by the new Japanese government administration in Tokyo to go ahead with restarting nuclear power generation in the wake of the Fukushima accident two years ago. Of particular concern to Kyoto residents is the Oi Nuclear Power Plant in nearby Fukui Prefecture — the only nuclear power plant operating in Japan at present. “If we can’t stop it, who can?” she said.

Shin Sugok, a human resources consultant, author and media personality, drew a direct connection in her speech between discrimination against minorities and nuclear power in Japan. Many of the temporary workers at nuclear plants nationwide come from the lower classes of Japanese society. Shin is a third-generation ethnic Korean born and raised in Japan, a group that has long suffered severe discrimination in Japanese society, and she has been outspoken on issues of racism in Japan.

The crowd later emptied out of the Maruyama Park amphitheater and into the downtown streets of Kyoto, full of sightseers from all over Japan and overseas during the afternoon peak shopping hours, and made their way in a march to Kyoto City Hall.

A “Sayonara Genpatsu” [Goodbye nuclear power] rally and march was held the next day, Sunday, March 10, in the nearby city of Osaka, where thousands more turned out in the rain to march down the city’s main avenue and to the head office of the Kansai Electric Power Co., the major power company in western Japan.

Tens of thousands of anti-nuclear protesters were also reported in Tokyo over the weekend. 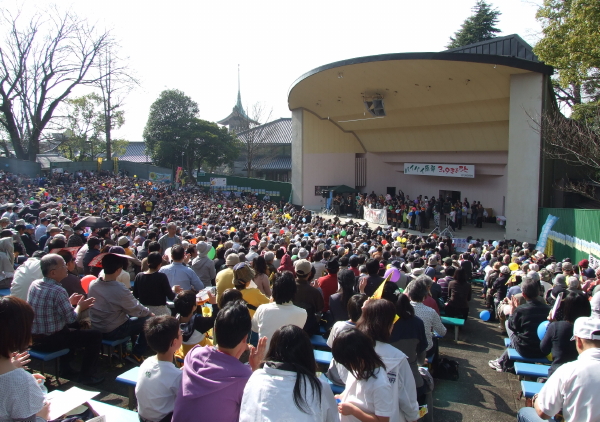 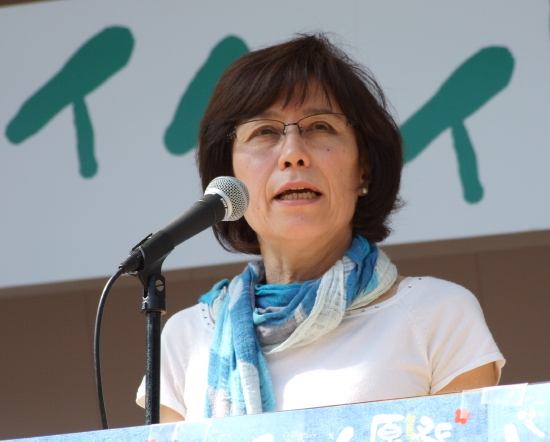 Longtime anti-nuclear activist Aileen Smith told the crowd gathered at the venue that now was the time for citizens to push for an end to nuclear power in Japan and that it could be done.
§Shin Speaks
by Brian Covert / Independent Journalist Tuesday Mar 12th, 2013 4:44 AM 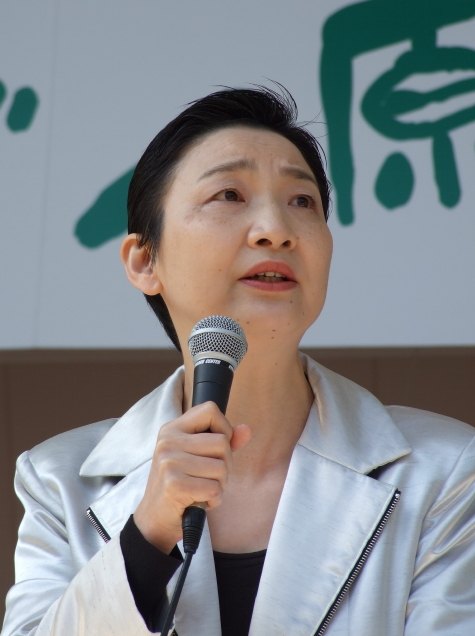 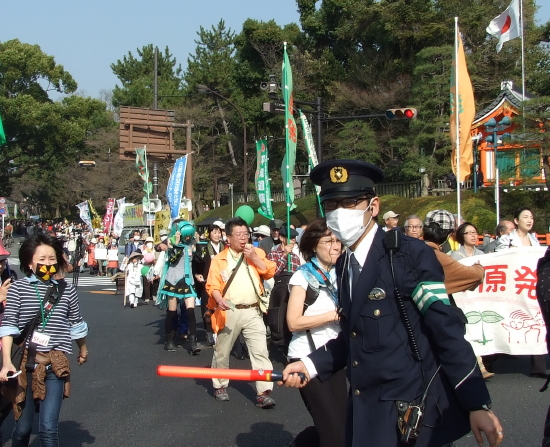 The demonstration begins, amid a police presence, as the crowd of 2,000 to 3,000 marchers leaves Maruyama Park and moves into the downtown streets of Kyoto.
§Chanting Down Nuclear Power
by Brian Covert / Independent Journalist Tuesday Mar 12th, 2013 4:44 AM 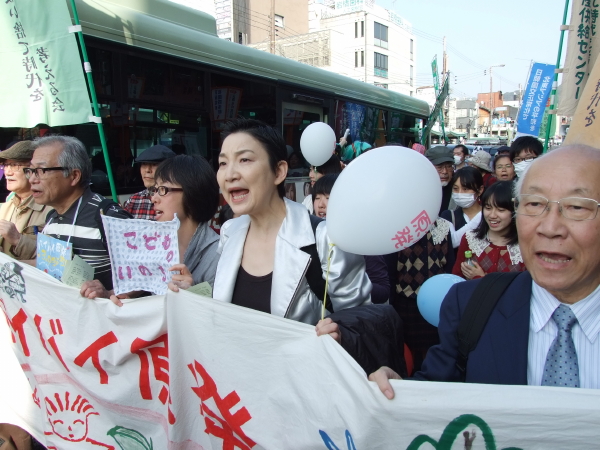 Those at the head of the march, including writer/media personality Shin Sugok (center) join in a chant against nuclear power as the procession heads down busy Shijo-dori avenue in downtown Kyoto.
§Through Downtown
by Brian Covert / Independent Journalist Tuesday Mar 12th, 2013 4:44 AM 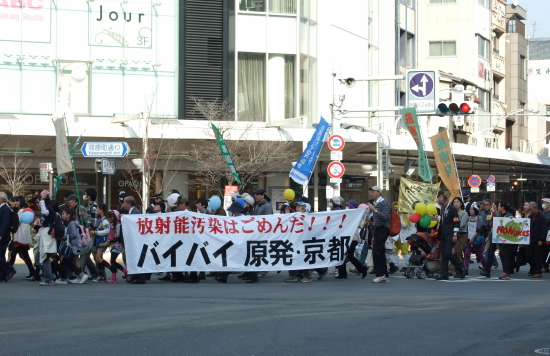 The long line of anti-nuclear marchers makes a turn onto Kawaramachi-dori avenue, one of the main thoroughfares in downtown Kyoto and a prime shopping area. The banner being held by marchers reads in part: “Fed Up with Radioactive Contamination!!!”
§Police Presence
by Brian Covert / Independent Journalist Tuesday Mar 12th, 2013 4:44 AM 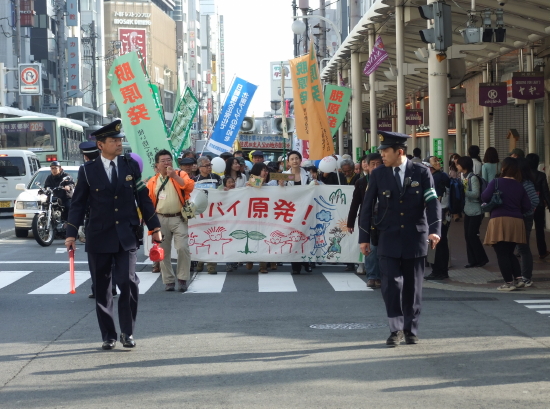 Police officers at the head of the march, as it proceeds adjacent to the busy shopping arcade on Kawaramachi-dori avenue.
§To City Hall (1)
by Brian Covert / Independent Journalist Tuesday Mar 12th, 2013 4:44 AM 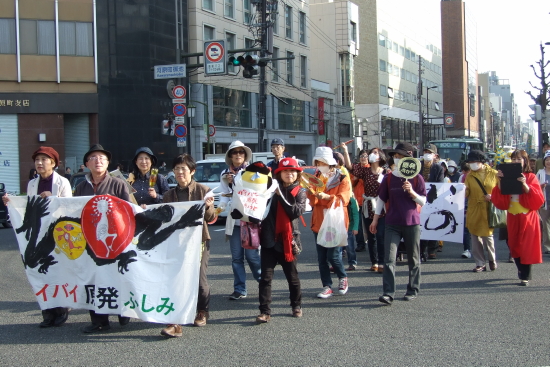 Some of the first wave of marchers to reach the final destination of Kyoto City Hall, an hour or so after the march started.
§To City Hall (2)
by Brian Covert / Independent Journalist Tuesday Mar 12th, 2013 4:44 AM 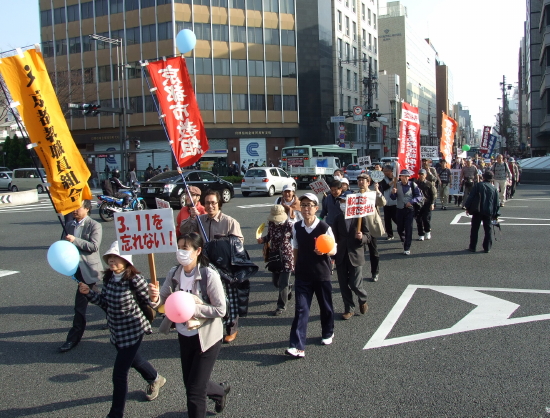 More marchers arriving at Kyoto City Hall, the final stop. The placard in front reads “Don’t Forget 3/11.” March 11, the second anniversary of the Fukushima nuclear power plant accident, was a couple days after this rally and demonstration held in Kyoto.
Add Your Comments
Support Independent Media
We are 100% volunteer and depend on your participation to sustain our efforts!