Add an Event
Newswire
Calendar
Features
Home
Donate
From the Open-Publishing Calendar
From the Open-Publishing Newswire
Indybay Feature
Publish to Newswire
Add an Event
Related Categories: U.S. | Animal Liberation
Texas states Amanda Lollar, Bat World Sanctuary are not bat experts
by For The Love Of Bats
Sunday Mar 10th, 2013 7:19 PM
August 2011 Amanda Lollar of Bat World Sanctuary intended to give a symposium on White Nose Syndrome (WNS) with the Botanical Research Institute of Texas (BRIT). She invited biologists, rehabbers and educators to the symposium. Someone from BRIT questioned TPWD about whether or not Amanda Lollar and Bat World Sanctuary were capable of giving the symposium and if they were properly permitted to bring live bats. TPWD became alarmed and quickly wrote a letter stating Amanda Lollar is not an expert, is not allowed to handle WNS bats, cannot have an assurance colony, has no permit to display bats and is not allowed to let her bats breed. 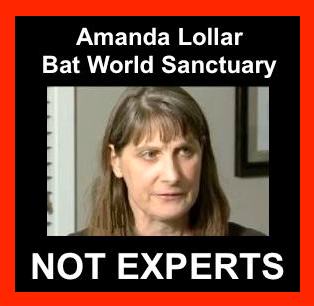 Wendy Connally Program Leader for Texas Parks & Wildlife Department stated in a letter to Amanda Lollar, "Your invitation for the Bat World - BRIT WNS Symposium reached me this morning. There are just a few issues in your announcement I'd like to address. As you may know, US Fish & Wildlife Service (USFWS) and Bat Conservation International have been the primary nodes coordinating WNS information, survey and response protocols, and research on this fast-moving, little understood disease."

Amanda Lollar had been stating that WNS was detected in Oklahoma which is right across the river from Texas. Lollar even told the Health Inspector for Mineral Wells that her bats have WNS. Lollar stated this to garner sympathy and donations to her group. Lollar had told an intern in 2010 that she hoped her bats would get WNS so she could get a lot of money in donations. The main bat in Texas is the Mexican free-tail bat. They do not hibernate. Therefore they cannot get WNS. That did not stop Lollar from sending multiple painful wing punches to the lab for testing. Connally corrected Lollar's false statement by stating "The fungus and its expression as WNS have not been detected in Texas."

Lollar had been stating that only Bat World Sanctuary has a USFWS approved protocol for the treatment and release of WNS bats. From her CV "Co-developed the United States Fish and Wildlife Service protocol for wildlife rehabilitators in response to White Nose Syndrome (WNS) affected bats in the northeastern U.S. Impact: Provided set procedures for the care of debilitated bats suffering from a disease with no known cure." This is of course untrue. Lollar is not allowed to handle WNS bats.

Connally stated "There are currently no USFWS-approved protocols for the treatment and release of WNS-positive (WNS+) bats." As it is bat experts know that WNS affected bats merely need basic supportive care. She went on to state "Bottom line is that we (Texas) would not want to accept WNS+ bats from outside of the state. And, per the Bat World Wildlife Rehabilitation Permit Provision 12, y'all are not authorized to transport from/to other states without coordinating written permission with TPWD. TPWD would not permit WNS+ bats coming across state lines into Texas to any TPWD-permitted rehab facility, nor would be authorize acceptance of any bats from WNS+ states." Connally cited legitimate quarantine and health concerns which Lollar didn't even consider because she lacks an education.

Connally continued "In the event that WNS is detected in Texas, we would currently follow the established USFWS protocols for detection and response. TPWD will preview all bat rehabilitator's permits and may include some level of quarantine holding and transfer to a permitted scientific research facility, but would not include treatment or release until we know more about the disease." These are of course wise public safety issues that need to be considered. Otherwise the WNS bats could spread the disease to other healthy bats.

Connally ended her letter by stating "I'm a bit concerned with this statement: 'The cost of the symposium will be used to fund a new state-of-the-art sanctuary facility for the successful rescue, breeding, maintenance and eventual release of bats affected by WNS.' At this time, TPWD would not provide a permit for any facility to rescue, breed, maintain or especially release bats which test positive for the fungus or WNS until peer reviewed research has shown that the treatment could be affective. Additionally the Bat World Wildlife Rehabilitation Permit Provision 15a prohibits breeding of any of the animals held under the authority of the permit. No captive, rehabbing, or unreleasable bats can be bred at your rehabilitation facility under your permit. All rehab animals at any facility should be separated by sex to prevent breeding." Connally obviously did not know that Lollar had been bragging that she has the "only captive breeding colony of insectivorous bats" "with over nine generations being born in the sanctuary." Lollar even posts the genealogy of her bats even though she is not allowed to let them breed. Lollar had her pro-bono attorney Randy Turner of Bailey & Galyen tell a judge in a Texas court room that she has over 350 captive unreleasable bats, even though she doesn't have a permit for any unreleasable bats.

The invitation stated that live bats from Bat World would be used in the symposium. Connally stated "The Bat World Wildlife Rehabilitation Permit allows (Provision 10) limited permanent retention of non-releasable wildlife for approved educational, fostering, or socialization purposes, or for transfer to zoological, scientific, or educational permit holders. Requests must be made in writing to the department. Using live bats during the symposium is fine if they are not bats currently under rehabilitative care and if they've been approved by TPWD to retain as non-releasable for education. I noticed on some of your past annual reports that you indicated several bats in some years that were transferred to captive colony; however, I'm unaware of any case-by-case approvals in our files which would authorize you to hold any non-releasable bats for educational purpose and y'all do not have an education display permit for that purpose." Connally did not know that Bat World Sanctuary's USDA exhibit permit was cancelled March 2012 even though the invitation stated they still had their USDA permit. Needless to say BRIT backed out of the symposium. Lollar tried to argue to TPWD that an over zealous volunteer wrote and sent that invitation but that was not true. She left a copy of it in her website and people had been forwarding it.

Amanda Lollar has been stating for years that Bat World is "the only non-profit organization actively seeking to save bats in danger of extinction from White Nose Syndrome by creating assurance colonies." Not only is Bat World not the ONLY organization trying to help WNS bats but they are not allowed to treat WNS bats. They are not even allowed to have an assurance colony yet on their Facebook page and website they are begging for money to build such a facility. One must wonder what she will do with the donations since she cannot build an assurance colony, cannot have WNS bats and cannot display bats.

In 2011 Bat World Sanctuary and Amanda Lollar were investigated by USDA, TPWD, the Health Dept of Texas and the City of Mineral Wells. USDA cancelled her permit in 2012. TPWD sent her a stern letter about obeying her permit restrictions. Health Dept gave her a long laundry list of rules that she must follow to reduce the risk of rabies. After the investigation Lollar requested that TPWD write a statement saying "Texas Parks and Wildlife investigated Amanda Lollar and Bat World Sanctuary, saw no evidence to back up the accusations, and found the complaints to be without merit." TPWD wrote back that they would only say "according to one of our game wardens, there is no current active investigation." They stated in another letter that they had no time to fully investigate. Of course that didn't stop Lollar from stating that TPWD, Health Dept and USDA cleared her of all wrong doing. They most certainly did not.

The City of Minerals and her neighbors have made complaints about Lollar for the last 20 years about the smell, guano on the streets and rabid bats. Finally Lollar stated to the City at the end of 2011 that she was fed up with all the complaints so she was selling the building and leaving town. January 2012 Lollar sold the wild sanctuary building at 115 NE 1st St. She built a cement block structure supposedly outside of town. She's been trapping and relocating the bats to the building who immediately fly back to town. Because Lollar lacks any formidable education she did not realize that crevice bats do not want to live in a new cold odd-smelly building with no crevices away from food sources. It appears the bats have finally spoken. Amanda Lollar and Bat World Sanctuary are not bat experts.