What followed was 13 months of harassment and tens of thousands of dollars of public expense in endless court hearings. Several of the 11 lost their jobs; one attempted suicide, and one has her housing ripped from under her.

D.A. Lee's prosecuting attorney Rebekah Young repeatedly withheld evidence & refused to obey court orders. In an unusual and unprecedented sanction, Judge Paul Burdick fined her $500. In an exchange caught on video at http://occupysantacruz.org/2012/07/19/santa-cruz-da-befriends-the-usual-suspects/ , Lee publicly told his victims “if you will pay [Wells Fargo] $23,000, it would be a different ball game”. Apparently acting as the bank's bill collector, Lee wants inpoverished and innocent defendants to pay for the inflated clean-up costs at the still-vacant structure. There was some graffiti and some damaged furniture done by parties unknown. SCPD took no action to pinpoint actual vandals, instead using the protest as an opportunity to frame well-known long-time police critics & media at the protest.

No evidence links any of the four with any vandalism. They face a possible four years in prison if convicted under a tortured “if they were there, they aided and abetted” theory. Meanwhile, Wells Fargo continues to destroy families, confiscate homes, and pass on obscene bonuses to its top brass.

Support Activists Under Attack in Santa Cruz!
Drop the Charges: End the Witchhunt!
Sign the petition at http://www.santacruzeleven.org 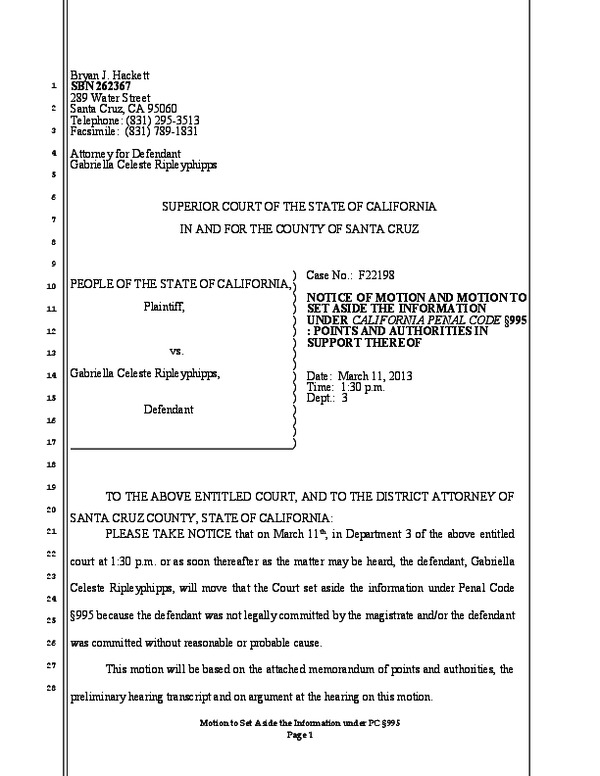 Download PDF (188.1KB)
The motion is also publicly viewable at the County Building at the Clerk's Office. Attorneys for Brent Adams and Cameron Laurendau filed separate motions. The attorney for Angel Alcantara joined in the motions, but didn't bother to write one of his own.
§Response to the District Attorney's Motion Contesting the Motion to Dismiss
by Bryan Hackett (posted by Norse) Thursday Mar 7th, 2013 9:50 PM 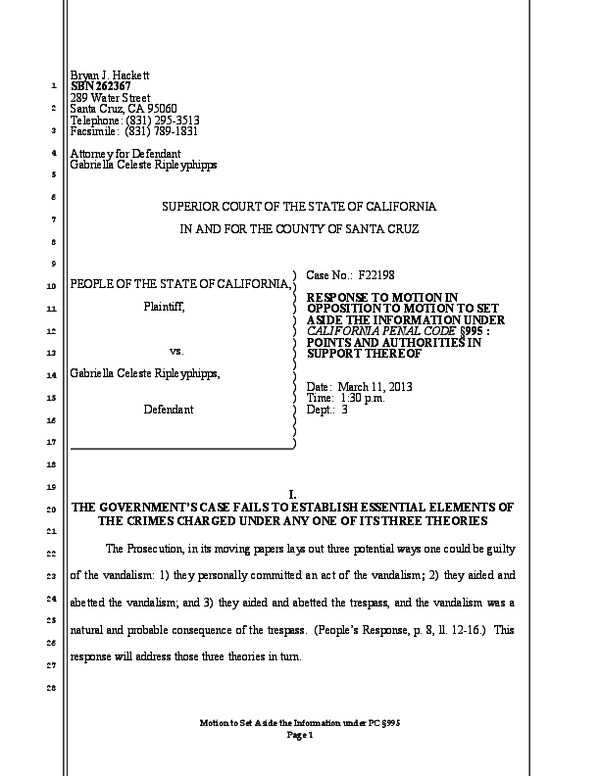 Download PDF (148.3KB)
D.A. Rebekah Young filed a motion I have not yet been able to secure a copy of. Her motion responded to Hackett's initial 995 motion to dismiss all charges against Gabriella. The brief above is Hackett's response to Young's motion.
§Rebekah Young's Response to the Three 995 Motions
by Rebekah Young (posted by Norse) Friday Mar 8th, 2013 6:19 PM 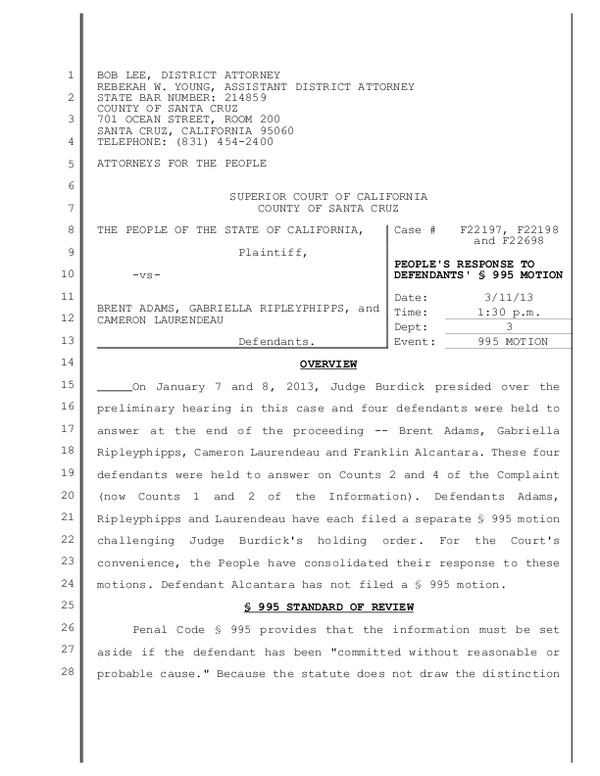 Download PDF (73.1KB)
Why the mendacious, incompetent, and contemptuous assistant D.A. Rebekah Young should be allowed to continue on this case is the real question that needs answering. Just as Wells Fargo is the real criminal that needs prosecuting.

I've only had a brief look at the motions. Still...

Young misrepresents the testimony describing Gabriella as a "leader" and "spokesperson".

In fact, Young substitutes the word "possible consequence" in her argument--which, may misstate the law.

In point of fact didn't the testimony show that Gabriella was an intermediary who, at the request of the SCPD, facilitated a peaceful exit from the building? 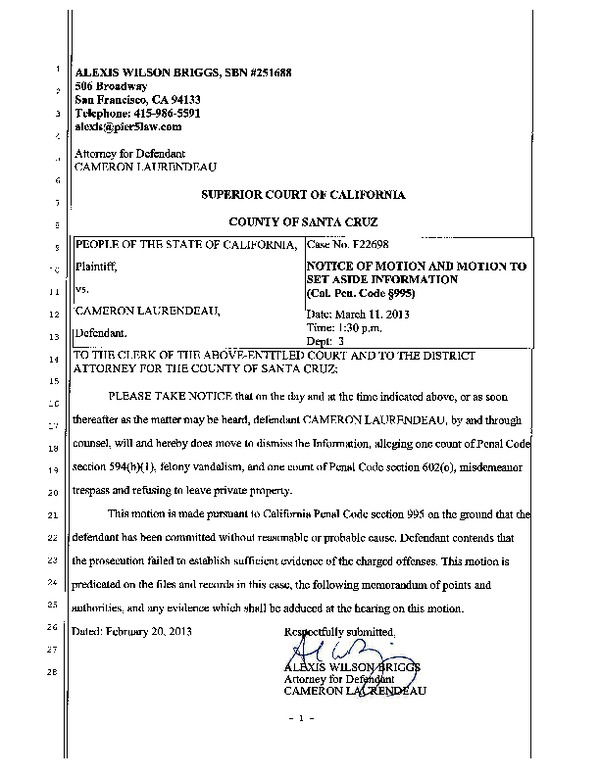 Download PDF (148.2KB)
Alexis Briggs, who arguably was the most high-profile in challenging the bogus Young/Lee prosecution as well as filing the most motions, supplied most of the motions for this story (which are public documents).
§Response to Rebekah Young's Defense of Her Persecution/Prosecution
by Alexis Briggs (posted by Norse) Saturday Mar 9th, 2013 11:35 AM 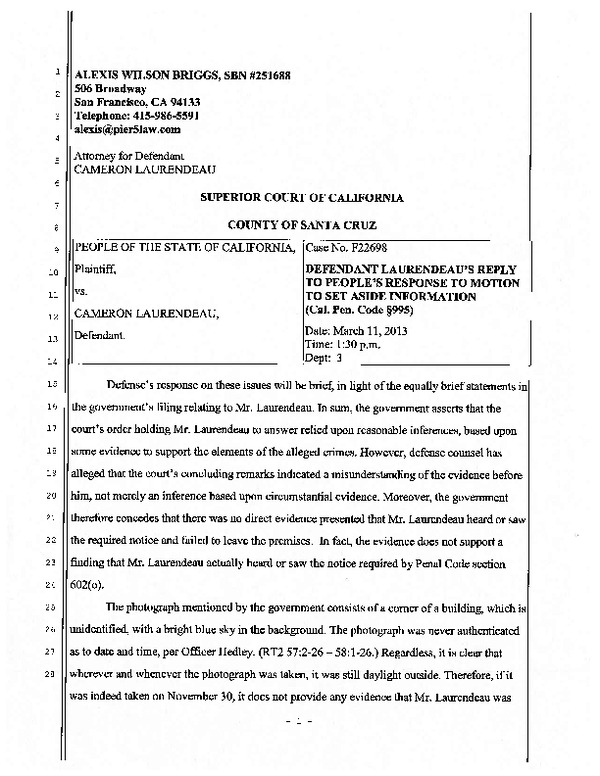 Download PDF (104.0KB)
Rebekah Young's Motion was the same for all four defendants and can be found in the main story above. This is Briggs's response on behalf of Cameron Laurendeau.
§995 Motion to Dismiss for Brent Adams
by Lisa McCamey (posted by Norse) Saturday Mar 9th, 2013 11:38 AM 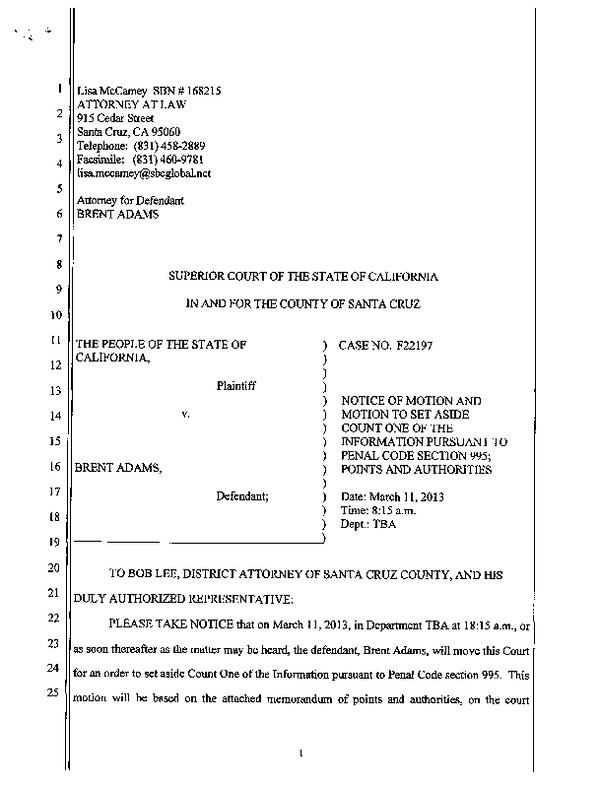 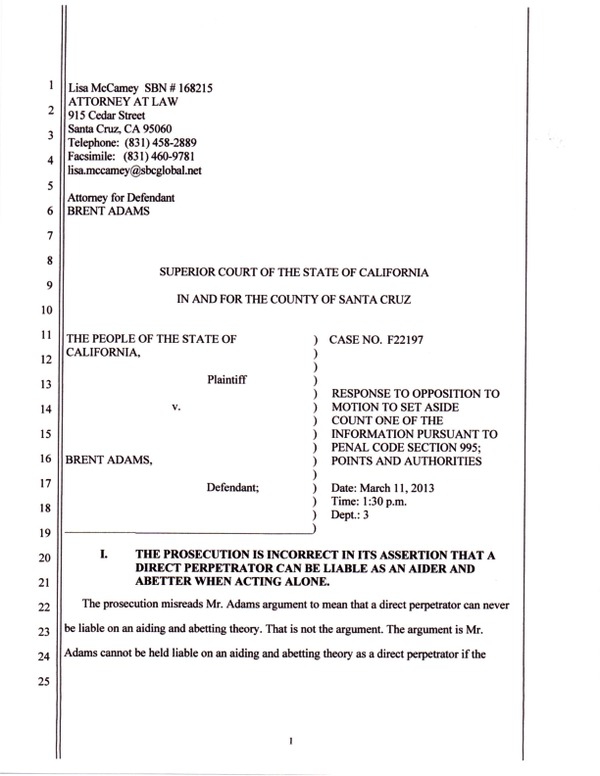 Download PDF (4.1MB)
Only 3 of the 4 attorneys filed 995 Motions. Attorney Jesse Rubin, who has had little communication with his client out of court, declined to do so, other than joining in with the arguments of the three other attorneys. Rubin argues vigorously in court, but apparently doesn't have much use for input or dialogue with his clients outside of court. Or such is my impression. Angel might disagree.
§Transcript of the Preliminay Hearing On-Line in Prior Indymedia Posting
by Robert Norse Tuesday Mar 12th, 2013 11:00 AM
To follow the references in the defense and prosecution documents, go to "What Your $100,000+ is paying for: Transcript of the Santa Cruz 11 Preliminary Hearing 1-7" at http://www.indybay.org/newsitems/2013/02/06/18731489.php .

The Sentinel's typical coverage of the 995 hearing, which resulted in the rubberstamping of all of the charges against the 4 defendants, can be found at http://www.santacruzsentinel.com/localnews/ci_22767426/judge-timothy-volkmann-denies-dismissal-final-four-river?source=rss .