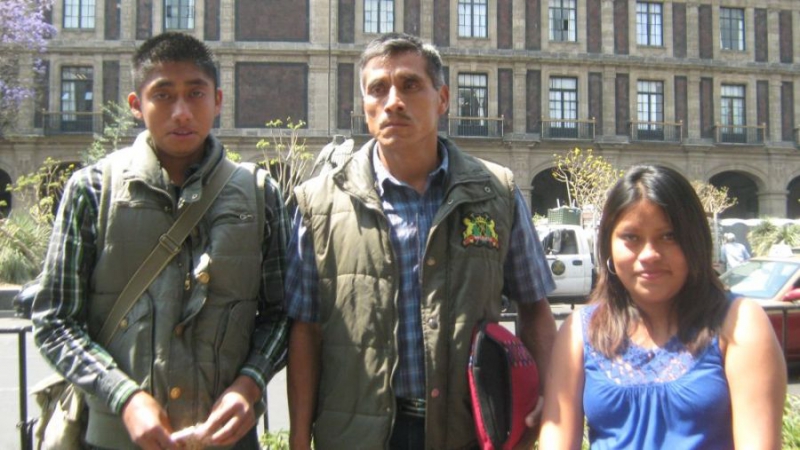 original image (900x507)
On March 6, 2013, the members of the First Courtroom of the National Supreme Court of Justice (SCJN) in Mexico decided that twelve years of injustice aren’t enough for Alberto Patishtán Gómez. When the judges had the opportunity to assert competent jurisdiction for doing a thorough study that would have shown the innocence of the Tzotzil schoolteacher, they declared themselves incompetent. Incompetent? How true, how true. Incompetent in doing their job. Incompetent in seeing that justice is done.

The parasites Alfredo Gutiérrez Ortiz Mena, José Ramón Cossío and Jorge Pardo Rebolledo, who receive salaries of approximately 4 million Mexican pesos a year (without counting benefits, Christmas bonuses, and additional funds) aren’t interested in reviewing the case of an honorable schoolteacher sentenced to 60 years in prison for the heinous crime of struggling for social justice among poor, indigenous people. A hearing had been announced for the purpose of discussing the proposal drawn up by Judge Olga Sánchez Cordero and supported by Judge Arturo Zaldívar. But no. In less than ten curt, bureaucratic words about the proposal being unfounded, the three judges blocked the measure. They didn’t even feel it was necessary to give their reasons. So blatant was the arrogance of power.

Alberto Patishtán’s family members, on the other hand, had traveled all the way from Chiapas with high hopes that justice would at last be done. But their optimism turned into consternation, outrage and sadness when they heard what the judges said.

After leaving the courtroom, Gabriela Patishtán, Alberto’s daughter, said in an interview: “We are outraged and disappointed about the judges’ response. It seems that for being an indigenous man with no influence, my dad was denied his freedom even though he’s innocent. But the French woman Florence Cassez, who is backed by influential people, was released even though she’s guilty. There’s no justice in our country. There’s no equality.”

Hector Patishtán, Alberto’s son, added: “We’ve lost our faith in justice in Mexico. Once again discrimination against indigenous people is obvious. And if the Supreme Court had recognized my father’s innocence, it would have helped thousands of other innocent people who have spent many years in prison, too.”

Cecilia Santiago, who came to Mexico City with the family, said: “We’re outraged. This shows just how racist justice is in Mexico. We’re sad and concerned… They’ve turned their back on us.”
During the almost two-hour wait for the judges to arrive, Gaby, Hector and their uncle Faustino López Ruiz talked about their hopes and expectations outside the courtroom. “For the first time since my Dad lost his appeal based on constitutional violations in 2003, we have a new legal strategy that should oblige them to order his release,” says Gaby. “I feel kind of nervous because there’s a lot at stake today,” adds Hector. Will they have to present new exculpatory evidence? The lawyers Leonel and Sandino Rivera explain that they’ve already presented a document of jurisprudence that compels the annulment of evidence obtained through violations of due process, such as the false testimonies of officers who swore they were in two different places at the same time.

Family members also spoke about the life and struggle of Alberto Patishtán in his community and in the prisons of Chiapas. “We’re from the town of El Bosque in the mountains of Chiapas,” said Faustino López Ruiz. “From the very first moment when they arrested Albert on June 19, 2000, up until now, he has always had the support of the community. Back then, we were all sick and tired of the injustice and repression that existed. Alberto said that there was no reason for us to put up with that, that we had to get organized. The authorities know he had nothing to do with the ambush (in which seven policemen were killed]. He was somewhere else and they know it. In El Bosque we hold Alberto in high regard. We care about him. We miss him. And we want him back with us.”

Gaby notes that her father was working honorably as an elementary schoolteacher and was also helping people get organized because they had suffered a lot. “The municipal president was really corrupt. The elections were coming and he wanted to stay in power. Unfortunately, just when my dad had helped people document all the abuses against his administration, the ambush took place. The president’s son was shot, and they put the blame on my dad. His case is political. He’s innocent.”

Alberto Patishtán’s family members mention some of the violations of his rights that have occurred, such as his arrest without a warrant, his torture, and the fact that he was forced to make a statement without a lawyer being present. He didn’t have a translator either. In spite of the evidence in his favor, he was unjustly charged with federal offenses of homicide and aggravated assault, damages, and possession of firearms for the exclusive use of the Army. Furthermore, during all these years that Alberto has been in prison, he was denied adequate medical diagnoses that would have detected a brain tumor which gave him terrible headaches and almost left him blind.

Hector and Gaby say their father is known in El Bosque and in the prisons of Chiapas as a man who always looks out for poor people and helps them organize to obtain justice and human rights. Without him, there would have been no prisoner organizations such as La Voz del Amate in CERESO # 14 in Cintalapa, or Solidarios con La Voz del Amate in CERESO #5 near San Cristóbal de las Casas. These groups have held several hunger strikes that have resulted in the release of hundreds of indigenous people. Patishtán’s son and daughter say that on October 10, 2011, their father was secretly transferred to the Guasave prison in Sinaloa, 2,000 kilometers away from home in reprisal for starting a hunger strike.

When Albert was arrested in the year 2000, Gaby was only nine years old and Hector was three. They say their family has suffered because of not having him at home. They’ve been able to visit him in the prisons of Chiapas, but “it’s not the same.” And when they transferred him to Guasave, it was even more difficult. “The authorities put all kinds of obstacles in our way,” says Gaby. “For example, we had to give them not just one, but five birth certificates. There was a lot of humiliation and long hours of waiting to see him for just a few minutes.” Héctor adds that he traveled from Chiapas to Sinaloa twice without being able to see his father even once. He says the new ultra maximum security prison where Alberto was held is “a torture center like Guantánamo.” He says the prisoners are isolated there and that Alberto was only able to go out into the yard once a week.

“Even so,” says Gaby, “my dad always has a positive attitude and helps other prisoners.” How has he been able to organize so many people inside the prisons? “It’s his faith,” says Hector. “He’s a very spiritual man.” “Yes,” says Gaby, “and he’s firmly committed to struggling. He never gives up.”

What will happen now? Gaby says that “independently of what just happened, God is going to open other doors for us, and we’re going to keep right on struggling to win freedom for my dad.”
Attorney Leonel Rivera explains that “The First Courtroom let an opportunity go by to establish significant precedents, and this leaves us confused and outraged…We are filled with consternation over the votes of judges Pardo Rebolledo, Cossío Díaz and Ortiz Mena. But of course there are still possibilities that Patishtán will gain his freedom. Our arguments are solid. Now the case goes back to the First Collegiate Tribunal in Chiapas, which will have to make a decision. In the event that it decides the case is inadmissible we’ll have to proceed through the Inter-American court system.”

Cecilia Santiago says that “from his cell in CERESO 5 Alberto will surely be calling for actions of resistance and dignity as part of an ongoing struggle to win his freedom because he’s innocent…and also because thousands and thousands of men and women in Mexico are unjustly imprisoned…Alberto’s spiritual and moral strength and leadership will give us the strength to go on.”

Hector says: “Despite the judges’ decision, we haven’t lost the war. Just the opposite is true. This is going to serve as an experience that will give us strength and positive energy. We want to ask that all of you listen to what we have to say. We’re going to need your support in the demonstrations that will surely be taking place in the upcoming days and weeks. It will be a great help for the family.”

PS: Among the many messages, letters, prayers, statements and acts of solidarity that have been forthcoming in Chiapas and the world to demand freedom for Alberto Patishtán, the words of one comrade in particular take on a special meaning. They come from Kuy Kendall, who was seriously wounded when he was shot in the head by the police during the protests against the inauguration of Enrique Peña Nieto last December 1, and is still hospitalized. On November 8, 2011, in a demonstration outside the offices of the Federal Prison Administration of the Ministry of Public Security (SSP) in Mexico City to demand immediate freedom for all those who had been on hunger strike and for the return to Chiapas of Alberto Patishtán, who was still being held incommunicado after his transfer to Guasave, Kuy asked: “Where is he? We want to know where Alberto Patisntán is. Give us an answer. Be minimally democratic. Where are you holding him? That’s the question. We want to know every detail and we’re informing you that we want his immediate freedom. That’s why we’re here. To demand freedom for a comrade who has committed no crime.”