JANE GOODALL: Seeds of Hope: Wisdom and Wonder from the World of Plants 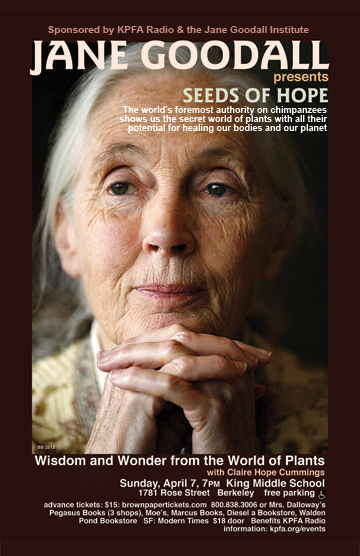 JANE GOODALL (appearing in person)
Seeds of Hope: Wisdom and Wonder From the World of Plants

“steeped in science, Goodall’s feelings for the plants are spiritual—and her concern for their fate in the modern world is forthrightly political.”
—Michael Pollan, author

The world’s foremost authority on chimpanzees shows us the secret world of plants with all their mysteries and potential for healing our bodies as well as
Planet Earth.

In Seeds of Hope renowned scientist Jane Goodall shares her love and profound knowledge of the botanical world, offering us a greater under-standing of the critical role that trees and plants play in our lives. With the same observational skills and engaging voice that deepened our personal feelings for the world of primates, she opens our eyes and hearts to our connection with the astonishing world of plants and trees – as food, as medicine for our bodies and psyches, as helpers in the urgent task of healing the harm we have inflicted on the natural world. Even when she is tackling the sinister forces imperiling the very nature of the plants we depend upon, her stories are visionary, uniquely enlightened, rooted in hope.

Her lifelong passion for botany sprouted in the backyard of her childhood home in England, where she climbed her beech tree and made elderberry wine with her grandmother before establishing her home away from home among the fig and plum trees and chimpanzees in the Gombe forest in Africa. In Seeds of Hope, she introduces us to botanists around the world, places where hope for plants can be found, such as The Millennium Seed Bank, where a billion seeds are stored.

Claire Cummings is an author, journalist, and lawyer. Her book, Uncertain Peril, won an American Book Award. She has over three decades of experience in agriculture, including four years in the Office of General Counsel for the USDA, farming in California and in Vietnam, where she had an organic farm in the Mekong Delta and advised the Ministry of Agriculture.
She has written advisories for Farm Aid, The National Family Farm Coalition, and the Community Alliance with Family Farmers as well as a media guide on agricultural biotechnology. Claire produced and hosted a popular weekly public radio show on food and farming in Northern California for six years, including a news segment called “Eater’s Digest” and reported regularly for KQED television. Claire has served on the board and as general counsel for many environmental groups, including The Elmwood Institute, Food First, and Earth Island Institute.


END_OF_DOCUMENT_TOKEN_TO_BE_REPLACED
Added to the calendar on Mon, Mar 4, 2013 4:36PM
Add Your Comments
Support Independent Media
We are 100% volunteer and depend on your participation to sustain our efforts!