Add an Event
Newswire
Calendar
Features
Home
Donate
From the Open-Publishing Calendar
From the Open-Publishing Newswire
Indybay Feature
Publish to Newswire
Add an Event
Related Categories: International | U.S. | Environment & Forest Defense
Climate change, Arctic amplification, Jet stream causing Extreme weather
by Takver - Climate IMC
Saturday Mar 2nd, 2013 8:28 PM
A series of major extreme weather events in the Northern hemisphere including the heatwave in the United States in 2011, the Russian heatwave of 2010, the Pakistani floods of 2010 have now been attributed to a common physical cause. The scientists suggest in a new scientific study that man-made climate change repeatedly disturbs the patterns of atmospheric flow - the atmospheric Rossby waves of the jet stream - around the globe's Northern hemisphere through a subtle resonance mechanism. 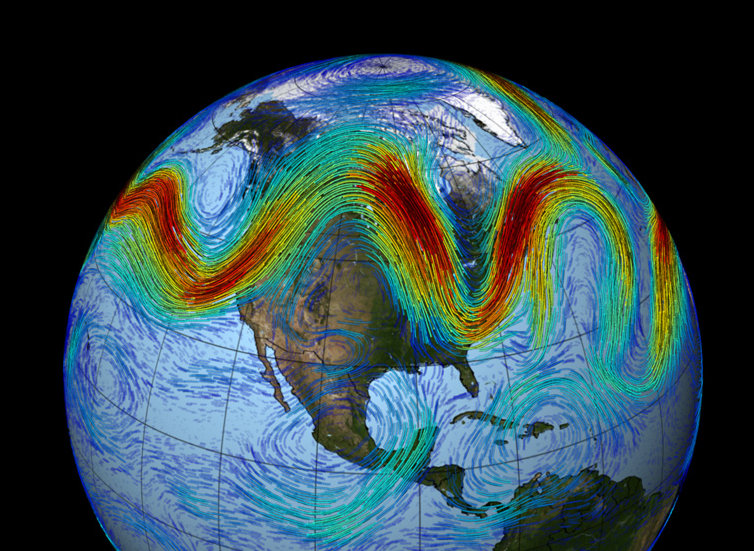 "An important part of the global air motion in the mid-latitudes of the Earth normally takes the form of waves wandering around the planet, oscillating between the tropical and the Arctic regions. So when they swing up, these waves suck warm air from the tropics to Europe, Russia, or the US, and when they swing down, they do the same thing with cold air from the Arctic," explains lead author Vladimir Petoukhov.

"What we found is that during several recent extreme weather events these planetary waves almost freeze in their tracks for weeks. So instead of bringing in cool air after having brought warm air in before, the heat just stays. In fact, we observe a strong amplification of the usually weak, slowly moving component of these waves," says Petoukhov.

Time is a critical factor for Extreme weather events impact due to a slowing down in the Rossby waves. Short periods of two or three days of 30 degrees Celsius heat, or extreme cold are generally not a huge problem, with people prepared and able to cope with short periods of extreme conditions. But when extreme weather conditions stop moving for periods such as twenty or more days at a time causing extreme heatwaves, this is outside the normal experience of populations which can result in extreme heat stress and increased mortality from heat related causes.

Our ecosystems are not used to experiencing events of this duration and neither are our cities designed for events of this magnitude. It can affect energy demand for heating or cooling, disruption to public transport such as the buckling of rail tracks. A recent study revealed that heat stress is reducing the capacity to work in summer months. Increasingly, heat events will surpass physiological limits of human health in coping with temperature extremes.

Lengthy heatwave events will also exacerbate the incidence and intensity of fire weather. Wildfires and bushfires are already extending in seasonal range and in intensity.

Our crops will also be at extreme risk of failure. A study done in 2009 in the USA revealed lengthy periods of high temperature are likely to have a devastating effect on crop yields for corn, soybeans and cotton. The 2010 Russian heatwave devestated crop yields so much that Russia banned grain exports.

The scientists say that anomalous surface temperatures are disturbing the air flows. Studies are showing the Arctic warming at twice the global average, and record loss of sea ice extent in summer is causing the arctic albedo (reflectivity) to change causing additional heating of the Arctic sea and then the atmosphere.

"Some locations along the west coast of Greenland have warmed really strongly by about 2°C to 4°C in summer and as much as 10°C locally in winter - in their average surface air temperatures since 1991," said Edward Hanna of the University of Sheffield, UK. Satellites even detected melting occurring this winter on Greenland.

The warming in the Arctic reduces the temperature difference between the Arctic mid- latitudes. As temperature differentials are a main driver of air flow, this promotes slower circulation patterns. In addition, continents generally warm and cool more readily than the oceans. "These two factors are crucial for the mechanism we detected," says Petoukhov. "They result in an unnatural pattern of the mid-latitude air flow, so that for extended periods the slow synoptic waves get trapped."

The scientists were able to develop equations that described the the wave motions in the extra-tropical atmosphere. The models show the circumstances and conditions when those waves can grind to a halt and get amplified. Using weather data from the US National Centers for Environmental Prediction (NCEP), the model was able to show an increase in the occurrence of these specific atmospheric patterns, which is statistically significant at the 90 percent confidence level. The scientists say that the 32-year period studied in the project provides a good indication of the mechanism involved, yet is too short for definite conclusions.

"Our dynamical analysis helps to explain the increasing number of novel weather extremes. It complements previous research that already linked such phenomena to climate change, but did not yet identify a mechanism behind it," says Hans Joachim Schellnhuber, director of PIK and co-author of the study. "This is quite a breakthrough, even though things are not at all simple - the suggested physical process increases the probability of weather extremes, but additional factors certainly play a role as well, including natural variability."

The theory is not new. A blog post by Stuart Staniford in April 2012 on his Slowing Rossby Waves Leading to Extreme Weather. This post is based upon research by Jennifer A Francis and Stephen J Vavrus on Evidence linking Arctic amplification to extreme weather in mid-latitudes (PDF Full paper) published in Geophysical Research letters in March 2012.

The Potsdam Institute for Climate Impact Reseach scientists appear to have confirmed the conclusions of the Francis and Vavrus paper: Here is what Frances et al said in their abstract:

Two effects are identified that each contribute to a slower eastward progression of Rossby waves in the upper-level flow: 1) weakened zonal winds, and 2) increased wave amplitude. These effects are particularly evident in autumn and winter consistent with sea-ice loss, but are also apparent in summer, possibly related to earlier snow melt on high-latitude land. Slower progression of upper-level waves would cause associated weather patterns in mid-latitudes to be more persistent, which may lead to an increased probability of extreme weather events that result from prolonged conditions, such as drought, flooding, cold spells, and heat waves

You can watch a 2013 presentation on youtube below by Dr Jennifer Frances, a professor at the Institute of Marine and Coastal Sciences at Rutgers University, This video presentation is 40 minutes long made at the Weather and Climate Summit in January 2013. It is well worthwhile watching. Her discussion of the changes to the jetsream starts at about 24 mins in.

Did Arctic Amplification and Jet Stream contribute to Hurricane Sandy?

Dr Frances gets asked alot whether the arctic amplification changing the jet stream affected the course and intensity of Hurricane Sandy. She says:

"Whether Sandy was somehow connected with climate change and sea ice loss because they happen so near each other in time. So I'm sure you've all seena graphic like this one, where it shows a big trough in place over the Mississippi valley with a big blocking high stretching way up over Greenland. And of course we know that this blocking high not only helped steer Sandy into the east coast but it also setup this huge area of very strong pressure gradient between Sandy and this big high which created the large area all along the east coast with strong east winds pounding the east coast and bringing that huge storm surge in."

"So a very unusual situation that Sandy ran into as it came up from the south. What was the Arctic looking like at the same time? ....here is the big blocking high over Greenland extending well over the whole Arctic ocean undoubtfuly connected to the loss of sea ice this last summer. So the question is whether this big block was so important to Sandy's evolution, was somehow strengthened or extended northward or prolonged by the arctic amplification that was clearly in place at the time. And the warmning that I showed you here was extended all over the Arctic."

"Well I think maybe, maybe it could have played a role."

So as the ocean warms, the hurricane seasons may lengthen, so we might see more storms like Sandy appearing later in the season, and the warming oceans may allow these storms to move further northwards; track further northward before they are weakened by cold water. Which is exactly what we saw was the case with Sandy. And perhaps...they will have more opportunities to interact with these very amplified flows that we expect to ocurr more often in the future. Maybe."