Add an Event
Newswire
Calendar
Features
Home
Donate
From the Open-Publishing Calendar
From the Open-Publishing Newswire
Indybay Feature
Publish to Newswire
Add an Event
Related Categories: California | Central Valley | Environment & Forest Defense | Government & Elections | Health, Housing & Public Services
The BDCP's Hidden Agenda: Water for Fracking?
by Dan Bacher
Monday Feb 25th, 2013 6:15 PM
I applaud Burt Wilson for asking the tough questions that need to be asked - and agree that water for fracking could be the "hidden agenda" of the BCDP. It makes sense that the water to be exported from the Delta through the tunnels will be used for a variety of purposes, irrigating drainage impaired land on the west side of the San Joaquin Valley, urban and industrial development in Southern California and increased fracking. 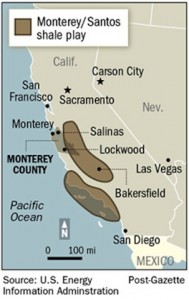 The oil industry, represented by Catherine Reheis-Boyd, President of the Western States Petroleum Association (WSPA) and former Chair of the Marine Life Life Protection Act (MLPA) Initiative Task Force for the South Coast, is pushing for increased "fracking" in California.

Fracking, or hydraulic fracturing, is the controversial, environmentally destructive process of injecting millions of gallons of water, sand and toxic chemicals underground at high pressure in order to release and extract oil or gas, according to Food and Water Watch. (http://www.foodandwaterwatch.org/blog_categories/gas-fracking/factsheet/)

The question is: Where will the industry get the water for fracking on the west side of the San Joaquin Valley and coastal areas, including Monterey County where large Monterey Shale deposits are located?

Burt Wilson, Editor and Publisher of Public Water News Service (bwilson5404 [at] sbcglobal.net), believes he has the answer. He contends that the "hidden agenda" of the Bay Delta Conservation Plan to build twin tunnels is to provide water for the environmentally destructive process of fracking in California.

Wilson definitely knows what he is talking about. He was was on the media staff of the "No on 9" campaign against the peripheral canal in 1982. They won by a 2/3 vote statewide and stopped the canal.

Unfortunately, Governor Arnold Schwarzenegger, at the urging of corporate agribusiness interests, began his campaign build the peripheral canal in 2007. Brown has continued and fast-tracked the Republican governor's plan, opting to go for twin tunnels under the Delta than a single peripheral canal.

"As the Bay Delta Conservation Plan (BDCP) nears completion, some unusual elements of the project have been revealed piecemeal and when they are all put together the total effect is that there is a hidden agenda going on that is far from what has been revealed on the surface," said Wilson.

He cited the example at one public meeting last year when Dr. Jerry Meral, the titular head of the BDCP announced, "We will not take any additional water from the Delta," a meeting that I also covered.

"I could hardly believe what I heard. I jumped up and said, 'Oh good, then we can cancel the twin tunnels.' Everyone laughed, but Dr. Meral's statement continued to stick in my mind. It didn't make sense," recalled Wilson.

Then, a month later Wilson found himself watching a Public Policy Institute of California (PPIC) meeting where northern California water managers were discussing the sale of water transfers and exchanges from one place to the other.

Ms. Letty Belin from the Department of the Interior appeared at the next BDCP public meeting and Wilson asked her, "Do you think Delta water should be sent south to be used for fracking?"

She hesitated a moment and then replied, "I am not going to answer that question at this time" and then broke into a rambling talk about some other subject," according to Wilson.

"I took that to be a 'yes,'" emphasized Wilson.

Wilson said the "hidden scenario" goes like this: "Gov. Brown wants twin tunnels in the Delta. He won't allow a public vote on a water bond, so six water agencies, headed by the Westlands Water District and the Metropolitan Water District have formed a business consortium called the State and Federal Water Contractors Association (SFWCA). These six will be the primary funders of the $14-16 billion revenue stream needed to build and initially operate the twin tunnels."

"Is the SFWCA doing this as a service to the people of California? Of course not. Like all financiers, they expect to make a huge profit. Why else invest $14-billion?" asked Wilson.

Wilson said the SFWCA will "make its money back through handling water transfers from northern California reservoirs, water banks and aquifers--or any way they can get it--to sell at auction the the highest bidder, in this case the oil/gas companies inflated prices to the oil companies who will pay any price to get it."

"Currently in Greely, CO, the water agencies are selling water to farmers for $30 an acre foot while oil companies are paying $3,300.00 an acre foot!" noted Wilson. "Given that water transfers from northern California total about 1,200,000 acre feet a year, the SFWCA, at that rate, would earn almost $4-billion a year! Not a bad return on investment!"

"And here's how they'll do it: let's say some northern California water bank wants to sell 500 acre feet of water," he explained. "That water is then released into the Sacramento River north of the Capital City. At the same time, one or all three of the twin tunnel intakes on the Sacramento River near Hood will suck 500 acre feet out of the river and into the twin tunnels to be pumped south to the SFWCA."

"Note that no 'additional' water has been taken out of the Delta and the transfer is consistent with the State Water Code which mandates that we "reduce reliance on the Delta."

Wilson concluded, "All the parameters of this operation are currently falling into place. The fix is in, in my opinion. By taking the vote for such a project away from the people, Gov. Brown is doing a huge disservice to the People of California."

I applaud Wilson for asking the tough questions that need to be asked - and agree that water for fracking could be the "hidden agenda" of the BCDP. It makes sense that the water to be exported from the Delta through the tunnels will be used for a variety of purposes, irrigating drainage impaired land on the west side of the San Joaquin Valley, urban and industrial development in Southern California and increased fracking.

The drive by the oil and natural gas industry to frack California is highlighted by recent developments that reveal the enormous power of Big Oil in the state.

In a big scandal largely ignored by the mainstream media, Catherine Reheis-Boyd, the President of the Western States Petroleum Association, chaired the Marine Life Protection Act Blue Ribbon Task Force to create so-called "marine protected areas" on the South Coast that went into effect on January 1, 2012. She also served on the task forces to create “marine reserves” on the North Coast, North Central Coast and South Coast.

The current push by the oil industry to expand fracking in California, build the Keystone XL Pipeline and eviscerate environmental laws is only possible because state officials and MLPA Initiative advocates greenwashed the key role Reheis-Boyd and the oil industry played in creating marine protected areas that don’t protect the ocean.

As the oil industry expands its role in California politics and environmental processes, you can bet that they are going to use every avenue they can to get more water for fracking, including taking Delta water through the planned twin tunnels.