Photo of Senator Michael Rubio and Guy Fieri of the Food Network courtesy of Rubio's Office. 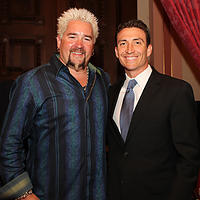 In yet one more example of the revolving door between government and huge corporations that defines politics in California now, State Senator Michael Rubio (D-Bakersfield) on February 22 suddenly announced he is resigning from office in order to take a “government affairs” position at Chevron.

Rubio, who was leading the charge to weaken the landmark California Environmental Quality Act (CEQA) and make it more friendly to corporations, said he resigned in order to spend more time with his family.

“I have realized that my current professional path has left little opportunity to be home for those who are most important to me, which is why I am making a change,” said Rubio. “Effective today, I am stepping away from my current position and resigning from the California State Senate.”

“As for what’s next, I have officially accepted a position with Chevron Corporation to serve as manager of California government affairs. I look forward to transitioning into a career that will allow me to seize a generational opportunity and work for a respected California company with deep roots in Kern County near the very oil fields where I was born, “ he said.

The surprise departure of Rubio leaves a third vacancy in the 40-person State Senate.

"In my absence, Senate staff will remain in the district and Capitol offices to respond to the needs of residents of the 16th State Senate District--as they have always done," said Rubio.

Stop Fooling California (http://www.stopfoolingca.org), an online and social media public education and awareness campaign that highlights oil companies’ efforts to mislead and confuse Californians, responded to the Rubio’s announcement by saying, “It seems that Big Oil is attempting to buy ever more influence in Sacramento."

“For too long Chevron and Big Oil have been trying to buy influence over our elected officials so they can keep gouging consumers, maintaining their oil monopoly, and polluting with impunity,” said Martha Dina Argüello, Executive Director of Physicians for Social Responsibility - Los Angeles (PSR-LA).

Oil and gas companies spend more than $100 million a year to buy access to lawmakers in Washington and Sacramento, according to the group. The Western States Petroleum Association (WSPA), the most powerful corporate lobby in Sacramento, alone has spent more than $16 million lobbying in Sacramento since 2009.

“Given that Sen. Rubio comes from a place that suffers so much from the pollution caused by oil, I can only hope that he will help lead Chevron in a new direction, “said Kathryn Phillips, Director, Sierra Club California. “Perhaps he can persuade his new employer to stop working to tear apart the very regulations that the people in his district support because they will finally deliver on the promise of clean air and consumer choice.”

The announcement of a legislator leaving to work for an oil company takes place just two months after alleged “marine protected areas,” overseen by the President of the Western States Petroleum Association, a coastal real estate developer, a marina corporation executive and other corporate interests, went into effect on California’s North Coast.

In a big scandal largely ignored by the mainstream media, Catherine Reheis-Boyd, the President of the Western States Petroleum Association, chaired the Marine Life Protection Act Blue Ribbon Task Force to create so-called marine protected areas on the South Coast that went into effect on January 1, 2012. She also served on the task forces to create “marine reserves” on the North Coast, North Central Coast and South Coast.

The current push by the oil industry to expand fracking in California, build the Keystone XL Pipeline and eviscerate environmental laws is only possible because state officials and MLPA Initiative advocates greenwashed the key role Reheis-Boyd and the oil industry played in creating marine protected areas that don’t protect the ocean.

Reheis-Boyd apparently used her role as a state marine "protection" official to increase her influence in California politics to the point where the Western States Petroleum Association has become the most powerful corporate lobby in California. (http://www.californiaprogressreport.com/site/lawsuit-filed-against-fracking-oil-lobbyist-says-its-safe)

The best "democracy" money can buy

Now we witness the case of a legislator, Senator Michael Rubio, going to work as a “government affairs” representative for Chevron. This will allow Big Oil to buy even more influence in Sacramento that it has already.

Rubio's departure shows you that in California, we have the best “democracy” that money can buy - and is one more example that proves the absurdity of the myth that California is a "green," "environmentally friendly" state.

After all, Governor Jerry Brown and Natural Resources Secretary John Laird have continued and expanded the most environmentally destructive policies of the Schwarzenegger administration. They have fast-tracked the Bay Delta Conservation Plan to build the fish-killing peripheral tunnels, presided over record water exports to corporate agribusiness and Southern California in 2011, and authorized a record "salvage" of 9 million Sacramento splittail and over 2 million other fish including Central Valley salmon, steelhead, striped bass and threadfin shad the same year.

Their list of environmental "accomplishments" includes overseeing the decline of Delta smelt and five other fish species in 2012, presiding over the annual stranding of endangered coho salmon on the Scott and Shasta rivers, clear cutting forests in the Sierra Nevada, and embracing the corruption and conflicts of interests that infest California environmental processes and government bodies ranging from the Bay Delta Conservation Plan to the regional water boards. (http://www.dailykos.com/story/2013/01/09/1177724/-Cold-Dead-Fish-Awards-2012-Go-To-Jerry-Brown-Secretary-John-Laird)
Add Your Comments
LATEST COMMENTS ABOUT THIS ARTICLE
Listed below are the latest comments about this post.
These comments are submitted anonymously by website visitors.