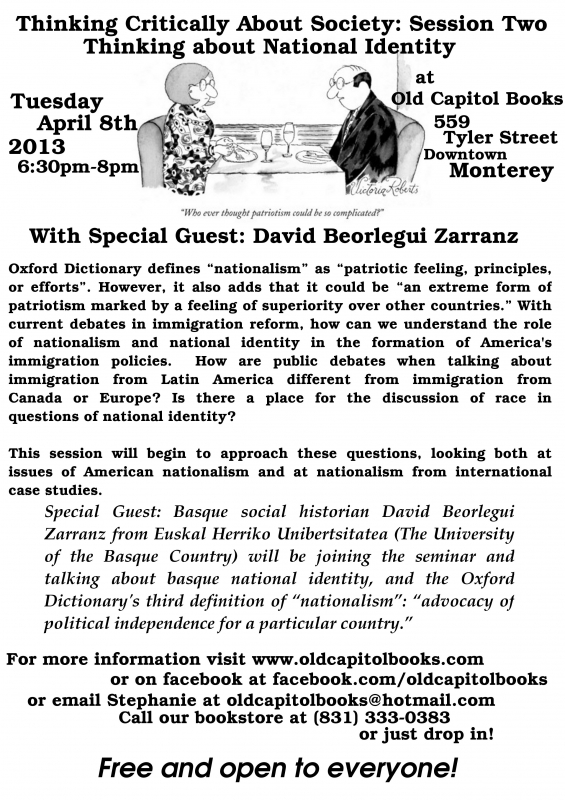 Oxford Dictionary defines “nationalism” as “patriotic feeling, principles, or efforts”. However, it also adds that it could be “an extreme form of patriotism marked by a feeling of superiority over other countries.” With current debates in immigration reform, how can we understand the role of nationalism and national identity in the formation of America's immigration policies. How are public debates when talking about immigration from Latin America different from immigration from Canada or Europe? Is there a place for the discussion of race in questions of national identity?

This session will begin to approach these questions, looking both at issues of American nationalism and at nationalism from international case studies.

Special Guest: Basque social historian David Beorlegui Zarranz from Euskal Herriko Unibertsitatea (The University of the Basque Country) will be joining the seminar and talking about basque national identity, and the Oxford Dictionary's third definition of “nationalism”: “advocacy of political independence for a particular country.”

1.) Bill Ong Hing. “Vigilante Racism: The De-Americanization of Immigrant America” Michigan Journal of Race and Law 7 (2002). Available at: http://works.bepress.com/billhing/5
2.) A.M.C. Rowe. “Whose "America"? The Politics of Rhetoric and Space in the Formation of U.S. Nationalism”

This series of seminar sessions has been put together to encourage the exchange of ideas, experiences, and knowledge surrounding a particular topic or theme. We want to create a place where people can meet with other people from Monterey Bay communities to talk about current events and discuss new philosophies and ways of thinking critically about society. Though these seminars have been designed for non-students, and for those of us who have had little or no college experience, everyone is invited to participate. We believe that everyone can have something to offer to the seminars as we move through current debates in politics and different political and social theories.