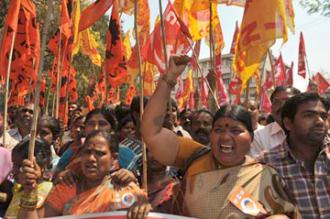 With all 11 central trade unions participating, the working class of India will strike for 48 hours at the end of this week. One hundred million workers are expected to strike. Various professionals are joining as well. This is expected to be the largest strike in India's history. Tens of millions of workers participated in a similar one day general strike last February 2012.

This strike has been called against the anti-worker policies of the governing coalition called the United Progressive Alliance (UPA), led by the Congress Party. Workers' demands against the UPA government include:

* Raise the National Minimum Wage to 10,000 Rupees! (The current minimum wage is between 5500 and 6500 rupees, depending on the state and the industry.)

* Secure Pensions For All!

Revolutionaries and unionists around the world should support this strike and its demands. It is, however, painfully clear that it will take much more than a two day strike to bring about major changes for India's working class. High stakes are involved for both sides. To force the Indian capitalist government to give in to working class demands, workers must attempt to strike until the government gives in to their demands. Unfortunately, the reformist leftist parties and right-wing reactionary parties in the leadership of India's trade unions, who have been voted out of India's current government, are more interested in pressuring and embarrassing the UPA government than they are of leading an effective militant struggle of labor.

What has also been clear is that the major reformist parties of India, in power, have been completely unable to deliver on the needs of the working class and poor peasantry. This is because these various reformist Stalinist (USSR line) and Maoist currents lack a revolutionary program. Groups like the Communist Party of India Marxist (CPI(M)) in power have no program for the overthrow of capitalism. Without such a program, they become defenders of the capitalist state, to the point of doing their dirty work. In fact, the CPI(M) razed the village of Nandigram to silence opposition to the industrial giant Tata Motors, killing 14 and injuring 200.

Like the ANC's "leftist" capitalist government in South Africa that massacred 34 striking mine workers in August 2012 at the Marikana mine on behalf of international mining corporations, the Nandigram massacre in India points to the bankruptcy of reformist leftist politics in power. This is because one of two classes rule society, the workers or the capitalists. Capitalist rule can only be broken through the workers party, once in power, taking rapid steps for the expropriation of capitalist ownership in the economy and smashing the capitalist state through proletarian revolution; establishing a planned socialist economy and workers' democracy. Instead, the ANC and CPI(M) programs make them the errand boys of the national bourgeoisie and international imperialists.

This is an article of Liberation News, subscribe free
https://lists.riseup.net/www/info/liberation_news

Join the discussions of the Revolutionary Tendency on Facebook
http://www.facebook.com/groups/RevolutionaryTendency/

Also from this author, see:

Why The Russian Revolution is Still Important
http://www.indybay.org/newsitems/2012/03/03/18708611.php
§News on Strike
by Steven Argue Wednesday Feb 20th, 2013 8:27 AM
Today, the largest strike in world history is taking place in India, but it is getting very little coverage in the corporate press. It was estimated by the Associated Chambers of Commerce and Industry on Tuesday that the strike will cause 150 billion to 200 billion rupees in losses ($2.8 billion-$3.8 billion). From what I've been able to read in the India corporate press, banks and transportation have been shut down, with even non-union workers joining the strike. The strike is surely wider than this, but that is what the India Times covered. Also, a trade union leader was run over and killed by a scab bus driver, causing clashes. There have been some scuffles with the police and police cars were destroyed. The New York Times has no coverage. Reuters quoted Amitabh Prabhakar, a public relations officer for Indian Railways' saying, "Protesters are squatting on the railway tracks or capturing the locomotives. We're just helpless."