SF: Rally Against the NDAA

by Deetje Boler & Bill Carpenter
David Chiu, President of the San Francisco Board of Supervisors, was the first speaker.

The SF 99% Coalition (http://sf99percent.org/) is working to create a diverse coalition of civil rights and community organizations to oppose the indefinite detention provisions of the National Defense Authorization Act (NDAA). The coalition asked the San Francisco Board of Supervisors to pass a resolution raising its voice in defense of due process and the right to trial, and SF Board of Supervisor's President David Chiu agreed to do so.

Since President Obama first signed the NDAA into law on New Years’ Eve in 2011, everyone in the United States may now be subject to the same lawlessness that rules at Guantanamo. The NDAA contains provisions that could allow indefinite military detention, without a trial or day in court, of anyone accused of any “belligerent act” or terror-related offense—including "material support" based strictly on speech or association. Although a federal judge has found this law to be unconstitutional,  the NDAA remains in effect and the Government continues to defend its power to detain any person without trial.  On January 2, 2013, President Obama signed the NDAA into law without any criticism of these provisions at all, and even the weak Feinstein “due process” amendment that passed in the Senate was removed from the final version of the NDAA.

The 2013 NDAA continues to subject individuals to arbitrary detention without trial, without any guarantee of due process or the right to challenge evidence and confront one’s accuser. The NDAA also endangers First and Fourth Amendment rights, because the PATRIOT Act and the Supreme Court’s holding in <i>Humanitarian Law Project v. Holder</i> expanded the definition of “material support for terrorism” to include crimes of speech and association even by defendants who neither committed nor ever intended to support violence.  More recently, the government's rationalization of a constitutional power to murder Americans without charge or trial appeared in a white paper and President Obama's nominee to head the CIA, John Brennan, declined to say under congressional questioning that the federal government could not use drones to kill Americans domestically.

While the NDAA may be difficult to change at the federal level, a groundswell of public support against indefinite detention is the best protection of constitutional rights and liberties.  Local government resolutions opposing military detention and supporting an accused’s right to a trial focus public attention on these issues.  Such resolutions have been passed in 17 communities across the country. Such a resolution has now been introduced by the San Francisco Board of Supervisors at their February 12, 2013, meeting. And it will be voted upon at their February 26, 2013, meeting, 2 pm, SF City Hall, to see if San Francisco will become the 18th community to pass this resolution which is reprinted in full down below. 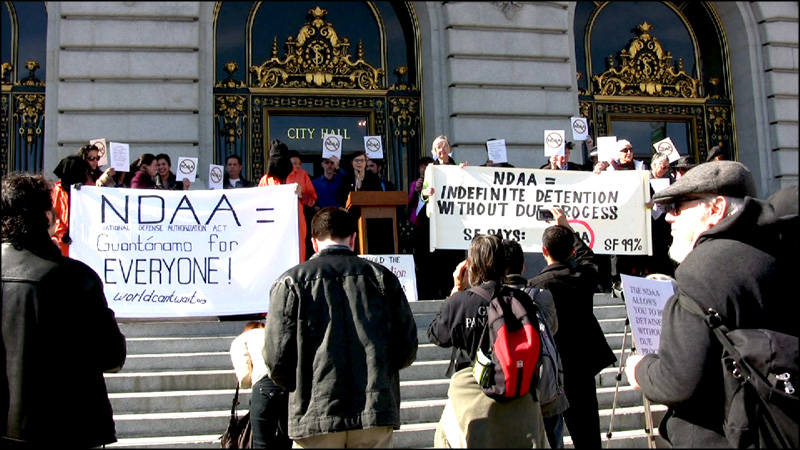 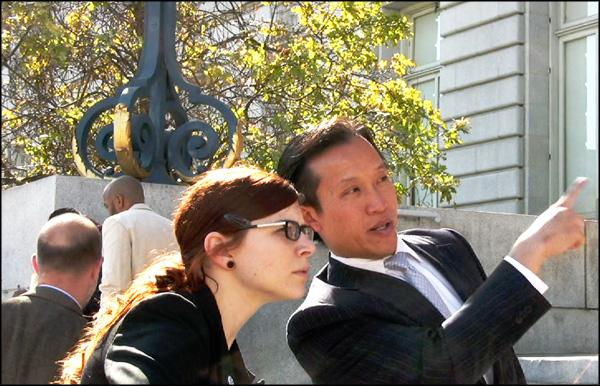 Text of resolution introduced by SF Board of Supervisors David Chiu:

WHEREAS, The Constitution of the United States and the California Constitution are the basis of our representative democracy and reflect protections that no person will be deprived of life, liberty, or property without due process of the law; and

WHEREAS, These founding documents reflect the essential nature of presumed innocence, the right to a speedy public trial before an impartial jury, and other elements of effective due process, and a commitment that no person will be exposed to cruel and unusual punishment; and

WHEREAS, The language of Sections 1021 and 1022 of the National Defense Authorization Act (NDAA) on its face permits indefinite military detention without public trial of any person, including US citizens on US soil; and

WHEREAS, The NDAA could authorize the indefinite military detention of activists, journalists, lawyers, and other Americans for nothing other than exercising their First Amendment rights of free speech, assembly, and association, thus chilling speech and depriving liberty; and

WHEREAS, The NDAA threatens to eliminate the promise of presumed innocence and the right to a fair trial; and

WHEREAS, The NDAA’s detention provisions could allow the recurrence of torture in military detention in violation of the Eighth Amendment; and

WHEREAS, The detention provisions could force US military service members to serve as domestic jailers, in violation of the Posse Comitatus Act, a role for which they are not trained nor is ever appropriate; and

WHEREAS, The FBI Director, the Defense Secretary, the Director of National Intelligence, the Department of Defense, and many of our nation’s generals, admirals, and servicemen and women have opposed the NDAA’s detentions provisions; and

WHEREAS, The City and County of San Francisco is committed to avoid repeating the tragedies and mistakes of history, including the incarceration of Japanese Americans during the World War II; and

WHEREAS, The families of Fred Korematsu, Minoru Yasui, and Gordon Hirabayashi, Japanese Americans incarcerated in World War II, filed an amicus brief with the U.S. Court of Appeals for the Second Circuit in Hedges v. Obama, a lawsuit that challenges the constitutionality of the NDAA’s detentions provisions, citing that, under the pretense of national security, the NDAA essentially repeats the decisions in the discredited World War II legal cases of Korematsu, Yasui, and Hirabayashi, and allows the government to imprison people without any due process rights for an indefinite time; now therefore, be it

RESOLVED, That the City of San Francisco strongly affirms our commitment to the rights and liberties enshrined within the Constitution of the United State, including the Fifth Amendment right to due process, the Sixth Amendment right to trial, and the Eighth Amendment prohibition on cruel and unusual punishment;  and, be it,

FURTHER RESOLVED, That San Francisco public agencies are instructed to decline requests by federal agencies acting under detention powers granted by the NDAA or any authorization of force, that could infringe upon constitutional freedom of speech, religion, assembly, privacy, or rights to counsel; and, be it

FURTHER RESOLVED, That we ask federal and state law enforcement officials acting within the City and County of San Francisco to work in accordance with local law, and in cooperation with the San Francisco Sheriff’s Department and San Francisco Police Department, by allowing any detainees among San Francisco’s residents or visitors access to a trial, counsel, and due process, as provided by Article III of the Constitution of the United States, the Bill of Rights, and Article I of the California Constitution; and, be it,

FURTHER RESOLVED, That the Board of Supervisors asks our U.S. senators and members of the Congress monitor the implementation of the NDAA and actively work for the repeal of the NDAA’s detentions provisions, to restore fundamental rights and liberties embodied in the California Constitution and the Constitution of the United States. To that end, the City and County of San Francisco shall immediately send copies of this resolution to each of our senators and members of Congress, the US Senate Committee on the Judiciary, the US Senate Select Committee on Intelligence, the US House of Representatives Permanent Select Committee on Intelligence, the US Attorney General, and the President of the United States. 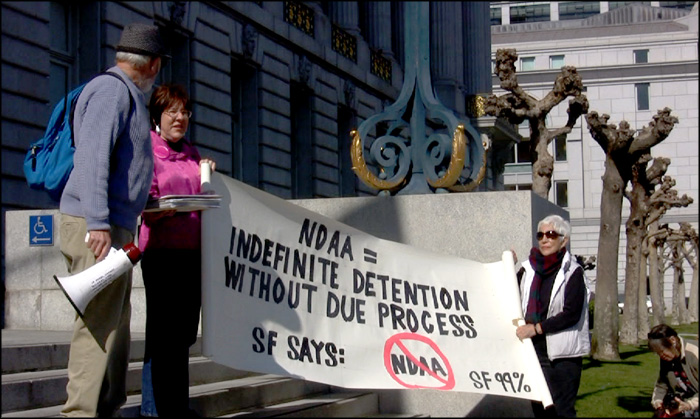 END_OF_DOCUMENT_TOKEN_TO_BE_REPLACED
Add Your Comments
Latest Comments
Listed below are the latest comments about this post.
These comments are submitted anonymously by website visitors.
TITLE
AUTHOR
DATE
Supervisor Chiu is no friend
SF voter
Support Independent Media
We are 100% volunteer and depend on your participation to sustain our efforts!