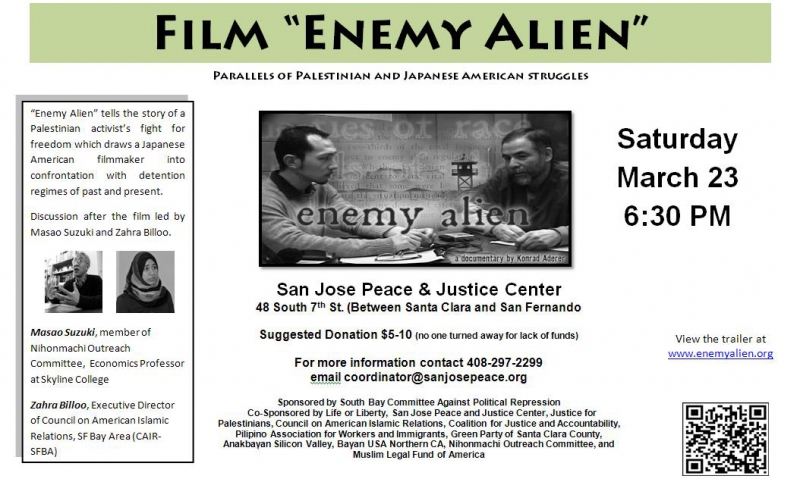 Import event into your personal calendar
Date:
Saturday, March 23, 2013
Time:
6:30 PM - 9:00 PM
Event Type:
Screening
Organizer/Author:
Shelby Minister
Location Details:
San Jose Peace and Justice
48 South 7th Street
A Japanese American filmmaker confronts his own family legacy of World War II incarceration as he joins the fight to free Farouk Abdel-Muhti, a Palestinian-born activist detained in a post-9/11 sweep of Muslim immigrants. Inspired by his grandfather’s unauthorized photographs of life in the camps, filmmaker Konrad Aderer turns the tools of surveillance back on the government, giving audiences an unprecedented glimpse behind the veil of the Homeland Security State. The charismatic Farouk organizes resistance among his fellow detainees, but as brutal abuse from immigration and prison officials begins to take its toll on his health, the fight for his freedom becomes a fight for his life.

Discussion after the film led by Masao Suzuki and Zahra Billoo.

Suggested Donation: $5-10 No one turned away for lack of funds

This event is a collaboration with Life or Liberty, a nonprofit media project on immigrant detention and deportation. (lifeorliberty.org).”

This event is sponsored by South Bay Committee Against Political Repression (SBCAPR), San Jose Peace and Justice Center (SJPJC), Justice for Palestinians (JFP), Council on American Islamic Relations (CAIR), Pilipino Association of Workers and Immigrants (PAWIS), Coalition for Justice and Accountability (CJA), Anakbayan Silicon Valley, Bayan USA Northern CA, and Green Party of Santa Clara County
Added to the calendar on Mon, Feb 11, 2013 6:33PM
Add Your Comments
Support Independent Media
We are 100% volunteer and depend on your participation to sustain our efforts!