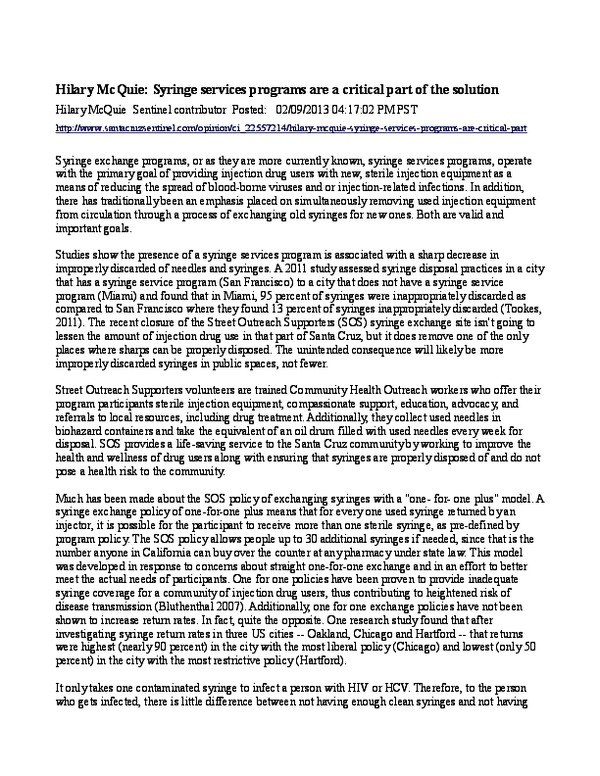 If these aren't accessible there, go to http://www3.cityofsantacruz.com/sirepub/mtgviewer.aspx?meetid=452&doctype=AGENDA and look under agenda item #15.

Most of these recommendations are a defensive response to an onslaught by right-wing pro-Drug Prohibition War, anti-homeless activist groups like Take Back Santa Cruz. Homeless people and their "illegal" (i.e. survival) camps are being blamed for needles, break-in's, endangering children, and all kinds of other bogus accusations completely unsupported by objective stats. Cuts are being proposed in the paltry homeless services being provided. Expansion of an anti-homeless SCPD is proposed. And an absurd and misguided contraction of Needle Exchange is being used as the prime scapegoat.

I include the attached petition, which, while inadequate in not including opposition to the counter-productive 1-for-1 exchange, does push back slightly against the paranoid mind set which is active locally. I'm also including a guest editorial in the Sunday Sentinel that presents what sounds like a good case for opposing the 1-for-1 (no needles given out unless dirty needles returned) proposal.

There's likely to be quite a crowd of misguided Drug War heavies down at City Council tomorrow, but it would be productive to show up anyway. The city's failure to provide public restrooms, adequate disposal facilities, refund and expand needle exchange, & establish safe and legal campgrounds is, of course, largely being ignored by city bureaucrats and politicians (though even some right-wing critics are calling for some of these services).

The Santa Cruz Sentinel has been ramping up the hysteria with various front-page "needle" stories with its main editorial on Sunday leading the charge. Read it and heave: http://www.santacruzsentinel.com/opinion/ci_22557015/editorial-county-must-oversee-needles .

Real solutions like Injection and Inhalation Centers (http://supervisedinjection.vch.ca/ ... http://blog.seattlepi.com/seattlepolitics/2011/09/30/vancouver-injection-center-legal-court-rules/ ) aren't being proposed, though Santa Cruz pioneered (along with San Francisco) medical marijuana tolerance and distribution back in the early 90's. Time to take the lead again.

Homeless people are perhaps the most vulnerable population for the diseases likely to result from this latest Cold War-style attack on harm reduction measures.

Some of the crowd pushing for "clean up" (such as T.J. Magallanes of the Clean Team) really want to respect homeless camps, set up campsites, and take a medical rather than military approach to drug abuse. Come and speak out, if you dare.
Added to the calendar on Mon, Feb 11, 2013 2:45PM
§
by Robert Norse 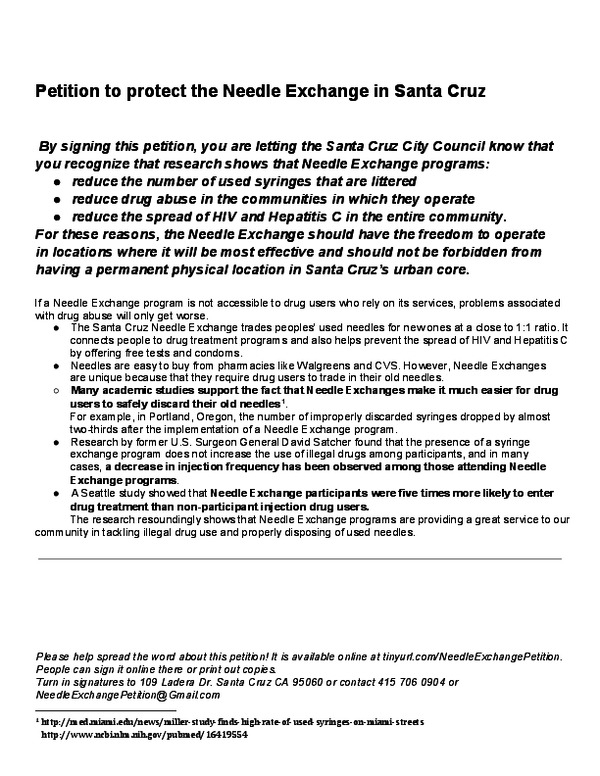 Download PDF (121.7KB)
This petition is also available on line at http://www.thepetitionsite.com/332/529/250/keep-the-needle-exchange-operating-in-santa-cruz-california/#sign .
§
by Robert Norse 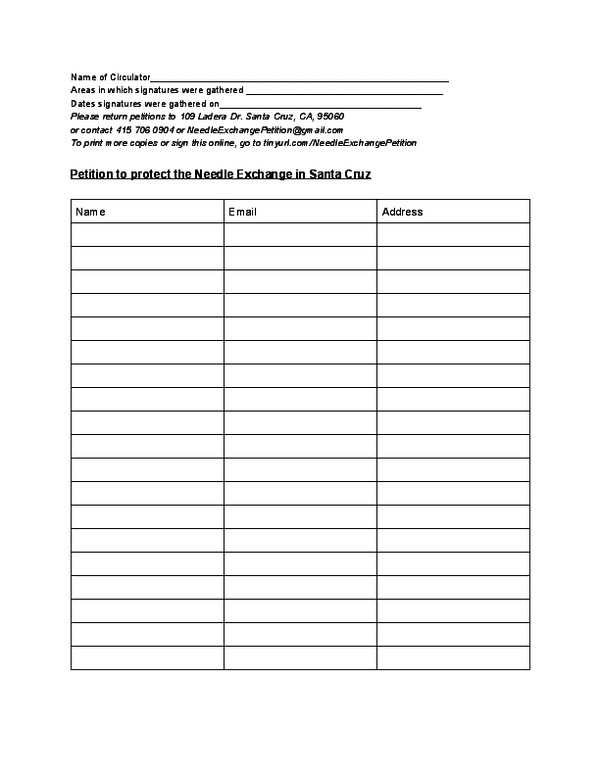 Download PDF (69.2KB)
Add Your Comments
Latest Comments
Listed below are the latest comments about this post.
These comments are submitted anonymously by website visitors.
TITLE
AUTHOR
DATE
Important Analysis
Robert Norse
Reply to "Not Guilty" and
Or just blind to truth
Afternote
Robert Norse
Task force meeting in secret?
Trip Weir
Mini-Update
Robert Norse
Ironic Timing indeed considering the lack of a link to the so-called "credible report"
Razer Ray
I would even go as far to say...
Not Gulity
RE: Hair Splitting
Not Guilty
Hair splitting
Or just blind to truth
RE: Ironic Timing. Was your comment an intentional distortion?
More Factual Analysis
Support Independent Media
We are 100% volunteer and depend on your participation to sustain our efforts!