by Takver - Climate IMC
Carbon capture and storage (CCS) is a thorny and costly problem which scientists are still coming to terms with for a technological solution to mitigating carbon pollution and climate change. But what if we mimic nature, as indeed scientists at Newcastle University in the UK have done in understanding how the simple sea urchin, a thorny little marine creature, uses nickel to turn carbon dioxide in the sea to calcium carbonate for making their exo-skeleton. 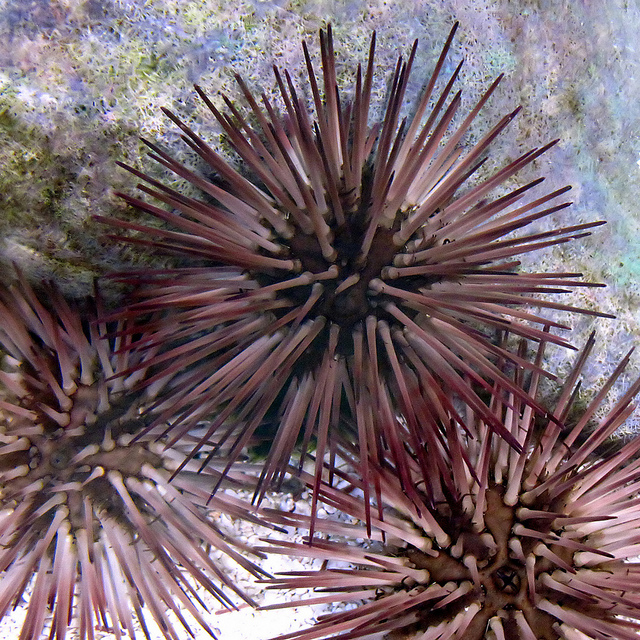 This is another demonstration of the importance of preserving biodiversity: for the insights it can give us in understanding the world around us and assisting in breakthroughs in biological, chemical and pharmaceutical processes. Unfortunately for the sea urchin warming oceans reduce sea urchin sperm longevity impacting the fertilisation process which may lead to sea urchin population decline in the future.

Capturing carbon and long term sequestration is a costly industrial process that currently uses substantial energy and resources. Carbon sequestration is presently only working in pilot programs. Usually CO2 is captured and pumped underground under pressure in depleted oil and gas fields. But there is also a risk of leakage that would substantially lessen any carbon reduction gains made. Earthquakes causing fractures and leakage are also a concern. While there are many pilot CCS plants in operation round the world, industrial scale CCS plants are still a coal mining company's dream.

Several alternate methods for carbon capture and storage (CCS) are being researched and have been proposed as possible answers. See Scientific breakthrough: Remove CO2 from pollution and atmosphere for alternate fuel (Jan 2012) and Award for ground breaking research in capturing Carbon Dioxide (Aug 2010). For a discussion on Carbon Capture and Storage and seismicity see Carbon capture and storage and the Melbourne Earthquake (June 2012)

So a method of extracting waste carbon from coal fired power stations and chemical plants and converting it to a stable mineral form like Calcium or Magnesium Carbonate seems like a no brainer. Especially if it can be done cheaply and efficiently at commercial industrial scale.

Discovery by chance - Sea Urchins use nickel to absorb CO2

Scientists at Newcastle University discovered Nickel as a successful and cheap catalyst entirely by chance. Dr Lidija Šiller, a physicist and Reader in Nanoscale Technology at Newcastle University said "We had set out to understand in detail the carbonic acid reaction - which is what happens when CO2 reacts with water - and needed a catalyst to speed up the process," she explained.

"At the same time, I was looking at how organisms absorb CO2 into their skeletons and in particular the sea urchin which converts the CO2 to calcium carbonate. "When we analysed the surface of the urchin larvae we found a high concentration of Nickel on their exoskeleton. Taking Nickel nanoparticles which have a large surface area, we added them to our carbonic acid test and the result was the complete removal of CO2."

The researchers propose that instead of sequestration storage of CO2 deep underground, that the captured CO2 could be converted to a mineralised form as calcium or magnesium carbonate. As a stable compound it could then be stored safely or even reused in cement for building purposes or to make plaster castes for hospitals.

Using Nickel as a catalyst

Gaurav Bhaduri, study lead author and a PhD student in the University's School of Chemical Engineering and Advanced Materials explained the process: "One way to do this is to use an enzyme called carbonic anhydrase. However, the enzyme is inactive in acid conditions and since one of the products of the reaction is carbonic acid, this means the enzyme is only effective for a very short time and also makes the process very expensive."

"The beauty of a Nickel catalyst is that it carries on working regardless of the pH and because of its magnetic properties it can be re-captured and re-used time and time again. It's also very cheap - 1,000 times cheaper than the enzyme. And the by-product - the carbonate - is useful and not damaging to the environment."

"What our discovery offers is a real opportunity for industries such as power stations and chemical processing plants to capture all their waste CO2 before it ever reaches the atmosphere and store it as a safe, stable and useful product."

Calcium carbonate, also known as chalk, makes up around 4% of the Earth's crust and acts as a carbon reservoir, estimated to be equivalent to 1.5 million billion metric tons of carbon dioxide. Once captured, CO2 can be converted to calcium carbonate, and then safely stored or used to make cement or for medical use as plaster casts.

The Newcastle University team have developed a process that involves passing CO2 waste gas directly from a chimney top, through a water column rich in Nickel nano-particles and recovering the solid calcium carbonate from the bottom.

Cheap capture and effective and safe storage of CO2 is important explained Dr Siller, "The capture and removal of CO2 from our atmosphere is one of the most pressing dilemmas of our time." she said.

"Our process would not work in every situation - it couldn't be fitted to the back of a car, for example - but it is an effective, cheap solution that could be available world-wide to some of our most polluting industries and have a significant impact on the reduction of atmospheric CO2."

Dr Šiller said "The current challenge that we are addressing is to quantify the process. We would like to determine the reaction kinetics and exact yields. Once we have this information we plan to do a small continuous process in a lab-scale pilot plant." reported Chemistry World.

Like other 'breakthrough' processes in carbon capture, this one may prove to be less useful than first thought. "This work represents an incremental addition to CO2 capture where the catalytic dimension is relevant," said Professor Mark Keane from the Chemical Engineering Department of Heriot-Watt University in Edinburgh, UK.

The process has been patented with the researchers currently looking for investors to fund further research and development and possible commercialisation of the process.

Most of the energy imbalance of the earth has been in the absorption of heat in the world's oceans, which has moderated increase in global atmospheric temperatures. Our oceans are warming and this will have detrimental consequences for marine life. Already we are seeing substantial bleaching events for coral reefs, and with these ocurring more frequently coral does not get a chance to recover from bleaching damage. It can take several years for a coral reef to recover from a bleaching event.

The researchers Binet and Doyle conducted studies of sea urchin fertilisation success in current ambient (20°C), near-future (24°C) and future (26°C) ocean-temperature scenarios over 3 hour periods. "Sperm longevity, based on fertilisation success, significantly decreased following a 1-h exposure at 26°C, or a 3-h exposure at 24°C, relative to the 20°C treatment." said the researchers in the study abstract. "Our results suggested that at projected sea-surface temperatures, the longevity of sea urchin spermatozoa is reduced, which may have consequences for sea urchin population dynamics."

An earlier paper by Maria Byrne et al in 2009 published in the 'Proceedings of the Royal Society B: Biological Sciences' found that Temperature, but not pH, compromises sea urchin fertilization and early development under near-future climate change scenarios. The abstract concluded:

"At 26°C, development was impaired. As the first study of interactive effects of temperature and pH on sea urchin development, we confirm the thermotolerance and pH resilience of fertilization and embryogenesis within predicted climate change scenarios, with negative effects at upper limits of ocean warming. Our findings place single stressor studies in context and emphasize the need for experiments that address ocean warming and acidification concurrently. Although ocean acidification research has focused on impaired calcification, embryos may not reach the skeletogenic stage in a warm ocean."

So while sea urchins may inspire us for processes to capture and store CO2, ocean warming is likely to contribute to their population decline due to reducing sperm longevity in the fertilisation process. 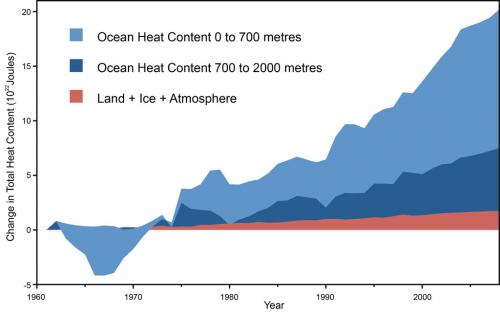 http://www.skepticalscience.com/graphics.php?g=65
Skeptical Science Graphics licensed under a Creative Commons Attribution 3.0 Unported License.
Add Your Comments
Support Independent Media
We are 100% volunteer and depend on your participation to sustain our efforts!