Add an Event
Newswire
Calendar
Features
Home
Donate
From the Open-Publishing Calendar
From the Open-Publishing Newswire
Indybay Feature
Publish to Newswire
Add an Event
Related Categories: Santa Cruz Indymedia | Global Justice & Anti-Capitalism | Police State & Prisons
Another Ridiculous Round of Arraignments
by Robert Norse
Wednesday Jan 23rd, 2013 5:40 PM
The prosecution of Franklin "Angel" Alcantara, Brent Adams, and Gabriella Ripplyphipps is heading into its second year with a cost of over $100,000 if you consider the court time and expense spent on the Santa Cruz Eleven cases. Harder to calculate is the loss of reputation for courts, cops, and prosecution (which may actually enable people to view them more realistically), the injury to the defendants, and the chill this case has spread over the activist community. The focus has been shifted from the criminal banksters to the whistle-blowers who have exposed them. But D.A. Bob Lee shows no signs of quitting. 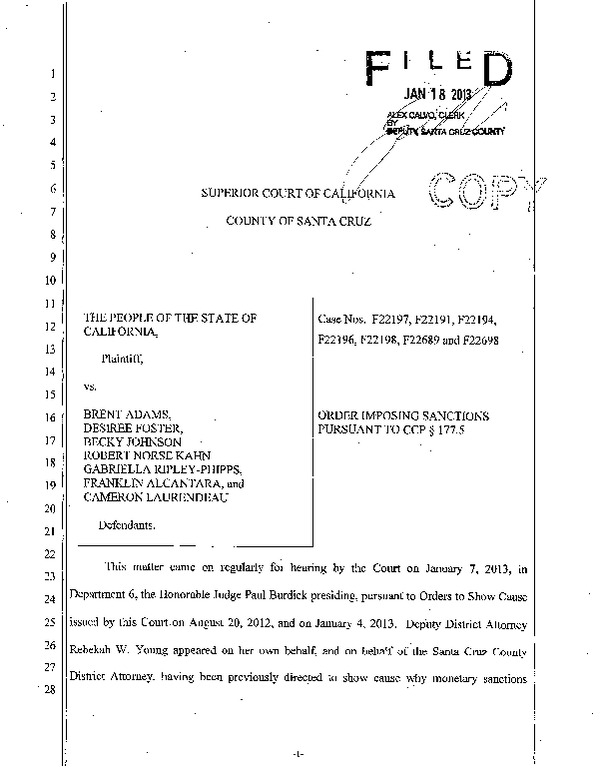 Download PDF (201.2KB)
NO CASE BUT NO END TO THE PROSECUTION
The bogus, costly, and misdirected prosecution of the Santa Cruz Eleven grinds on. Charges against me and all but four of us were dismissed as of two weeks ago after eleven long months and endless court hearings.

Why? Judge Burdick was given no evidence that any of us (1) broke into the bank; (2) conspired to break into the bank; (3) committed felony vandalism; (4) conspired to commit felony vandalism; (5) refused to leave after a properly given police warning, or (6) "occupied" the bank--all "trespass-occupation" charges were dropped. Hence no one is guilty--among those charged.

Even more, none of us--especially those whose charges were dropped--should ever have been charged in the first place. There was insufficient evidence to go to trial and no connection with vandalism--a charge cooked up, it looks like, to shore up what was otherwise a massively overcharged political persecution.

There certainly were people who occupied and committed vandalism. Police chose not to act in a legal or timely fashion to actually deal with legally prosecutable trespass and actual vandalism. That was their choice at the time.

Instead the SCPD turned in reports that indicated a desire to use the case to go after high-profile activists, reporters, and whistle-blowers that they didn't like. D.A. Bob Lee piled on with a host of ridiculous and unsupportable charges, mainly to act as bagman for Wells Fargo's outrageously overstated clean-up costs.

ASSISTANT D.A. GONE WILD, GETS UNPRECEDENTED BUT ULTIMATELY MINOR SANCTIONS
He appointed the incompetent and mendacious Assistant D.A. Rebekah Young. Young refused and/or failed to provide the defense with the police videos and other information--in spite of repeated orders from Judge Burdick. For the first time I've ever heard of, the court actually (reluctantly) sanctioned the D.A.'s office to the tune of $500 (probably less than 1/100th of the costs to attorneys, defendants, prosecutors, and judges). A cost that is still rising.

Attached to this article is Judge Burdick's lengthy documentation of Young's misconduct. Again, Burdick refused to even consider fining Young personally even a fraction of the costs she created. Nor would he adopt an evidenciary sanction (withholding evidence that was not turned over to the defense), nor would he dismiss the charges outright--though her abuses were repeated and glaring. Burdick's excuse for not doing so was that he didn't want the State Bar to hear of Young's misconduct (which would happen if it were over $1000). Prosecution lawyers apparently get the kid glove treatment when they cost tens of thousands of dollars and drag innocent people through the courts.

A STORM OF PROSECUTIONS AFTER A TWO MONTHS DELAY--WHY NO ACTION BACK IN DECEMBER?
Last February, sheriffs came to the homes of three defendants and hauled them off in handcuffs without prior notifications, requiring bail in several cases. A year later, all of these cases had been dropped for lack of evidence, indicating no probable cause for the charges in the first place--to say nothing of the arrests. There has been no explanation for this abusive process, much less apologies or restitution.

Why did the SCPD and D.A.'s office adopt the bizarre procedure of waiting two months to charge the group of activists targeted? The bank occupation had ended peacefully. Occupy Santa Cruz had largely dispersed. The purpose of the subsequent police action seemed largely vindictive and/or political--to "send a message" that regardless of the merit of the charges and the innocence of the defendants, this was a convenient time to chill any possible future protests. For all the activists, this was the first time felony charges--threatening a possible six years in prison--were raised.

Why didn't the SCPD, if its real purpose was to prevent vandalism and penalize trespass, move on the activists a day or two into the Occupation?

Perhaps the SCPD recognized that this protest was part of a national wave of popular outrage...

(a) against a Wells Fargo leased property--Wells Fargo being one of the biggest thieves and home-wreckers as well as a multi-billion dollar welfare queen;

(b) It was taken as winter descended for 1000-1500 homeless people in a city with shelter for less than 10% of them while vacant bank buildings stood empty downtown year after year;

(c) Legislators and officials were doing nothing substantive to deal with foreclosure fraud and real estate speculation or compensate those swindled, except reward the swindlers with bail-outs. This is still the case. The community was peacefully but forcefully taking to the streets to empower itself to take real action.

(d) The SCPD may have recognized that the broader wave of outrage had broad and deep roots nationally. A hasty response might well have resulted at the very least in toxic publicity (as in the Davis pepper spraying) and successful civil lawsuits, and at the worst serious rioting downtown.

And the SCPD's restraint did avoid both these dangers for its political and business clients.

They could have been content with this success and the subsequent withering away of the Occupy movement. But no. Instead of moving in with uniformed or undercover officers to document trespass and vandalism when the occupation was happening (after the first day when the danger of violence was far less), they chose to subsequently go after their least favorite activists and those who had been willing to talk with them candidly during the protest. A lazy and despicable tactic.

Obviously all charges must be dropped. Even for those who hate the activists involved, surely saving face for D.A. Bob Lee and Police Chief Kevin Vogel is not an appropriate use of taxpayer dollars. Tying up the courts with this political sideshow takes time, energy, and focus away from real criminal behavior.

Those who equate a political protest against a known corporate criminal like Wells Fargo in a 3 1/2 year vacant building with a Mom-and-Pop home invasion are talking inflammatory nonsense.

Wells Fargo is the real criminal. Lee and Young, acting as bagmen for the bank and cover for the SCPD, need to be fired. The defendants and their lawyers should be fairly compensated for this lengthy and costly circus. In a just society such a witch hunt would have been swept aside long ago.

The Sentinel's skeletal coverage of this ongoing kangaroo court hippity-hop can be found at http://www.santacruzsentinel.com/localnews/ci_22425154/remaining-santa-cruz-11-bank-building-takeover-defendants . My comments (a briefer version of this story) follow in the comments section.

A Sentinel letter by David Silva-Espinoza (no relation to David Minton Silva, the long-time Santa Cruz homeless activist) and comments is at http://www.santacruzsentinel.com/opinion/ci_22372754/you-see-it-jan-15-2013.

The next hearing in the case is for Cameron Laurendeau on Friday February 1st at 8:15 AM in Department 6. For further updates check http://www.santacruzeleven.org .