January 19th marks the third anniversary of Citizens United v FEC, the Supreme Court decision that overturns a century of precedent to allow unlimited amounts of corporate money to flood into our political system.

Chevron is the poster child for the resulting abuse. It brazenly donated over $2 million to Boehner’s Republican Super PAC to ensure that Big Oil maintains its stranglehold on national energy policy. In our own backyard, Chevron’s toxic money spill --$1.2 million to buy off the Richmond City Council race—cost two progressive seats. Just as surely as the recent fire polluted Richmond’s air, Chevron’s money pollutes both national and local politics. Chevron’s corporate pollution must be cleaned up and prevented from recurring.

Join Common Cause, Richmond Progressive Alliance, Global Exchange, MoveOn, Urban Tilth, Occupy Richmond, Occupy San Francisco Environmental Justice Working Group, West County Toxics Coalition, Communities for a Better Environment, Amazon Watch, Move to Amend and many others on January 19th at 12 noon at the Richmond BART station for a 2.6 mile march to the Chevron refinery gates for a CORPORATE CLEAN UP ACTION. If you're not up for a hike, just meet at 1 pm at Chevron Gate 14 (Castro St. and Chevron Way).

Political and environmental pollution have a common source, and fighting climate change effectively demands that we first reclaim our democracy. Citizens United and Buckley v. Valeo must be overturned, and constitutional “rights” become the sole province of the American people. We reclaim democracy from our current corporatocracy!

Added to the calendar on Mon, Jan 14, 2013 11:00AM
§Citizens United Day of Action at Chevron
by Shoshana Wechsler 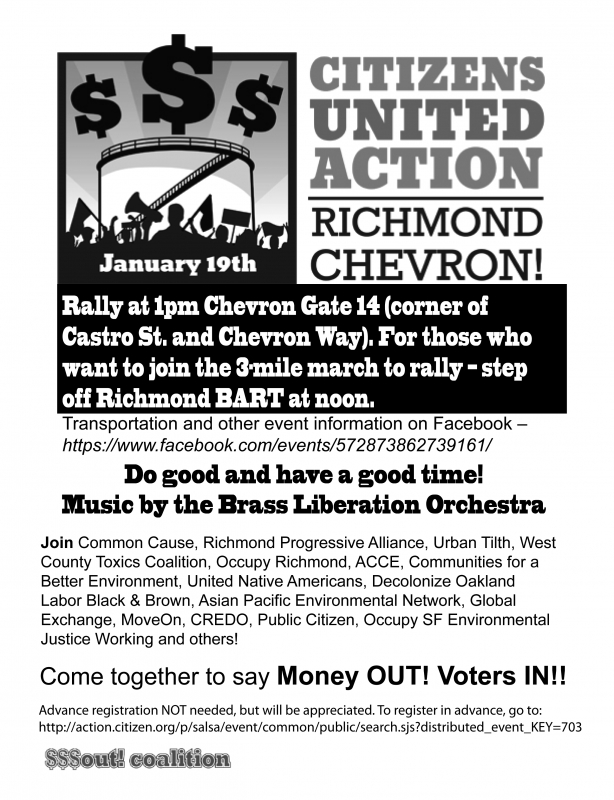 original image (2550x3321)
Please join us on January 19th at 12 noon at the Richmond BART station. We‘ll march 2.6 miles to the Chevron Refinery Gate 14 in Richmond, accompanied by the Brass Liberation Orchestra. If you don't want to march, just meet directly at Chevron Gate 14 (Castro St & Chevron Way) for speakers, music and a huge human billboard. The rally at the gate starts at 1 pm. Let's show Chevron what real Human Energy is all about!