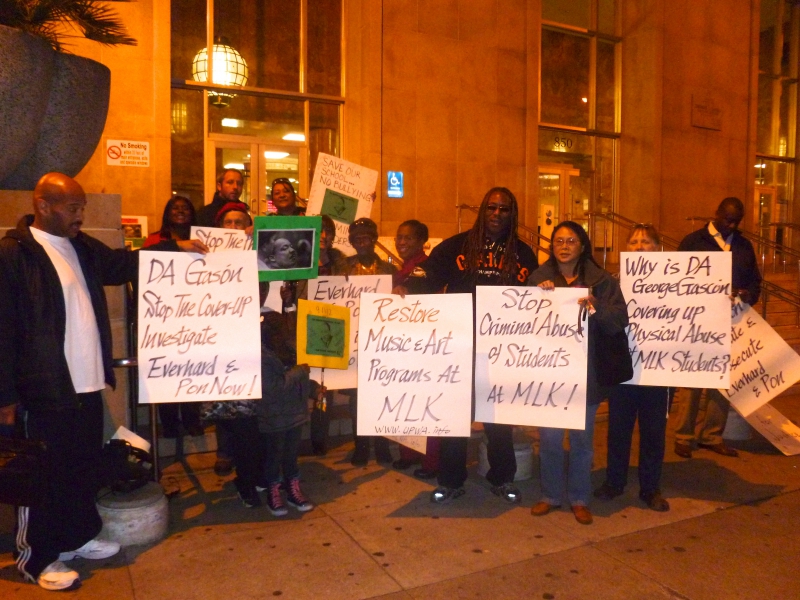 On the anniversary of 2013 Martin Luther King's birthday, the San Francisco Unified School District under the control of Superintendent Richard Carranza is seeking to fire 40 year UESF member and MLK security guard Tobias Caine with a Skelly hearing. Tobias was injured last February when the principal at MLK personally intervened to sit on a student in an act of physical abuse. As a result of her physical intervention in this incident Caine was injured and now the district is seeking to discharge Caine instead of taking action against the principal.
This incident was also part of a massive bullying campaign at the school against Tobias and 16 other teachers and staff who were driven out of the school by Natalie Eberhard, Assistant Principal Anthony Braxton and Associate Superintendent of Middle Schools Jeannie Pon. After this incident Tobias and other whistleblowers were retaliated against by the management of the district who also refused to make a full investigation of the incident.
http://youtu.be/5zVuIU2dMmY
Despite the fact that Superintendent Richard Carranza said a full investigation had been done, Tobias Caine, SEIU 1021 member and school secretary Nancy Saloou and UESF teacher Linda Cooks who were aware of the incident and some were even witnesses to the incident they were never interviewed by the school district in their "investigation". Assistant Principal Anthony Braxton actually produced a report that lied about the incident stating that Caine had been injured by the student who was sat on by the principal. The incident which is on a video tape shows that as a result of the direct physical intervention of the Principal Eberhard, Caine was injured.
This criminal cover-up of this abuse incident has now led to a criminal investigation about the incident after police reports were filed. At the same time the Superintendent has stated that these allegations were "slander".
http://www.sfgate.com/bayarea/article/Teachers-accuse-SF-principal-of-bullying-4071937.php
The installation of Principal Natalie Eberhard who has a record of bullying at A.P. Giannini and other schools also as her first act at MLK Middle School gave away the band instruments and eliminated the music and art program at the school. Is this a way to commemorate MLK at a school of a high percentage of Black and Latino students?
http://www.baycitizen.org/education/story/suspensions-skyrocket-sf-school-violence/
http://www.baycitizen.org/education/story/parents-teachers-protest-sf-school/
The school is also part of the SERP program funded by the Bechtel Corporation and other "non-profits" pushing "core standards" more testing and privatization. While Bechtel and other billionaire foundations like the Bill and Melinda Gates Foundation and the Broad Foundation have money for more testing and charters they apparently have no money to make sure that the music and art program is defended and counselors stay at this public school.
http://www.serpinstitute.org/downloads/SERP_2010_Brochure.pdf
http://www.serpinstitute.org/field-sites/san-francisco/san-francisco.php
It is time for an investigation and prosecution of Principal Eberhard, Assistant Principal Anthony Braxton, Associate Superintendent Jeannie Pon and Superintendent Richard Carranza.
http://youtu.be/3g_a0TGIIOk http://youtu.be/Nt1joDimmgs
Call the District Attorney George Gascón and speak out for the prosecution of these bullies and the criminal cover-up of physical abuse of students at the school. There is an epidemic of bullying against public workers and the time to take action is now. There is an epidemic of bullying against public workers and the time to act and stop this is now!
Lets honor the birthday of MLK by demanding justice for the students, staff and parents of Martin Luther King Middle School in 2013.
Stop the Firing Of UESF Member Tobias Caine
Restore the Music and Arts Program At MLK
Return All Bullied Education Workers At MLK
For full investigation and criminal prosecution of criminal child abuse
Stop Union Busting and Racism in San Francisco Martin Luther King Middle School


END_OF_DOCUMENT_TOKEN_TO_BE_REPLACED
Added to the calendar on Mon, Jan 14, 2013 9:45AM
§Teachers, Staff and Parents Protest Against Bullying
by United Public Workers For Action UPWA 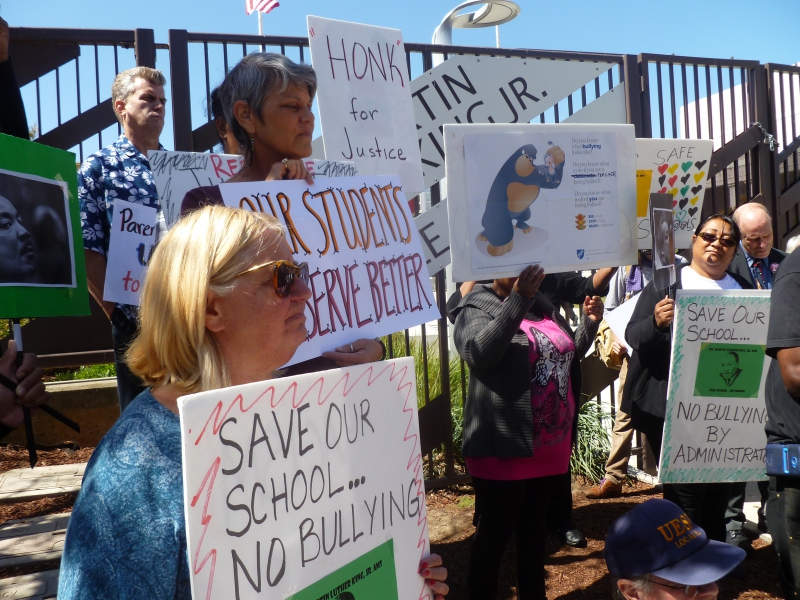 original image (4320x3240)
Teachers, Staff and parents have been protesting against the bullying and physical abuse at the MLK Middle School in San Francisco.
END_OF_DOCUMENT_TOKEN_TO_BE_REPLACED
Add Your Comments
Support Independent Media
We are 100% volunteer and depend on your participation to sustain our efforts!