Vigil Demonstration in front of General Consulate of France 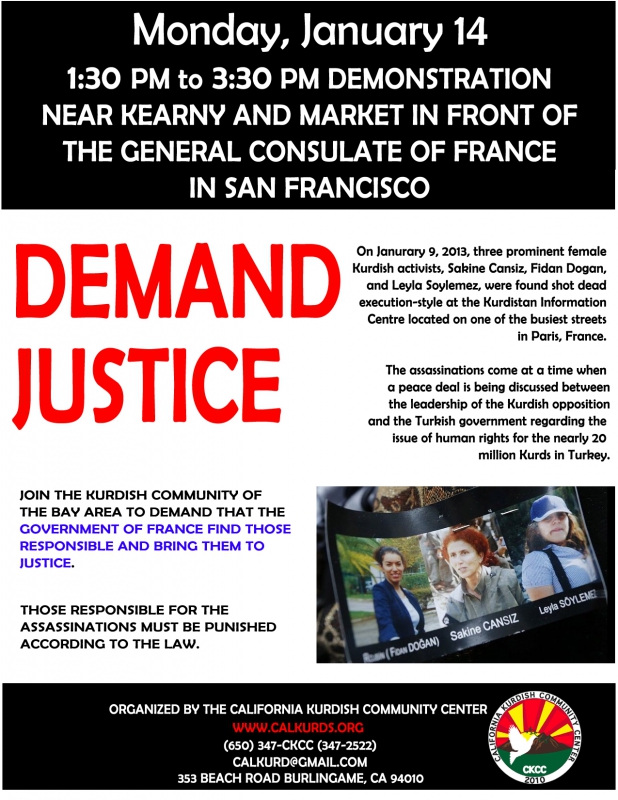 French Interior Minister Manuel Valls who visited the Kurdish Centre (where the bodies were found) said the deaths were “without a doubt an execution.” He called it a “totally intolerable act.” The three women were alone at the centre when assassinated. The news prompted angry crowds of Kurds around the World. Their bodies were discovered by friends who went there after midnight and saw traces of blood on the door which they then broke down.

These assassinations aimed to silence Kurdish Nation`s demand for recognition in Turkey and emerging autonomous self rule in dissolving Syria. The culprits are highly likely directed by those who, in their narrow mind, aimed to suppress Kurdish aspirations for freedom and justice.

Sakine Cansiz is a founding member of Kurdistan Workers Party (PKK). The PKK, seeking self-rule for Kurds, has organized a spectacular grass root uprising and a strong resistance movement against the oppressive Turkish regime since 1984 in Eastern and Southeastern Turkey. She is a symbol of Freedom and justice and a monumental figure in Kurdish Women Movement and its contribution to the uprising. She is the fresh memory of near Kurdish history and the brave testament of Kurdish Women Struggle.

Turkish regime tortured her in Diyarbakir jail where her breasts were mutilated. In her words, she said "I have never said ah, because I am part of a struggle that is a just". She will forever remain in the hearts and minds of Kurdish nation and guide them to the ultimate freedom and justice.

Fidan Dogan was the Director of the information centre and European Representative of the Union of the Communities in Kurdistan (KCK) and Leyla Soylemez was a staff member.

The conflict between the PKK and Turkish army has claimed tens of thousands of lives since the rebels took up arms in 1984. Turkey has resumed talks with Kurdish Leader Abdullah Ocalan in prison with the goal of convincing the PKK to disarm.

Kurds make up more than 20% of Turkey’s 75 million populations whose language is banned, culture is not recognized and its history and identity has been denied for the past 90 years by the Turkish state.

In Turkey, Selahattin Demirtas, the leader of a Kurdish political party, Peach and Democracy Party, in Turkey’s parliament, called on the French government to shed light on the killings “without delay” and in a way that “leaves no room” for doubt. “We want it to be known that these assassinations which were carried in the busiest area of Paris cannot be covered up,” Demirtas said.

France has occasionally arrested Kurds to please Turkish state claiming that Kurds in Europe are illegally financing the PKK.
Turkey has also consistently misled the international community that the PKK raises funds through extortion or other criminal activities in European countries where large number of Kurdish refugees live.

Kurds, demand that the Government of France found and brought those responsible for the assassination of the 3 Kurdish women to justice.

Please join the Kurdish Community on Monday, January 14th between 1:30 and 3:30, near Kearny and Market Street in front of the General Consulate of France in San Francisco to demand that the Government of France find those responsible and bring them to justice. 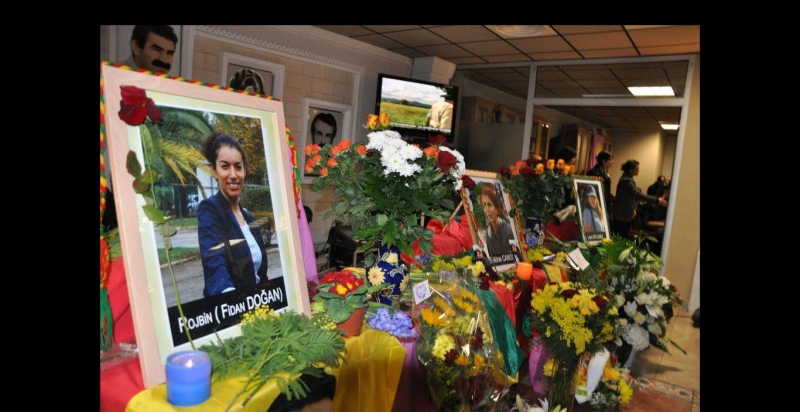 original image (1366x704)
END_OF_DOCUMENT_TOKEN_TO_BE_REPLACED
Add Your Comments
Support Independent Media
We are 100% volunteer and depend on your participation to sustain our efforts!