Add an Event
Newswire
Calendar
Features
Home
Donate
From the Open-Publishing Calendar
From the Open-Publishing Newswire
Indybay Feature
Publish to Newswire
Add an Event
Related Categories: Santa Cruz Indymedia | Global Justice & Anti-Capitalism | Police State & Prisons
Preliminary Hearing Begins for Seven Defendants Associated with 75 River Bank Occupation
by Alex Darocy (alex [at] alexdarocy.com)
Tuesday Jan 8th, 2013 12:55 AM
On January 7, a preliminary hearing began for seven of those charged in association with the Fall 2011 occupation of the vacant bank at 75 River Street in Santa Cruz, when community members hoped to "liberate" the space and turn it into a community center during the height of the national Occupy movement. After a variety of legal delays, the court will decide who, if any, of the seven of the eleven who were originally charged will stand trial. Charges against four of the individuals were previously dismissed in 2012. 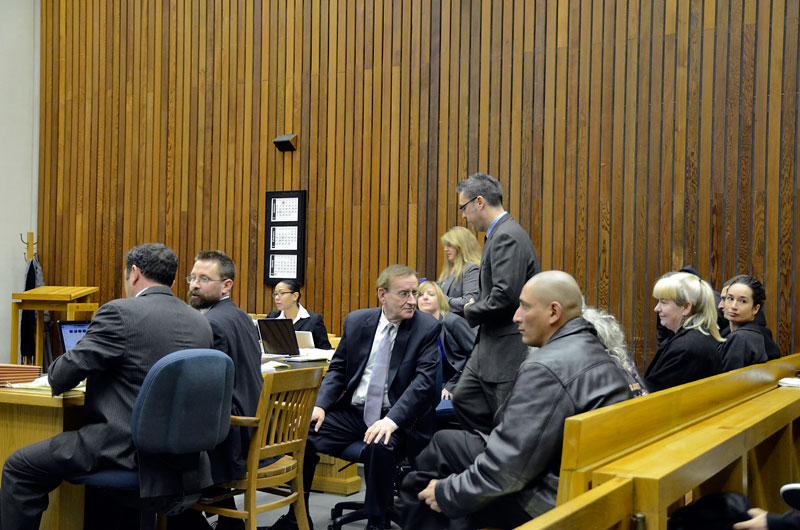 The attorneys huddled around the defense desk with their laptops and various documents, as six of the defendants sat on the bench, lined up behind them. One defendant, Desiree Foster, was forced to sit in the audience section of the court and located two rows back, placing her far away from her legal council during the proceedings.

Three prosecution witnesses took the stand before the day was over: Lt. Larry Richard, Sgt Michael Harms, and Officer Michael Headley, all of the Santa Cruz Police Department.

Charges were dismissed against Ed Rector and Grant Wilson by Judge Burdick in April of 2012, and Bradley Stuart Allen and Alex Darocy, both Indybay journalists, had the charges against them dismissed also by Burdick in May of 2012.


The preliminary hearing is set to continue on Tuesday, January 8 at 10am in Dept 6 at the Santa Cruz Courthouse at 701 Ocean Street in Santa Cruz.

For more information about those charged, see:
http://santacruzeleven.org/ 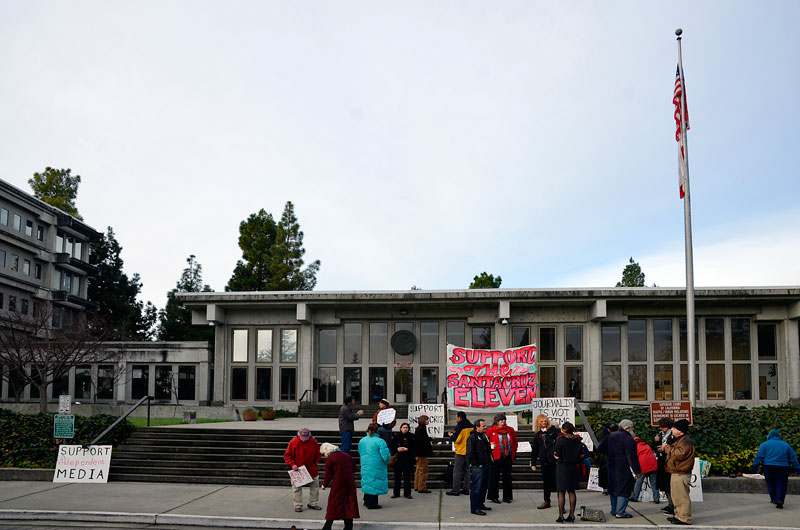 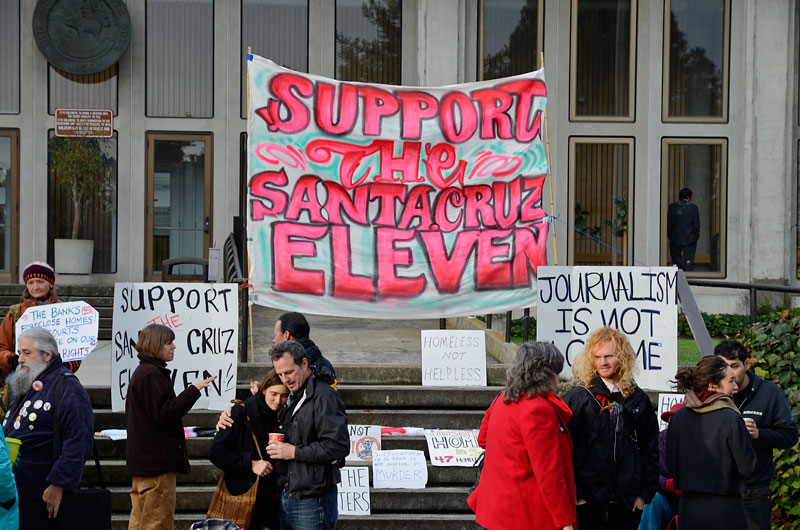 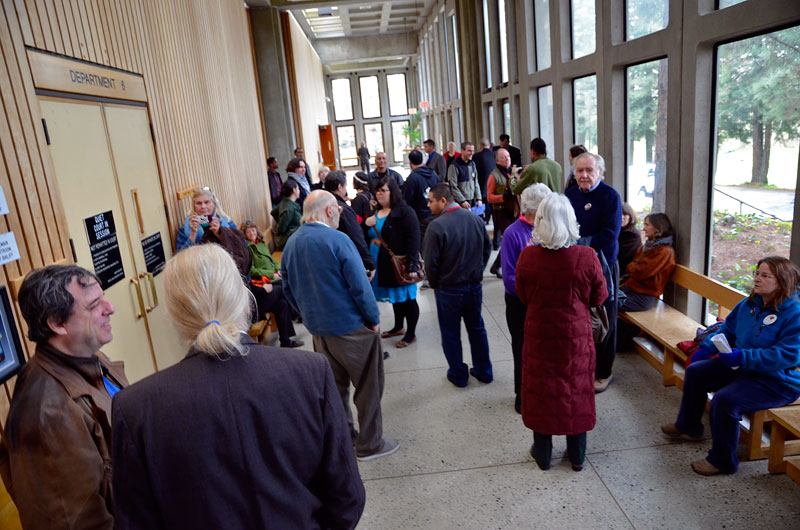 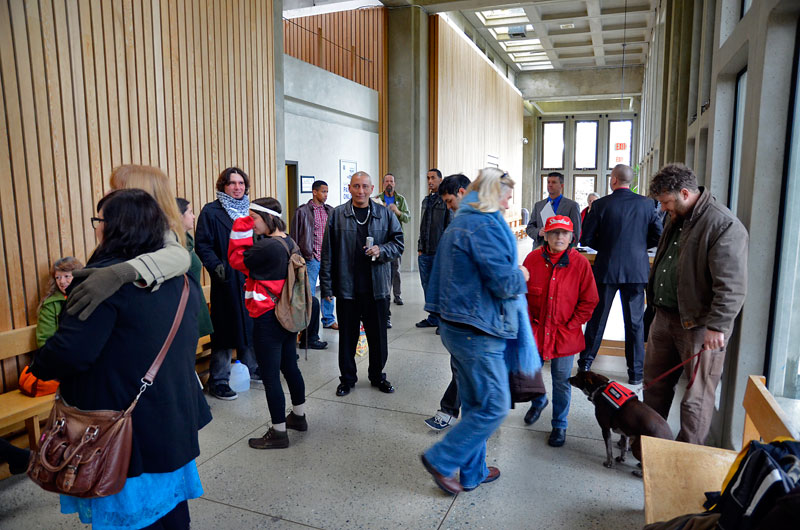 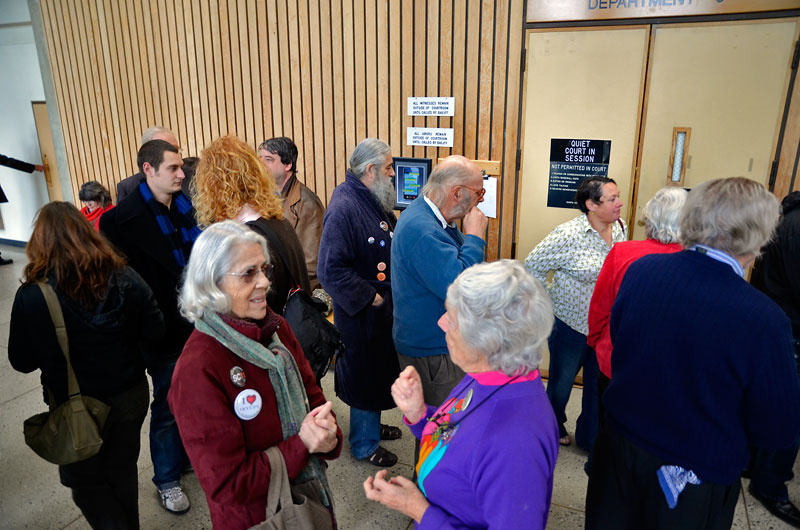 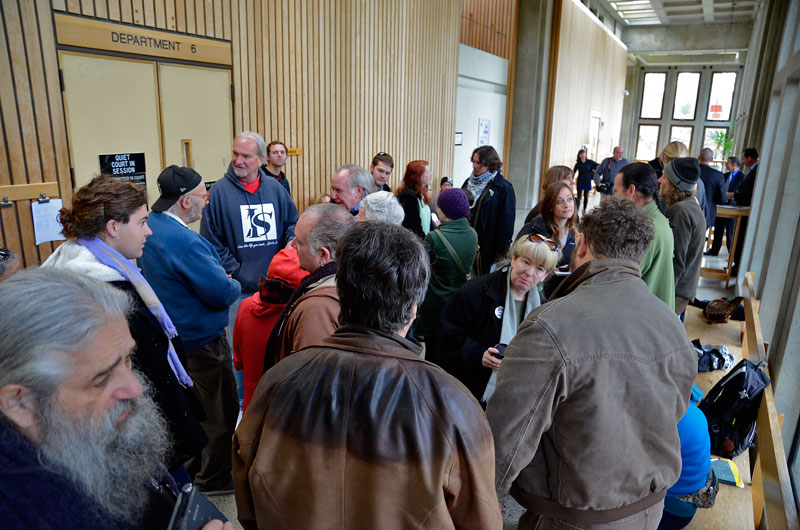 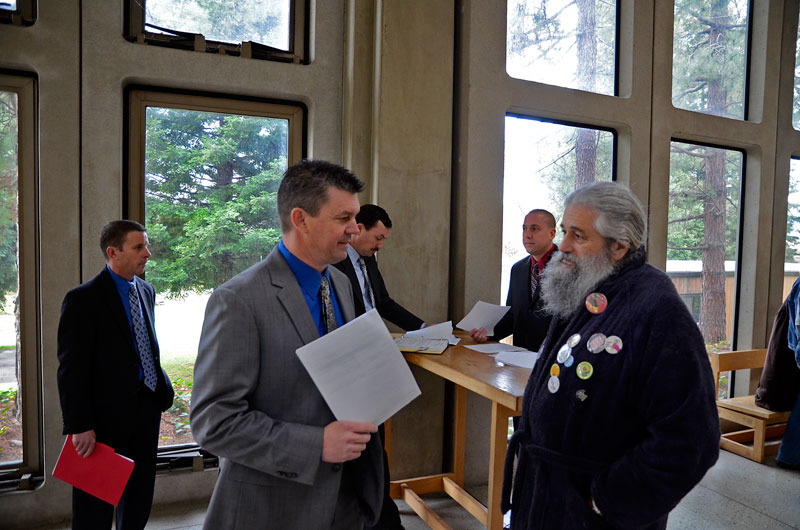 Robert Norse hams it up with Sgt Michael Harms of the SCPD. In the background are Officer Winston, Officer Gunter, and Lt Richard, all of the Santa Cruz Police Department.
§
by Alex Darocy Tuesday Jan 8th, 2013 12:56 AM 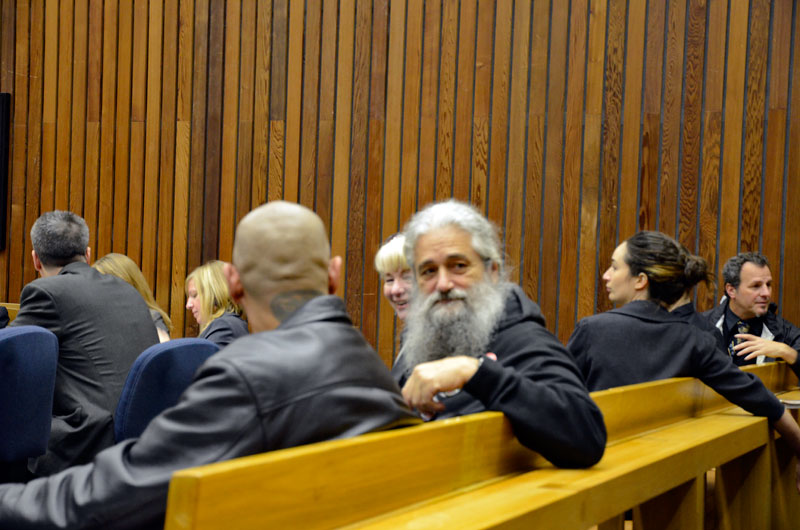 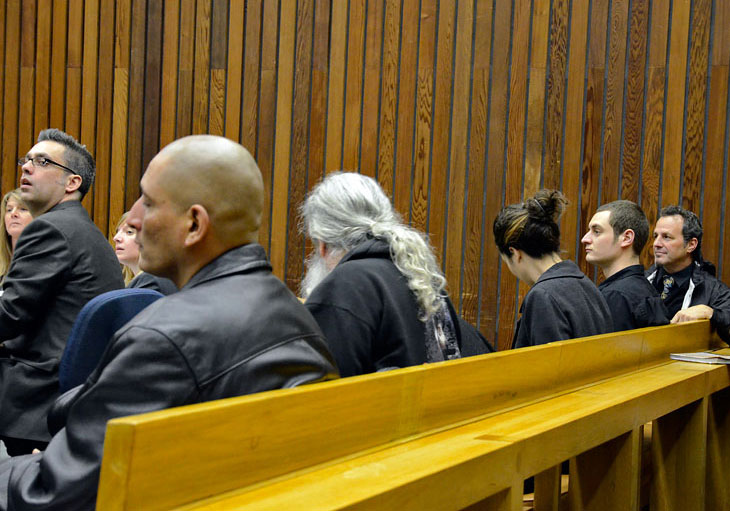 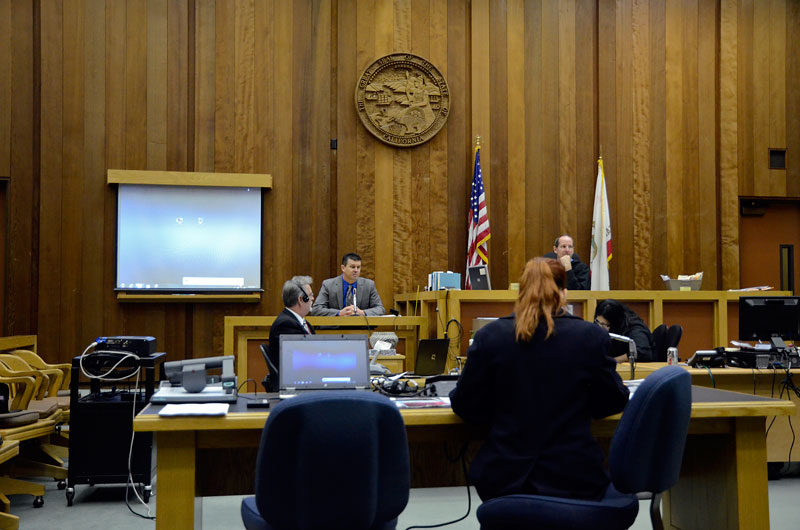 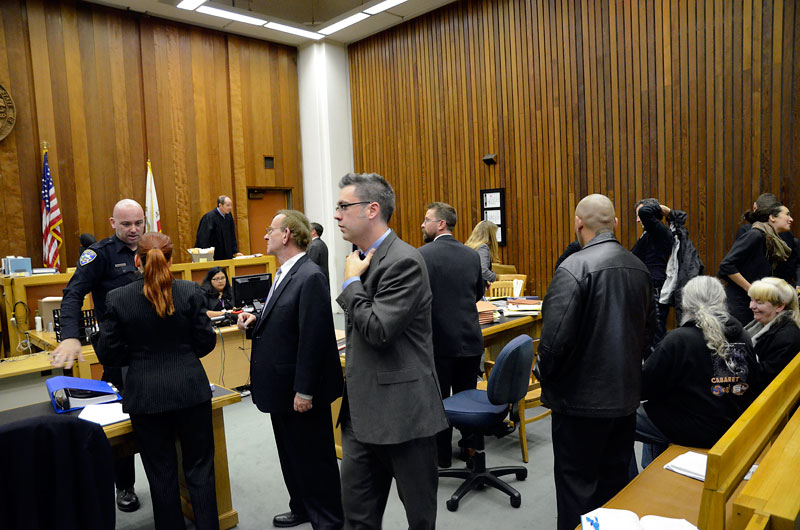 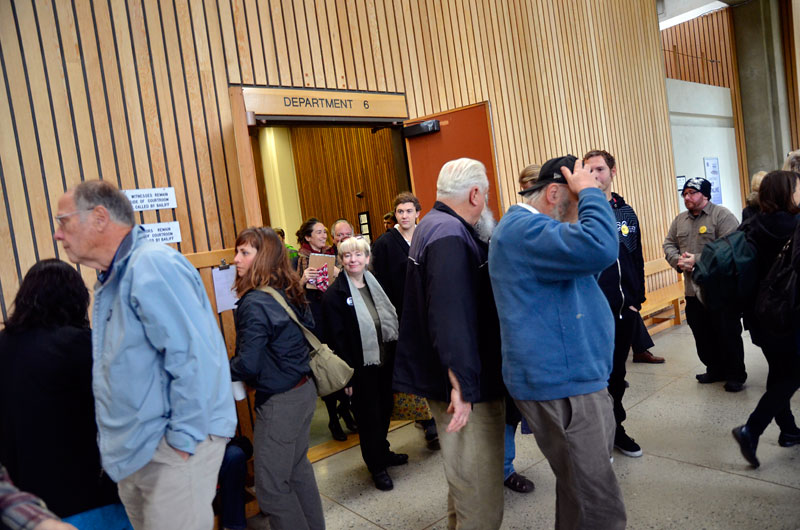 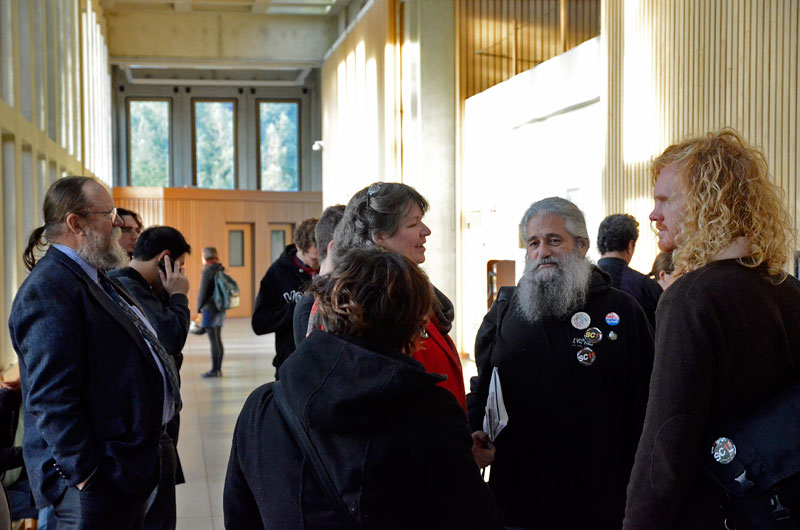 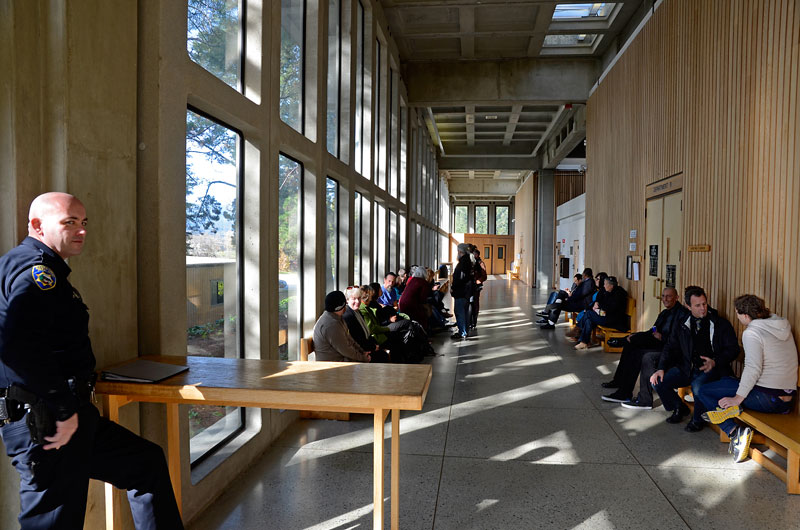 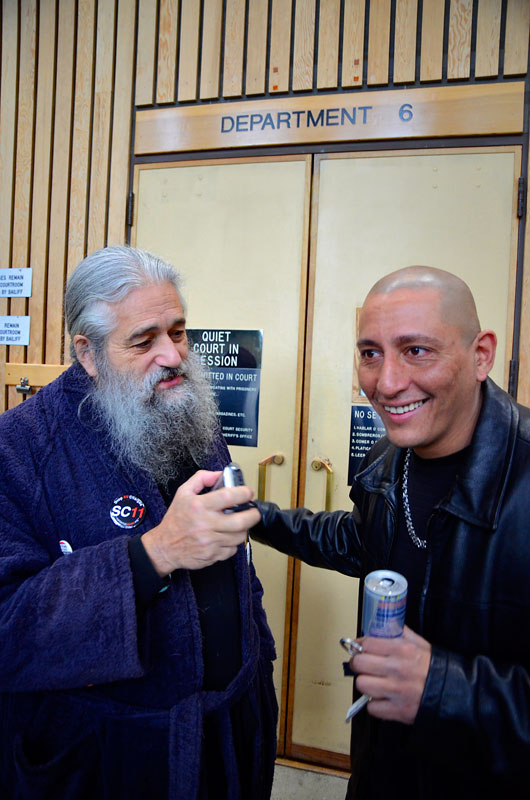 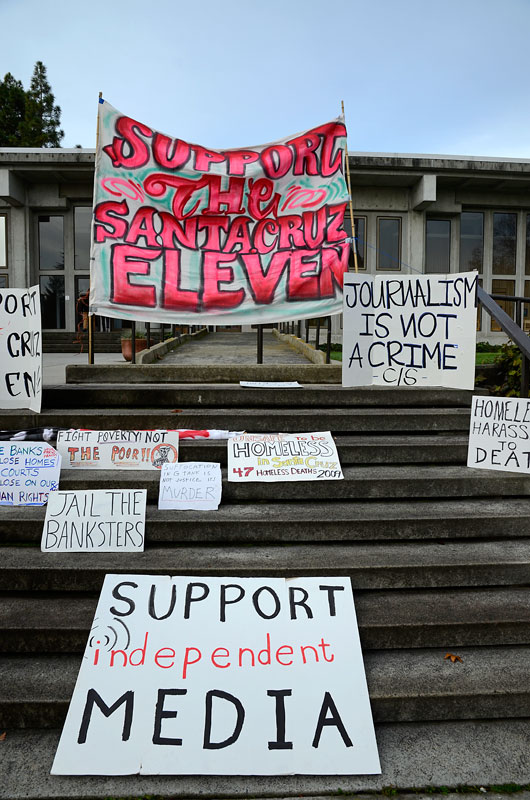 §Court Separation
by Alex Darocy (alex [at] alexdarocy.com) Thursday Jan 10th, 2013 6:14 AM
I have interviewed several defendants about Desiree Foster sitting in the audience of the court during the preliminary hearings, and it is still unclear to them how it was decided that she sit there. Though she was seated there fully with the judge's knowledge, I cannot say definitively that it was due to a "mandate," so I am retracting my use of that word in the comments section of this article, and I am also retracting the statement in the article that she was "forced" to sit in the audience section..
Add Your Comments
LATEST COMMENTS ABOUT THIS ARTICLE
Listed below are the latest comments about this post.
These comments are submitted anonymously by website visitors.